In Flint Crisis, Questions Grow Over Quest For Pipeline

Without the pipeline, the Flint crisis almost certainly would never have happened. 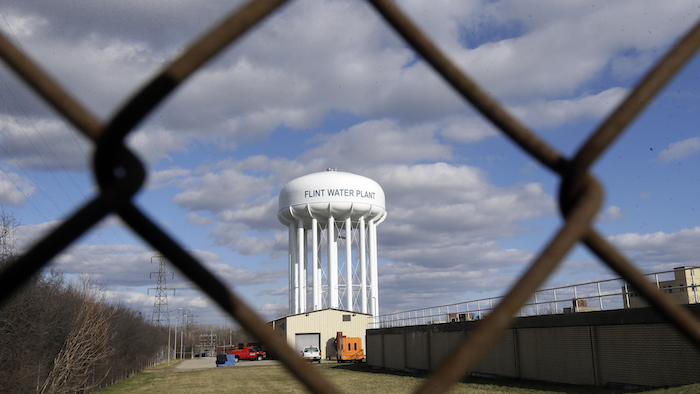 FLINT TOWNSHIP, Mich. (AP) — With drab olive chairs and worn carpet, the conference room in the low-slung administrative building near the Genesee County wastewater treatment plant isn't fancy, but it showcases one of Jeff Wright's greatest treasures: Permit No. 2009-001.

Wright, a wiry man with trademark moustache and slicked-back hair, is the county drain commissioner, a title that dates to Michigan's early days of draining swamps. The job gives him sway over almost everything involving water, from diverting runoff to building major sewer projects.

The permit framed on the wall will allow a new 74-mile pipeline to draw water from Lake Huron to the county and its largest city, Flint, the realization of a dream Wright has nurtured for most of his 15 years in office.

For months, national attention has focused on how children were poisoned with lead-tainted drinking water in the onetime auto manufacturing powerhouse of 100,000 people. But without the pipeline, the Flint crisis almost certainly would never have happened. The contamination occurred when Flint switched from the metropolitan Detroit utility system to a temporary water source, the Flint River, until it could connect to the new pipeline.

That is raising questions about the $285 million project, which is still under construction and has yet to deliver a drop of water. A look at its history shows the pipeline is rooted in local officials' long-simmering resentment toward much-bigger Detroit, an hour away, and was built because of a resourceful politician's ambition and perseverance.

So far, the project has received comparatively little notice in the scandal. But a governor's task force recently recommended a formal review of the pipeline's approval.

"Why would it be appropriate for a several-hundred-million-dollar pipeline to be developed in a region swimming in (water) capacity and populated by two financially distressed cities?" said task force member Eric Rothstein, referring to the available Detroit water system that had supplied Flint for almost 50 years. "It all gives me a tremendously uneasy feeling." After months of national attention on lead-tainted drinking water in Flint, many are starting to ask questions about the 74-mile pipeline being built from Lake Huron to the struggling former auto manufacturing powerhouse. (David Guralnick /Detroit News via AP, File)

Asked about the new pipeline, state Attorney General Bill Schuette, said recently that "no issue is off the table" in his criminal investigation of the Flint crisis, though "there are no targets."

Speculation is also swirling around Wright and his motives. That's not surprising, some say, because of his long reputation as a political mover and his colorful history, which includes being an FBI informant in the corruption probe of a Michigan political consultant nine years ago.

Wright, 62, scoffs at Internet gossip about the project being a power grab by an ambitious politician or about his ability as the pipeline authority's CEO to approve construction contracts. Companies that have received almost $120 million in pipeline-related contracts and subcontracts have donated more than $200,000 to Wright's campaign fund since 2008, according to public documents.

"I read where I owned a pipe manufacturer. I owned the engineering firm, and I bought up all the land." None of those reports was accurate, said Wright, adding that all contracts were competitively bid.

Susan J. Demas, who publishes a Michigan political newsletter, said questions surrounding Wright are inevitable because of the scope of the project and his past, regardless of whether it's fair.

"The pipeline itself is a huge infrastructure project, so I think there are concerns (about whether) everything was done on the up and up," she said.

Wright says it's about cheaper, more reliable service for his county and a financially devastated city that has lost thousands of auto jobs.

"We don't have a problem with anyone coming in and reviewing anything they want," said Wright.

Flint will pay $7 million a year for water, half what Detroit charged in the 2013-14 billing year, according to Wright. Detroit officials say they made competitive offers, but it was clear that Wright didn't really want to negotiate.

If this is "about local control, political preference or to serve agricultural purposes, then I understand," but not if it's about cost, said former Detroit Water and Sewer Department Director Sue McCormick.

Until the 1960s, Flint drew its drinking water from the local Flint River. But with the General Motors plants in town booming and the city's population edging toward 200,000, officials proposed building a pipeline to Lake Huron. When that effort collapsed over a profiteering scandal, Detroit built it instead.

Local officials never got over the disappointment.

"The minute we started paying for the water, we wanted our own pipeline," said Wallace Benzie, a 90-year-old retired engineer who worked on water and sewer projects for Genesee County. "You want to be able to control your own destiny."

Wright grew up in a blue-collar Flint suburb, left college to join the drain commissioner's office, worked his way up and won election to the top spot in 2000. He runs the agency and the pipeline authority without using email, voicemail or text messaging, doing business mostly in conversations.

He said building a new pipeline became a priority for him only after a power outage in 2003 left the area without water for several days, and after steep rate increases from Detroit, which was struggling with its own financial problems.

His office commissioned engineering studies. He attended neighborhood get-togethers and city council meetings, courting Flint officials with promises that the pipeline would save the city millions and perhaps lure industries back to the area. He persuaded two rural counties and another city to join the coalition, with visions of selling water to farmers and other industries.

And after the state seized control of Flint's finances in 2011 because of growing debts, Wright rescued the proposal by convincing then-state Treasurer Andy Dillon that it was Flint's cheapest option.

"To me, it was just a unanimous desire on the part of the locals," said Dillon, adding that he was "lobbied heavily" by Wright.

In 2014, the city prepared for the water switch by temporarily turning back to the Flint River until the new pipeline could be completed in mid-2016. But state officials mistakenly told them not to add a chemical to prevent lead from leaching out of old pipes.

It's unclear when Flint, which has been using Detroit's water since October, will finally connect to the pipeline because of concerns about its water-treatment plant.

But Wright and other pipeline supporters say they're still optimistic the project will be a boon, not only for Flint but for the region and its agriculture.

"We're getting very close to having the perfect water source," said Greg Alexander, drain commissioner in Sanilac County and chairman of the water authority building the pipeline. If a company moved in to process the county's crops, it would be "the answer to our prayers."