Washington could become the first state in the nation to impose a direct tax on carbon emissions from fossil fuels such as coal, gasoline and natural gas. 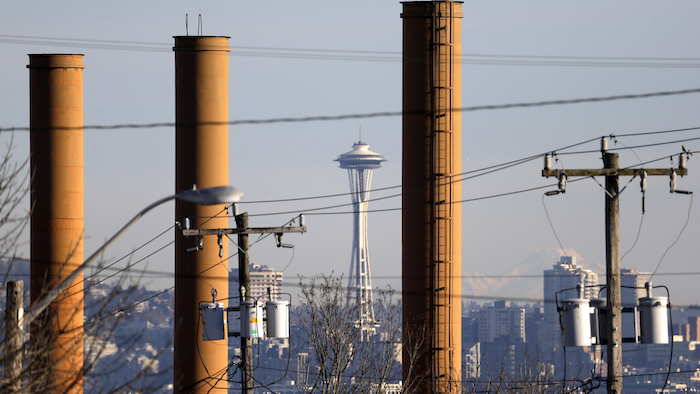 SEATTLE (AP) — Washington could become the first state in the nation to impose a direct tax on carbon emissions from fossil fuels such as coal, gasoline and natural gas.

A ballot measure before the state Legislature would create a carbon tax of $25 per metric ton of fossil fuel emissions burned in Washington, while reducing taxes.

The grass-roots group Carbon Washington — which gathered more than 350,000 signatures to qualify the initiative — says a carbon tax is the best way to reduce emissions and tackle global warming. It says the tax encourages people and businesses to switch to cleaner energy by making fossil fuels more expensive.

The proposal is designed to be "revenue neutral," meaning that though tax revenues would increase for fossil fuels, it would mostly be offset by a decrease in other tax revenues. In this case, revenues would be returned to people and businesses by cutting the state sales tax by one point, virtually eliminating business taxes for manufacturers and providing rebates for working families, supporters say.

A state economic analysis, however, estimates the measure could cost the state about $915 million in lost revenues over the first four years. Initiative sponsors maintain that several assumptions used in the state's analysis are wrong.

An official with the Office of Financial Management told lawmakers this month there has been "back and forth" but still a lot of disagreement between parties.

"Our intent is to be revenue neutral and we're very close to being revenue neutral," said Joe Ryan, co-chair of Carbon Washington. The nonpartisan group has raised nearly $815,000 since early 2015 with donations coming from 860 unique contributors.

Lawmakers and other groups, however, worry the loss in revenues would hurt the state's ability to pay for education, social services and other programs.

"I think there's agreement that I-732 isn't workable because of how much it would reduce state revenues," said Rep. Joe Fitzgibbon, D-Burien, who chairs the House Environment Committee. "We have to trust the experts."

Washington's carbon tax is modeled after one in British Columbia. Carbon-tax proposals have been introduced in legislatures in Vermont, Massachusetts and New York.

In Washington state, I-732 supporters say it is the most efficient, less bureaucratic way to reduce carbon emissions. They also see the November election as their best shot at taking climate action.

A coalition of diverse groups announced last fall that it would pitch its own carbon-pricing plan that would reinvest revenues in clean-energy projects and help low-income communities that are disproportionately hurt by climate change. But the Alliance for Jobs and Clean Energy hasn't released specifics yet, and some members say it appears unlikely there will be a competing ballot initiative.

Last-minute talks between Carbon Washington and the Alliance to collaborate on one ballot measure fizzled at the end of last year.

Sen. Doug Ericksen, of Ferndale, who chairs the Senate committee that heard the ballot measure this month, has said the carbon tax, combined with other current and proposed rules, would hurt businesses and people.

Energy-intensive manufacturing such as steel mills and food processers, natural gas power plants, refineries that use fossil fuels, for example, would pay the tax, though supporters say some of those costs will be offset by reduced taxes elsewhere. The tax wouldn't apply to electricity from renewables like hydro, wind or solar power.

On Friday, Ericksen said he scheduled upcoming hearings in his committee in case an alternative 732 proposal develops. "It's definitely a longshot but it doesn't mean people aren't doing a lot of work," he said.