Washington state voters will likely decide in November whether to charge industrial emitters a fee for their carbon pollution, the latest effort yet to pass a carbon-pricing measure to fight climate change. 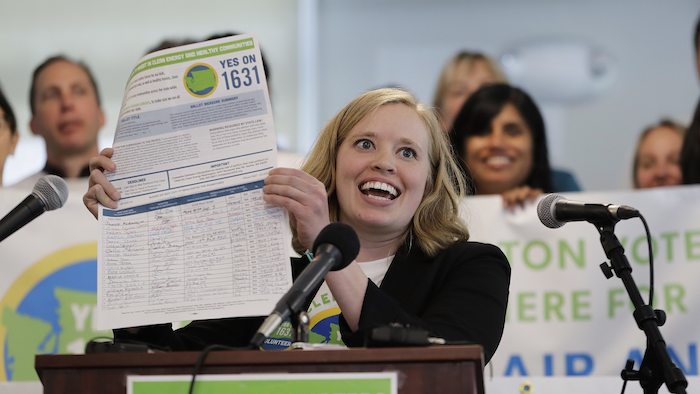 In this May 10, 2018, file photo, Abigail Doerr, campaign director for Yes on 1631, holds up an initiative petition with signatures on it, at a rally to kick off the campaign for "Yes on 1631," in Seattle Washington. Image credit: AP Photo/Ted S. Warren, File

Washington state voters will likely decide in November whether to charge industrial emitters a fee for their carbon pollution, the latest effort yet to pass a carbon-pricing measure to fight climate change.

A broad, diverse coalition of tribes, community, labor and environmental groups say they've gathered enough signatures to put a "carbon fee" measure on the ballot. It comes two years after voters in this state rejected a carbon tax that would have been the first in the nation.

Sponsors of Initiative 1631 say it will hold corporate polluters accountable. Money raised from fees would be spent on strategies that reduce greenhouse gas emissions, including projects for renewable energy, forests and other natural resources.

Critics warn that implementing a fee will raise gasoline and energy prices on consumers, calling it a massive tax increase on families that expands government while negligibly reducing overall global carbon emissions.

Supporters on Monday delivered 375,000 petition signatures to the Secretary of State's office in Olympia. The campaign will need nearly 260,000 valid voters' signatures to be certified for the ballot.

Washington state has been on the forefront of policy to curb greenhouse gas emissions blamed for global warming. But carbon-pricing efforts backed by Gov. Jay Inslee, a Democrat, and other lawmakers haven't gained much traction. Inslee proposed but failed to get support for a carbon tax bill in the most recent legislative session.

Now, environmental, community, faith-based and other groups — some of whom lined up against the carbon tax measure that failed in 2016 — see this citizens' initiative as the best opportunity to tackle climate change and move away from fossil fuel use.

"We are putting before voters a responsible solution to protect the health of our children, our communities and our future," said Aiko Schaefer, who directs Front and Centered, a coalition of about 100 groups, one of many that helped write the initiative. She said they'll qualify and win because they've built the largest and most diverse coalition in Washington's political history.

The proposal would charge $15 per metric ton on carbon emissions starting in 2020, raising about $1 billion. It targets about 100 industrial emitters such as oil refineries and natural gas power plants. The fee would increase by $2 a year in 2021 and end if the state meets its greenhouse gas emissions goals in 2035.

Gary Chandler, vice president of governmental affairs for the Association of Washington Business, said businesses are already doing a lot to reduce their carbon footprint.

The state with its abundance of hydroelectric power is one of the cleanest, he said, and has passed several laws to reduce carbon emissions, including renewable energy standards.

Chandler said the actions will have a negligible impact on overall global emissions, while businesses in the heavily trade-dependent state will be at a competitive disadvantage with those that won't have to pay the fee.

But Fawn Sharp, president of the Quinault Indian Nation, called climate change one of the most significant issues facing this generation and said the initiative is needed to address the crisis. She and other tribal and communities of color leaders recently formed a political action committee to support I-1631 and other efforts.

Sharp said there's a lack of political leadership in Olympia and Washington, D.C., to deal with the impacts of climate change that are already happening, such as more intense wildfires.

This initiative differs from previous proposals because it requires money to be spent on clean energy and natural resources, rather than lower taxes or pay for transportation, education and other state services.

A bulk of the money would be used to reduce carbon emissions, including solar and wind power, energy efficiency projects, zero-emissions vehicles, public transit or high-speed rural broadband connections.

Money would be spent for projects that protect natural resources, such as reducing flood risk, improving fish habitat or improving forest health. Money is also included to help prepare communities for the challenges of climate change.

The initiative includes some exemptions, including for marine and aviation fuels. The state's only coal-fired power plant, which is owned by TransAlta, would also be exempt because of an agreement hammered out with environmental groups that set a schedule for the plant's closure by 2025.