A new set of Chinese tariffs on U.S. seafood including items made from shark fins could jeopardize what remains of the American industry for the controversial products. 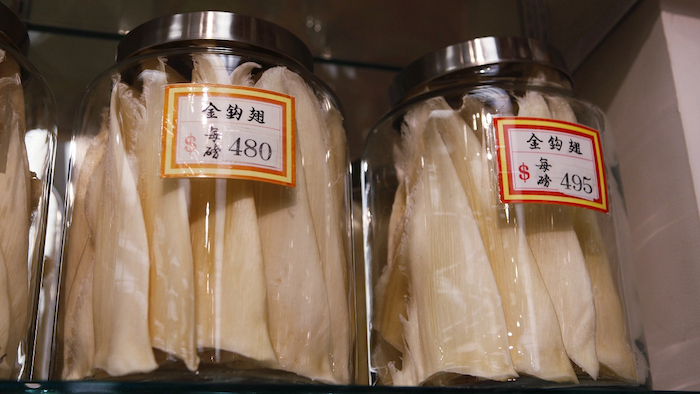 A new set of Chinese tariffs on U.S. seafood including items made from shark fins could jeopardize what remains of the American industry for the controversial products.

China announced the 25 percent tariffs in mid-June that are expected to apply to exported American goods such as lobster and salmon beginning in July. They also will apply to whole or cut shark fins, as well as shark fin products that are canned or preserved, according to a Chinese government website.

The U.S. has long banned "shark finning," a practice long reviled by animal welfare groups that involves removing the fin from a shark and discarding the animal at sea. It is still legal to remove and sell the fin of a legally harvested shark after it is brought to land.

The steep tariffs, which could turn away business from U.S. exporters, might have implications for American shark fishermen and processors. China is one of the biggest buyers of shark fins, as the product is used to make shark fin soup, an Asian delicacy.

"My sense is that's going to decrease demand for sustainably fished U.S. shark fins, and increase demand from countries with less sustainable fisheries," said Shaun Gehan, an attorney for Sustainable Shark Alliance, which represents shark fishermen and dealers. "It'll just be a hardship for the small fish houses and the fishermen that participate in this fishery."

Hundreds of fishermen in the U.S. seek numerous species of shark for their meat and fins in a tightly regulated fishery. The fins represent about a quarter of the value of a shark, and fins that U.S. fishermen harvest are often shipped to Asia for processing.

Animal advocates and environmentalists have long called for a complete ban on the shark fin trade because they believe it jeopardizes threatened species of shark. Oceana campaign director Whitney Webber said a national fin ban would "reinforce the status of the United States as a leader in shark conservation."

But China's new tariffs could have the opposite effect, potentially increasing demand for shark fins from countries where fisheries are not as well managed, said Robert Hueter, a senior scientist and director of the Center for Shark Research at Mote Marine Laboratory in Sarasota, Florida.

"They can get fins from anywhere, and they don't need it from us," Hueter said. "This is hurting U.S. fishermen, not really solving any kind of problem."

Beijing announced the tariffs, which also apply to agricultural products and cars, as retaliation against President Donald Trump's tariff increase on Chinese products. The two countries, the world's two largest economies, are in the midst of escalating trade hostility.

But some in the U.S. shark fin business do not believe fins will be a casualty of a U.S.-China trade war. Raymond Wong, a New York-based shark fin dealer, said the tariffs can be easily bypassed by shipping fins to Hong Kong, which is a common destination for them anyway.

"If I get dogfish fin from Maine or wherever, I can send it to Hong Kong," he said. "I've been sending dogfish to Hong Kong for a while. I am OK."