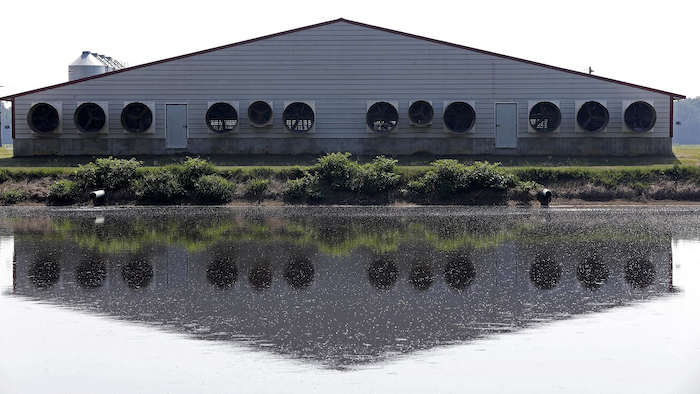 In this July 21, 2017, file a hog house is reflected in an adjacent waste pond at a farm that has hogs owned by Smithfield Foods in Farmville, N.C. Image credit: AP Photo/Gerry Broome, File

Lawmakers acted weeks after neighbors won a $51 million jury verdict from pork giant Smithfield Foods after decades of complaints about horrible smells and other nuisances to politicians friendly to the pork industry. That was cut to about $3 million because North Carolina law limits damages meant to punish misdeeds.

The second of 10 similar lawsuits to be heard this year now is in its second week before a jury in a Raleigh courtroom. About two dozen cases filed by more than 500 eastern North Carolina neighbors have spent years reaching this stage.

Lawyers have targeted the hog-production division of Virginia-based Smithfield Foods — not the farm operators — because they said the company used strict contracts to dictate how farmers raise livestock that Smithfield owns. Smithfield is owned by Hong Kong-headquartered WH Group, which generated $22 billion in revenues last year, the company reported in March.

"It's time we stand up for the backbone of this country and this state," Jackson said. "It's time that we tell the farmers and we tell the corporations that is buying these crops that we support them, that we welcome them to North Carolina. We want to keep them here. We don't want tumbleweeds rolling down the streets in these rural towns. We know how hard it is to keep them going."

The law also would further insulate turkey farmers near Sen. Tommy Tucker's Union County home who raise and ship 10 million birds a year. He said he regularly smells turkey manure inside his community of gated homes, but "my farmer friends tell me, Senator, that smells like money to us."

Since the new legal protections were unveiled Tuesday, two Republican lawyers and former politicians warned lawmakers they were stripping property rights from rural residents. Neighbors have little to defend themselves from offensive conduct of livestock operations except nuisance lawsuits, said former state Supreme Court justice Robert Orr and Paul Stam, the former No. 2 leader of the state House.

"This whole thing that it's the eaters versus the farmers is a false narrative. It's nuisance-creators versus property owners," Stam said in an interview Thursday. "The key here is whether the (General) Assembly really believes in property rights or not. We say we do. We'll find out."

Warnings that the lawsuits could undercut rural economies are hyperbole, Orr said.

"I think those who are being sued over alleged nuisances inevitably raise that specter," Orr said. "But the law says you are not supposed to utilize your property in such a way that it impacts your neighbors."