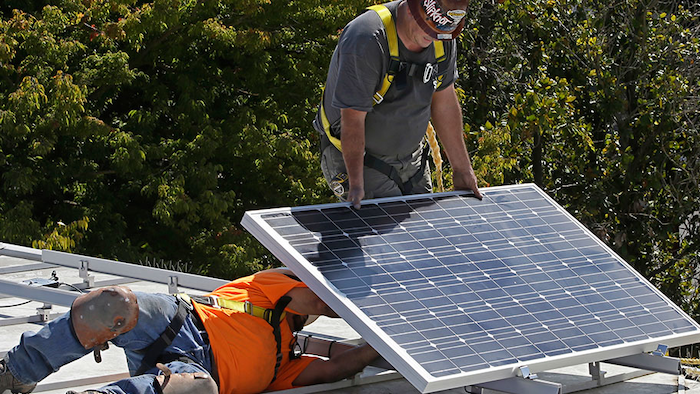 Republican Dean Heller of Nevada and Democrat Martin Heinrich of New Mexico introduced a measure that calls for duties and tariffs for solar cells to revert to previous rates and to allow for companies affected by the tariffs hike to seek reimbursements.

The senators contend that the higher tariffs are stifling investment in the domestic solar market.

"We need to look at the bigger picture of the American solar industry and its role as a major employer of American workers," Heinrich said.

The Trump administration moved in January to impose higher taxes on imported panels, arguing that U.S. manufacturers were being crushed by an influx of cheap solar cells and modules from China. That country went from producing 7 percent of the world's solar cells in 2005 to nearly 70 percent last year.

Heinrich and Heller join a bipartisan contingent of House members from Nevada, South Carolina and California who filed similar legislation earlier this year.

Nevada Congresswoman Jacky Rosen, who is leading that effort, also has voiced concerns about slowing investment in an industry that she says has boosted employment and led to more affordable electricity in her state.

It's unclear whether the proposals will advance, but they have the backing of the Solar Energy Industries Association. Abigail Ross Hopper, the president and CEO of the trade group, described the tariffs in a statement issued Thursday as ill-conceived.

The higher tariffs have prompted the cancellation or delay of some projects and that has resulted in decisions to delay hiring or reduce the number of jobs initially anticipated, the industry group said. Other projects are moving forward in part because of declining costs prior to the new tariffs being imposed.

The U.S. Energy Department on Thursday launched a new $3 million competition aimed at revitalizing solar manufacturing in the U.S. The idea is to support entrepreneurs with the development of new products that will be made in America.

Ross Hopper said the competition is a good way to spur more innovation in an industry known for its ingenuity.