"It is not my understanding that we drive Ford Escorts into battle." 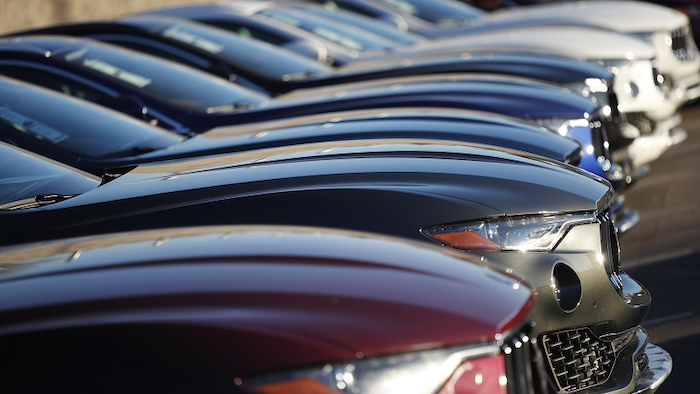 President Donald Trump suspects they might. He's ordered the Commerce Department to investigate whether the peril is dire enough to justify tariffs or quotas on imports of foreign-made vehicles and auto parts to the United States.

The announcement sent shares of Japanese and European automakers tumbling in global stock markets Thursday. It also aggravated trade tensions between the Unites States and allies like Germany and Japan. And most economists and trade analysts ridiculed any notion that national security might be imperiled by the flow of vehicles imported to the United States.

"It's utter foolishness," said Philip Levy, senior fellow at the Chicago Council on Global Affairs and a former White House trade adviser. "It is not my understanding that we drive Ford Escorts into battle."

WHAT DID THE PRESIDENT DO?

Trump ordered Commerce Secretary Wilbur Ross to investigate whether imported cars, trucks and auto parts threaten U.S. national security. If Commerce finds that they do, it can recommend trade sanctions, including tariffs and quotas. This investigation could take months.

A person familiar with the discussions said the president has suggested seeking new tariffs of 20 to 25 percent on auto imports. The person spoke on condition of anonymity and was not authorized to speak about private deliberations.

The Trump administration is turning to a little-used weapon in trade policy: Section 232 of the Trade Expansion Act of 1962. It empowers the president to restrict imports and impose unlimited tariffs if Commerce finds they threaten national security.

HAS THE U.S. DONE THIS BEFORE?

In March, after an earlier Commerce investigation, the Trump administration dusted off Section 232 authority to slap tariffs on imported steel and aluminum.

Until then, the United States had pursued only two such inquiries since joining the Geneva-based World Trade Organization in 1995. Both times — in a 1999 case involving oil imports and a 2001 case involving iron ore and steel imports — the Commerce Department refused to recommend sanctions.

But there was an unwritten agreement that WTO member countries would use the national-security justification sparingly to avoid abuses. Now that Trump has broken the taboo, critics fear that other countries will use it, too, to impose sanctions.

Relying on imports can theoretically leave a country vulnerable in times of war: Before imposing tariffs on imported aluminum, for instance, the Commerce Department found that only one home-grown smelter in the United States was capable of producing the high-purity aluminum used to upgrade F-18, F-35 and C-17 military aircraft. If, in theory, that smelter were to close, the military would have to scramble to find a replacement. The tariffs were meant to protect domestic aluminum manufacturers and encourage production.

In the case of autos, the Trump administration seems to be defining national security rather broadly. Ross, speaking Thursday on CNBC, defined it as "the economy, to include the impact on employment, to include a very big variety of things that one would not normally associate directly with military security."

But even the auto industry — an intended beneficiary of the tariffs — is skeptical of such reasoning.

"We are confident that vehicle imports do not pose a national security risk to the U.S.," the Alliance of Automobile Manufacturers said in a statement.

WOULD THE TARIFFS HELP AUTOWORKERS?

Tweeting Wednesday on the eve of his announcement, Trump predicted that the U.S. will "win big" in NAFTA talks and "our auto workers are going to be extremely happy."

But critics warn that tariffs could actually hurt the industry and even cost jobs by forcing up auto prices and reducing sales. It would take years for automakers to build factories to move production to the U.S., an expensive proposition that companies might avoid.

"Consumers may opt to delay their vehicle purchases until this administration is no longer in office or simply purchase a used imported vehicle as there is a flood of off-lease vehicles hitting the market," said Jeremy Acevedo, manager of industry analysis for the Edmunds.com auto website. "Either way, this could represent a lose-lose situation for automakers and consumers alike." (Edmunds regularly provides content for distribution by The Associated Press.)

Dennis Williams, president of the United Auto Workers union was cautiously pleased by Trump's announcement. But even he sounded wary.

"I welcome the fact that they're investigating this and they're even considering the tariffs, if they need to be done," Williams said.

At the same time, he said he worried about retaliation. "I'm often cautious about tariffs, because we do some exporting as well in the agricultural and other fields."

HOW STRONG IS THE ADMINISTRATION'S CASE?

"There's absolutely no case," said Gary Hufbauer, a trade analyst with the Peterson Institute for International Economics. "This is either a bad joke or, more likely, a negotiating tactic to persuade Europe, Mexico and Canada to make other concessions" in trade standoffs.

The U.S. auto industry has rebounded strongly from the Great Recession of 2007-2009. Sales and earnings have been at or near record levels for the past few years. Auto and auto parts manufacturers have added 339,000 jobs since employment hit bottom in June 2009.

"It's hard to see what the national security threat is from Priuses from Japan," said Rod Hunter, a partner at Baker McKenzie and a former economic official on the National Security Council.

COULD THE TRUMP TEAM HAVE OTHER MOTIVATIONS?

The investigation into auto imports is widely seen as a tactic to pressure Mexico and Canada in negotiations over a rewrite of the North American Free Trade Agreement. NAFTA negotiations began in August. But they have stalled, in part because of the U.S. insistence on measures to encourage automakers to move production from Mexico to the United States.

Canada and Mexico may be tiring of the administration's unending efforts to pressure them into concessions, especially if they conclude that Trump's national security argument is weak and vulnerable to a legal challenge.

That depends. The Trump administration diluted the impact of March's steel and aluminum tariffs by giving trading partners, including the European Union, Canada and Mexico, a reprieve until June 1. It might end up offering exemptions again, which could blunt any economic impact.

Trump argues that protecting the U.S. auto industry would put more Americans to work in car factories. But most economists are skeptical. Unemployment is already at a 17-year low 3.9 percent. Many employers are scrambling to find qualified workers. And today's auto plants are highly automated and don't employ as many workers as they did in the heyday of American manufacturing in the 1970s.

Moreover, the tariffs would affect the imported parts that U.S. manufacturers rely on, thereby driving up costs.

Tariffs also amount to a tax on imports and could drive up the price American consumers pay for cars.

"Raising taxes on Americans who choose to buy imported cars or trucks is a bad idea," said Republican Sen. Pat Toomey of Pennsylvania. "Doing it under the false pretense of national security — Section 232 — is an even worse idea, as it invites retaliation and weakens our credibility on actual trade disputes."

Mike Householder and Krisher contributed from Detroit. Ken Thomas in Washington also contributed to this report.