Apple CEO Goes To Reno For Groundbreaking Of Warehouse 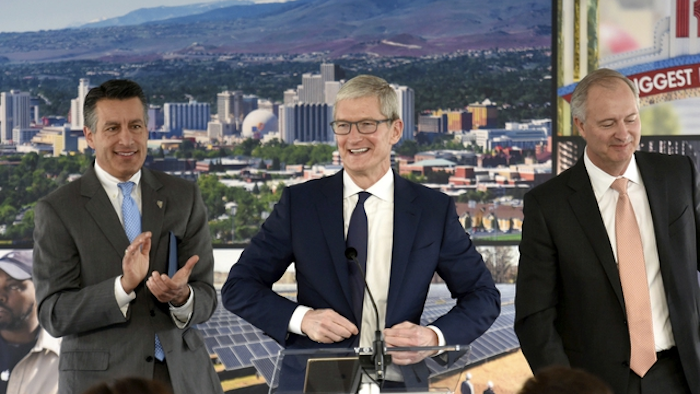 Apple CEO Tim Cook joined Nevada Gov. Brian Sandoval and Reno Mayor Hillary Schieve at a groundbreaking ceremony for a new $4 million warehouse in downtown Reno Wednesday as the company announced plans to invest $350 billion in the U.S. economy over the next five years.

Sandoval, Schieve and others praised the move and Apple's earlier commitment to double the size of its existing $1 billion data center east of Reno as important milestones in Nevada's economic recovery from being one of the states hardest hit by the recession seven years ago.

"We are pleased to be part of transforming downtown Reno to the vibrant city it should be,'" Cook said at the ceremony for the shipping and receiving facility a few blocks east of the downtown casino district. "'Our commitment to Reno and northern Nevada is representative of the commitments we've made throughout the U.S."

Cook said the company's five-year U.S. plan will generate 20,000 new Apple jobs and include more than $10 billion for projects like the Apple data center in Washoe County along U.S. Interstate 80 east of Reno and Sparks.

Apple announced plans for the downtown warehouse last May at the same time it announced plans for a $1 billion expansion of that data center, which will include 100 permanent workers, doubling its workforce. About 300 temporary construction jobs also will be created, the company said. 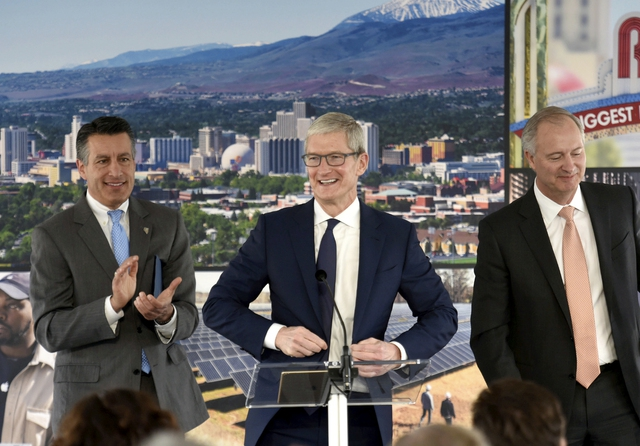 The 5-year-old $1 billion data center is located in the Reno Technology Center along U.S. Interstate 80. It's between Reno and the Tahoe Reno Industrial Center where Tesla's giant battery factory is based about 15 miles (24 kilometers) east of Reno-Sparks. The warehouse will be used to ship equipment to the expanding facility.

Apple was awarded $89 million in state property and sales tax abatements when it committed to the data center in 2012. Building a facility in downtown Reno was necessary for it to fully realize all the potential tax breaks.

Sandoval said earlier that the data center was the first major economic development success in northern Nevada and "helped place this region on the technology and innovation map."

Since that time, Nevada has added nearly 250,000 jobs statewide, the governor said Wednesday.

Sandoval said he told Cook — whose appearance was kept secret until about 90 minutes before the event — that "it's like someone coming from Mount Olympus to Reno for a day."

Steve Hill, director of the Governor's Office of Economic Development, said Nevada's economy was "really the worst in the U.S." seven years ago, when it led the nation in unemployment, foreclosures and bankruptcies. It now is among the fastest-growing states in terms of job growth and wages.

"Apple's decision in 2012 to invest in Nevada, to locate their data center here really marked the turning point and was the catalyst for moving this region and frankly the entire state forward," Hill said.