California Rolls Its Own Recreational Pot Sales Out For 2018

Ceremonial ribbon cuttings marked the occasion Monday as the nation's biggest producer of illicit marijuana moved from the shadows toward a regulated market. 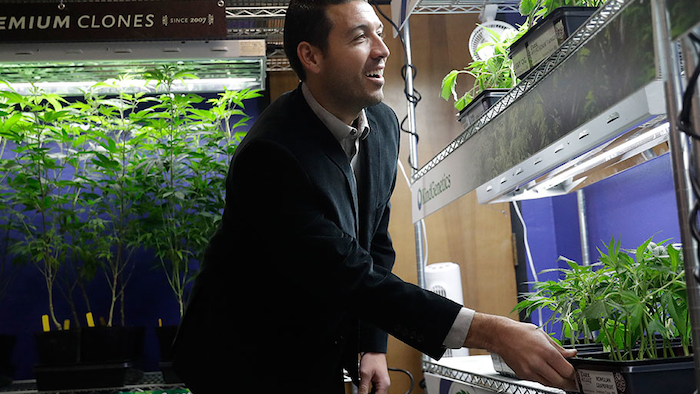 SACRAMENTO, Calif. (AP) — From a pot shop in Santa Cruz that hung a banner proclaiming "Prohibition is Over!" to one in San Diego handing out T-shirts showing the first moon landing and declaring a "giant leap for mankind," the Golden State turned a shade greener with its first sales of recreational marijuana.

Ceremonial ribbon cuttings marked the occasion Monday as the nation's biggest producer of illicit marijuana moved from the shadows toward a regulated market. Freebies and food greeted those who waited in long lines to get their hands on weed with names like "Oh Geezus" and "Banana Breath."

Cargile's shop, A Therapeutic Alternative, opened at 9 a.m. with the celebratory cutting of a red ribbon — a symbolic gesture that could be seen as a nod to those who cut through red tape in time to open the doors to a new era.

First-day sales were brisk in shops lucky enough to score one of the roughly 100 state licenses issued so far, but would-be customers in some of the state's largest cities encountered reefer sadness. 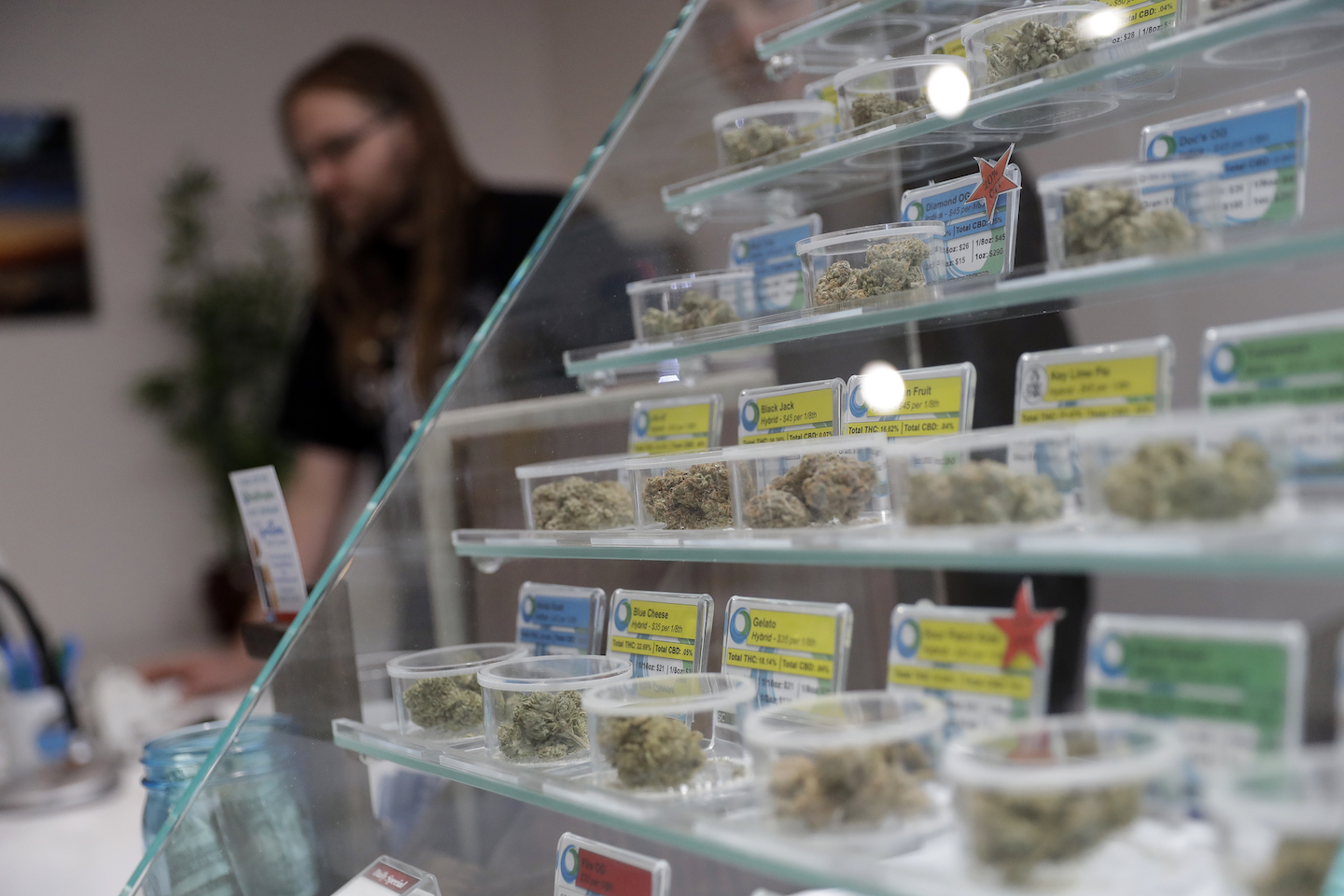 In this Dec. 29, 2017, photo, various kinds of marijuana strains are displayed at the KindPeoples dispensary in Santa Cruz, Calif. Californians may awake on New Year's Day to a stronger-than-normal whiff of marijuana as America's cannabis king lights up to celebrate the state's first legal retail pot sales. (AP Photo/Marcio Jose Sanchez)

The state and local governments still have a lot of work ahead to get the massive industry running that is projected to bring in $1 billion annually in tax revenue within several years.

Charles Boldwyn, chief compliance officer of ShowGrow in Santa Ana, which opened to retail customers Monday, said he's concerned that a delay in local and state approvals could create a shortage of products for consumers.

"We're looking at ... hundreds of licensed cultivators and manufacturers coming out of an environment where we literally had thousands of people who were cultivating and manufacturing," Boldwyn said. "So the red tape is a bit of a bottleneck in the supply chain."

Regulators at the Bureau of Cannabis Control worked through the holiday to try to process 1,400 pending license applications for retail sales, distribution, testing facilities and other businesses, bureau spokesman Alex Traverso said.

A flood of applications for shops in LA and San Francisco is expected after being approved locally. Because Los Angeles is the biggest market in the state, some of those shops will be licensed by the state more quickly than others already in line, Traverso said.

The status of Los Angeles shops highlights broad confusion over the new law.

Los Angeles officials said they won't begin accepting license applications until Wednesday, and it might take weeks before any licenses are issued. That has led to widespread concern that long-established businesses would have to shut down during the interim.

Attorneys advising a group of city dispensaries have concluded those businesses can legally sell medicinal marijuana as "collectives," until they obtain local and state licenses under the new system, said Jerred Kiloh of the United Cannabis Business Association, an industry group.

It wasn't immediately clear how many of those shops, if any, opened.

"My patients are scared, my employees are scared," said Kiloh, who owns a dispensary in the city's San Fernando Valley area.

With sales lighting up around California, the nation's most populous state joined a growing list of others, and the nation's capital, where so-called recreational marijuana is permitted even though the federal government continues to classify pot as a controlled substance, like heroin and LSD.

The state banned what it called "loco-weed" in 1913, though it has eased criminal penalties for use of the drug since the 1970s and was the first state to legalize marijuana for medicinal purposes in 1996.

California voters in 2016 made it legal for adults 21 and older to grow, possess and use limited quantities of marijuana, but it wasn't legal to sell it for recreational purposes until Monday.

The signs that California was tripping toward legal pot sales were evident well before the stroke of midnight.

In shops where recreational weed was on the menu, former medical marijuana patients got in line with pot-heads and hippies, as well as first-timers willing to give legal weed a chance.

Heather Sposeto, 50, who is not a marijuana user, wanted to see the hype around legal weed, so she went to Northstar Holistic Collective in Sacramento with her boyfriend, who is a daily pot smoker.

She said it felt surreal to be in a shop with options ranging from chocolate edibles to the green flower and said she was considering taking a toke now that it's not illicit.

"I come from the era where it was super illegal," Sposeto said.

At San Diego's Mankind Cooperative, lines were 40 minutes long and buyers from as far away as Iowa, Kansas and Canada waited with their California cannabis brethren to ogle offerings such as "Island Sweet Skunk" and a particularly potent strain called, "The Sheriff."

Outside KindPeoples dispensary in Santa Cruz, which tacked up the end of prohibition sign, people gathered in shorts and sweatshirts, winter coats and wool hats while waiting to get inside. A gray-bearded professor emeritus at the University of California, Santa Cruz, wearing a blue sport coat was the first customer.

In Orange County, shops in Santa Ana received the green light over the weekend to open and a steady flow showed up at ShowGrow.

She said she smoked pot until she had kids and fantasized in her teens about pot shops and "couldn't have dreamed of this place."

Her son said he hoped legalization would change the image people have of pot users.

"I work hard and I play hard," Bryce St. Peter said. "There shouldn't be this stigma of people being lazy stoners."

The mining giant concluded there was "no single root cause or error that directly resulted in the destruction of the rock shelters."
Sep 11th, 2020
Follow Us
Most Recent