The International Trade Commission split over the exact nature of the remedies but agreed that a surge in imported panels caused harm to U.S. manufacturers. 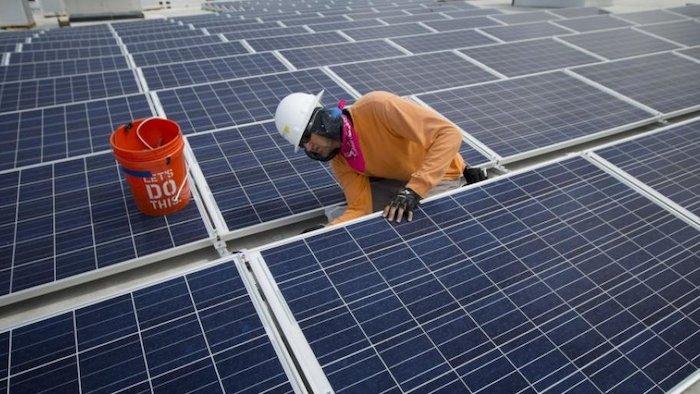 A U.S. trade commission recommended on Tuesday that the Trump administration impose tariffs or other restrictions to slow an influx of low-cost solar panels imported from China and other countries.

The four-member International Trade Commission split over the exact nature of the remedies but agreed that a surge in imported solar cells and panels has caused serious harm to U.S. manufacturers.

The panel's chairwoman, Rhonda Schmidtlein, recommended tariffs ranging from 10 percent to 35 percent on selected imports, while two other commissioners recommended 30 percent tariffs to be phased down over four years. A fourth commissioner recommended quotas on imports of solar products to the U.S.

The commission's non-binding recommendations follow a unanimous vote in September that the imports are harmful. President Donald Trump is expected to make a final decision by mid-January.

Georgia-based Suniva Inc. and Oregon-based SolarWorld Americas brought the trade case, saying the imports have pushed them to the brink of extinction. Suniva has declared bankruptcy, while SolarWorld had to lay off three-quarters of its workforce.

Cheap imports have led to a boom in the U.S. solar industry, where rooftop and other installations have risen tenfold since 2011.

The main trade group for the solar industry and many governors oppose tariffs, saying they could cause a sharp price hike that would lead to a dramatic drop in solar installations and cause massive layoffs in the solar industry.

Solar energy is "a proven job creator for electrical workers nationwide who install utility-scale and rooftop solar systems around the country," said John Grau, the group's CEO. "These are good, middle-class jobs that promote apprenticeship, community-based hiring and veterans. We urge President Trump to reject" tariffs or other restrictions.

The Solar Energy Industries Association, which represents nearly 9,000 U.S. solar companies, has said the United States should not be helping foreign-owned companies such as Suniva and SolarWorld.

Suniva's majority owner is based in China, while SolarWorld Americas is a subsidiary of German solar giant SolarWorld.

Trump has not cozied up to the solar industry, as he has for coal and other fossil fuels, but he is considered sympathetic to imposing tariffs on solar imports as part of his "America first" agenda.

Suniva declared bankruptcy this spring after laying off 190 employees and closing production sites in Georgia and Michigan. SolarWorld Americas, meanwhile, has trimmed its workforce from 1,300 to 300, with more cuts likely.

While the U.S. solar industry employs about 260,000 people, fewer than 2,000 are involved in making solar panels like those made by Suniva and SolarWorld. More than half of solar jobs are in installation, with about a quarter in sales, distribution and development.