Ryan's attack came as he defended the Republican tax proposal that would repeal the federal deduction for state and local taxes. 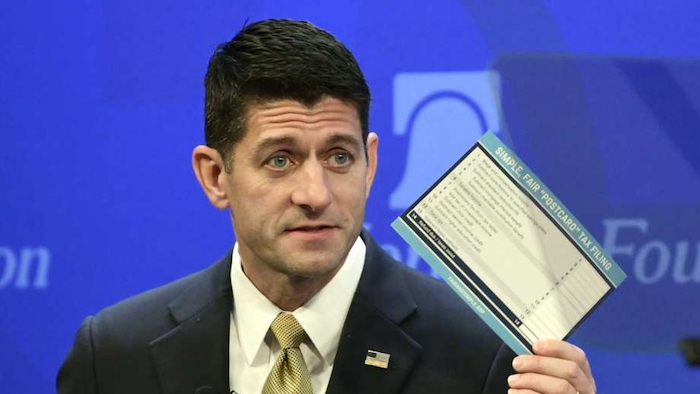 House Speaker Paul Ryan on Thursday lambasted high-tax states like California, New York and New Jersey, arguing the rest of the country is "propping up profligate, big-government states" even as they pay billions more in taxes than they receive in return from the federal government.

Ryan's attack came as he defended the Republican tax proposal that would repeal the federal deduction for state and local taxes, saying it has forced the rest of the country to support those states' high taxes and reckless spending.

House Republicans from those states are bucking President Donald Trump's tax overhaul package and GOP leadership over the popular tax deduction. The move to end the state-local deduction has angered GOP lawmakers and caused them to balk at supporting the nearly $6 trillion tax overhaul plan. The deduction is claimed by around 44 million people and costs the government an estimated $1.3 trillion in lost revenue over 10 years.

"States that got their act together are paying for states that didn't," Ryan said at an appearance at the conservative Heritage Foundation. He said the rest of the country is "propping up profligate, big-government states."

The three states send far more in taxes to Washington than they get back in federal spending, new data show. Divided by total state residents, New York gets back 81 cents for every $1 it pays in, New Jersey receives 74 cents and California, 96 cents, according to an analysis released last month by the Rockefeller Institute of Government.

New York contributed $48 billion more in taxes to the federal government than it received in government spending, the biggest deficit, the analysis found.

New Jersey gave $31 billion more in taxes than it got back and California $17 billion more, the data show. The figures were for the budget year ending Sept. 30, 2015.

Opposition to ending the deduction has brought forward an unusual alliance of the Republican lawmakers from high-tax states, state and local government officials, public employee labor unions and business groups like Realtors. Wary of the financial pinch their constituents and members could sustain from losing the deduction, they are pressing the Trump administration to reconsider.

"This is really almost like a life or death issue for districts like mine," says Republican Rep. Peter King, who represents a district on New York's Long Island. "This cannot be called a rich district. It serves a lot of middle-income people."

With Republicans splintered, the future of the $6 trillion tax overhaul plan is threatened by GOP defections, even as the success of the package is a political imperative for Republicans who have pinned their hopes on notching a big legislative achievement to help them retain control of Congress in next year's elections.

Rep. Chris Collins, R-N.Y., a Trump ally, warned Wednesday that states such as New York, New Jersey, California and Illinois would need some "accommodations" to go along with eliminating the deduction for state and local taxes paid, possibly a cap on how much could be deducted.

Completely scrapping the deduction "would impact too many middle-income people," Collins said.

Some Republicans and a coalition of groups opposed to the changes contend that repealing it would subject people to being taxed twice and would amount to a federal revenue grab on the backs of homeowners who pay property taxes. And governors like New York's Andrew Cuomo, a potential 2020 presidential candidate, have rallied against the change.

"There will be a transfer of wealth of over a trillion dollars to the federal coffers," said Matt Chase, executive director of the National Association of Counties.

Randi Weingarten, president of the American Federation of Teachers, said eliminating the deduction would not only "devastate funding for public schools, infrastructure, law enforcement and other vital services" but also boost taxes on the middle class. "For what? Tax cuts for the wealthy."

The White House has argued that the plan is focused on helping middle-class workers, arguing that lowering corporate rates will boost jobs while the tax cuts and simpler tax code will reduce their burden.

Administration officials contend the rest of the nation shouldn't have to subsidize states like California and New York that use the state and local tax deduction in large numbers.

But that argument has drawn a strong retort from the states.

"New Yorkers send over $50 billion more to the U.S. government than they receive back. So New Yorkers, and in particular Long Islanders, are subsidizing the rest of the country; not the other way around as you suggested," wrote Kevin Law, president and CEO of the Long Island Association, in a letter to Treasury Secretary Steve Mnuchin.

A possible compromise floated by the state-local defenders cracked open another fault line: Homeowners would be forced to choose between two popular deductions — one for local property taxes under the state-local deduction, the other for mortgage interest.

Taiwan turned to building its own subs after China successfully blocked purchases from abroad.
Nov 24th, 2020
Follow Us
Most Recent