Trump Promises Massive Tax Cut But The Poor Would Get Little

The poorest would get an average tax cut of about $60 a year, according to an analysis by the Tax Policy Center. 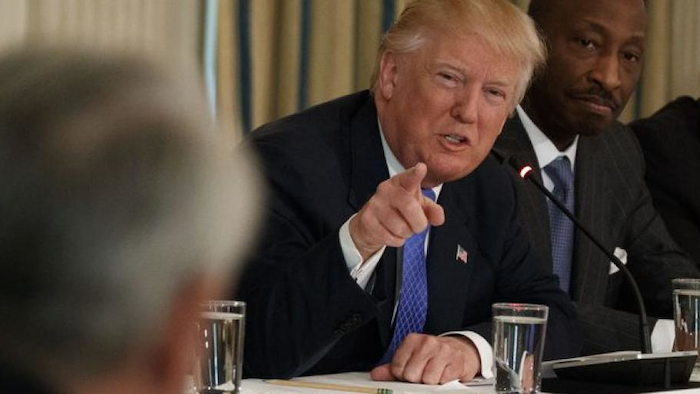 President Donald Trump promised Americans "the largest tax cut in our country's history." But for low-income households, Trump's plan would amount to crumbs.

The poorest would get an average tax cut of about $60 a year, according to an analysis by the Tax Policy Center. Middle-income families would get about $300 on average.

Republicans have backed a budget resolution that would enable Congress to pass a tax package that could add up to $1.5 trillion to the national debt over the next decade.

The Tax Policy Center's analysis says most of the tax cuts would go to the wealthiest Americans. For example, the top 1 percent — families making about $700,000 a year — would get an average tax cut of $129,000. Tax breaks targeting the wealthy include lowering the top income tax rate from 39.6 percent to 35 percent, eliminating the alternative minimum tax, and doing away with the federal estate tax, which is only paid by people who inherit multimillion-dollar estates.

Congressional Republicans dispute that their plan would ultimately help wealthy families more than it would help the middle class. They note that the plan unveiled by Trump and GOP leaders last week is incomplete. The plan would reduce the number of tax brackets from seven to three, but it doesn't include the income levels for each tax bracket.

The plan would also increase the $1,000 child tax credit, but it doesn't say by how much. Those details are still being worked on.

"There is simply no way for TPC or anyone to deliver these kinds of specific estimates with the information provided in the framework," said Sen. Orrin Hatch, R-Utah.

"To get their estimates, they filled in blanks with numbers from other proposals, added a pile of exceptionally pessimistic and biased economic assumptions, and came up with a tax plan that, for all intents and purposes, is their own," said Hatch, who chairs the Senate Finance Committee.

The Tax Policy Center says it filled in the blanks by taking numbers from a tax blueprint released by House Republicans. For example, the analysis assumes that the child tax credit would increase to $1,500.

Republican Sens. Marco Rubio of Florida and Mike Lee of Utah want to increase the child tax credit to $2,000. Rubio says doubling the credit is the best way to target tax relief for low- and middle-income families.

The main provisions that would affect low-income families are increasing the child tax credit and raising the standard deduction from $6,300 to $12,000. This would be partially offset by eliminating the $4,050 personal exemption.

Also, the lowest tax rate would increase from 10 percent to 12 percent, but the plan doesn't specify the income levels for each tax bracket.

In the Tax Policy Center's analysis, low-income families make less than $25,000 a year. That puts them in the bottom 20 percent of households.

An analysis by the conservative Tax Foundation noted the plan's lack of details. Nevertheless, it found only modest benefits for low-income families, increasing their annual incomes by an average of less than 1 percent.

The liberal Center for Budget and Policy Priorities argues that if adding to the national debt leads to spending cuts, low-income families could be worse off.

"By increasing deficits and debt, the tax cuts would intensify pressure, likely in the next several years, for steep budget cuts in programs that help low- and middle-income families," wrote Sharon Parrott, a senior fellow at the center. "Most low- and middle-income children and their families would likely lose more from these budget cuts than they would gain from the tax cuts."

One reason the poorest families wouldn't get much of a tax break is that many don't pay federal income taxes. About 44 percent of U.S. households pay no federal income tax, according to the Tax Policy Center. Most of these people pay other federal taxes, including payroll taxes.

However, when it comes to the income tax, most low-income families receive tax credits that are greater than the amount of taxes they owe. They receive the tax credits in the form of a tax refund, even though they paid no taxes.

Maag said this would not change under Trump's tax plan.