Republicans aren't usually big on raising taxes, but they're really eager to eliminate the federal deduction for state and local taxes. 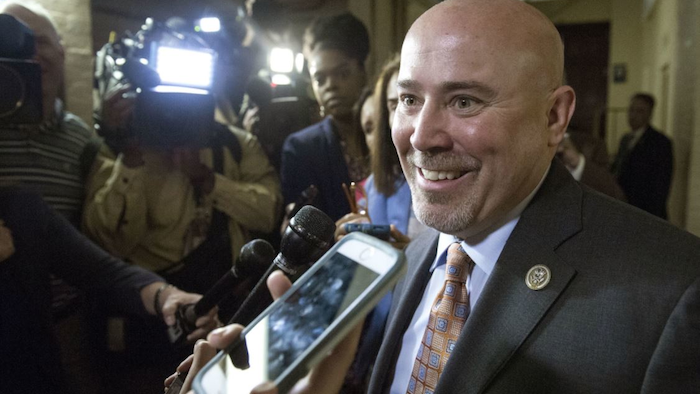 Republicans aren't usually big on raising taxes, but they're really eager to eliminate the federal deduction for state and local taxes.

Why? A look at the states that benefit the most from the tax break helps explain it — they are all Democratic strongholds, or so-called blue states. New York, Connecticut, New Jersey and California top the list of states where taxpayers get the biggest deductions. Not a single Republican-leaning state ranks in the top 10.

"Although Republicans usually recoil at any type of tax increase, cutting this tax break would almost be fun for them," said Martin Sullivan, chief economist for Tax Analysts. "It provides massively disproportionate deductions to high-tax states controlled by Democrats."

Proposals by House Republican leaders and President Donald Trump would repeal the tax break as part of their packages to overhaul the American tax code. But they are getting a lot of pushback from Republican lawmakers in Democratic-controlled states. 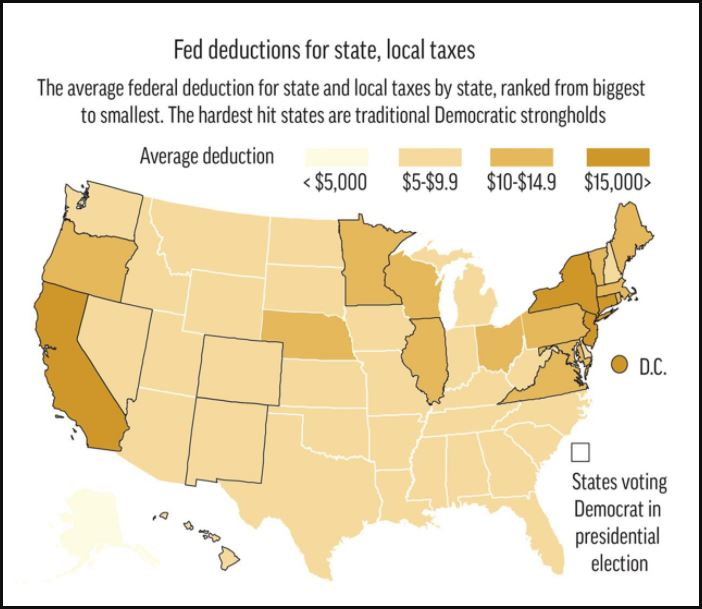 The standoff illustrates how hard it is for Congress to eliminate any popular tax break, even one that primarily benefits the ruling party's political opponents.

Almost 44 million people claimed the deduction in 2014, according to IRS statistics. That's nearly every taxpayer who itemizes deductions, a little less than 30 percent of all taxpayers. Sullivan analyzed which states would be hit hardest by repealing the tax deduction. The Associated Press did a similar analysis and came to the same conclusion.

These are states with high property values, high costs of living, high incomes and relatively high state and local taxes compared to other states. They are also states President Donald Trump lost in last year's election. Though the president is from New York, he lost the state to Democrat Hillary Clinton by 22 percentage points.

The highest-ranked state won by Trump is Wisconsin, which came in at No. 13, with an average deduction of $11,300.

At the bottom is Alaska, with an average deduction of $4,800. It is followed by Tennessee and Alabama. Among the bottom 10 states, Nevada and New Mexico are the only ones won by Clinton.

The deduction allows taxpayers to write off real estate taxes, and state and local income taxes. If your state doesn't have an income tax, you can deduct sales taxes. The deduction is heavily weighted to families with high incomes. Seventy-five percent of the benefits went to families making more than $100,000.

"We're proposing a much simpler code with lower rates where everyone gets help whether they are paying their state and local taxes or they are putting their kids in college," said Brady, who chairs the tax-writing House Ways and Means Committee.

Eliminating the tax break would raise $1.3 trillion over the next decade, according to the nonpartisan Tax Policy Center, money that could be used to help pay for lower income tax rates.

The House Republican plan would eliminate most itemized deductions while nearly doubling the standard deduction, to $24,000 for married couples. Notably, the plan would keep the deductions for mortgage interest and charitable contributions.

The White House and congressional Republicans have been privately negotiating their tax package for weeks, with no public sign that they're near a consensus. Democrats have been excluded from the talks.

Some Republicans claim the deduction for state and local taxes encourages states to spend and tax more because the taxes can be deducted at the federal level. Some also complain that the deduction forces low-tax Republican states — red states — to subsidize high taxes in Democratic states.

However, many blue-state Republicans don't buy those arguments. They note that most high-cost blue states send more tax dollars to Washington than they receive in federal benefits. And who benefits from those tax dollars? Low-cost red states where incomes are generally lower.

"If we're going to have a discussion about who is subsidizing whom, it must be across the board. It can't be just one provision," said Rep. Leonard Lance, R-N.J.

Lance is teaming up with Rep. Bill Pascrell, Jr., D-N.J., in an effort to maintain the tax break.

Rep. Tom MacArthur, R-N.J., said he brings up the deduction every time he sees Treasury Secretary Steven Mnuchin, one of Trump's top advisers on taxes.

"The minute he walked into the room and saw me he pointed and said, 'I know, state and local tax deduction,'" MacArthur said.

"I know the White House is committed to bringing taxes down for everybody," MacArthur said. "But people in high-tax states under the plan they're proposing would basically be at a break-even while everyone else in the county enjoys tax relief. That's not fair."