A warehouse owned by Ruihai exploded in August 2015 and killed 173 people. 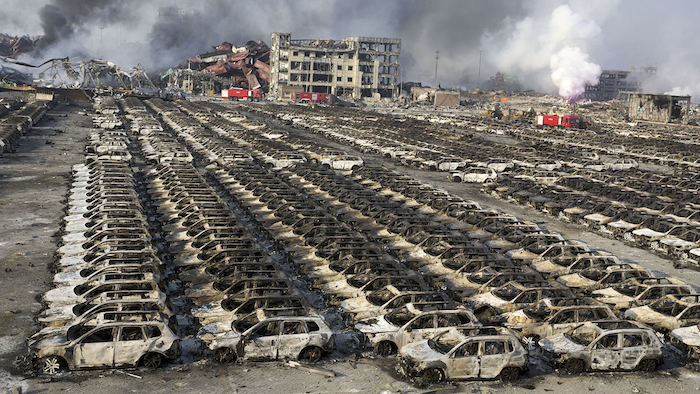 The head of a Chinese logistics company this week was given what's known as a "suspended death sentence" for his role in a massive 2015 explosion in Tianjin.

Yu Xuewei, the chairman of Ruihai International Logistics, apologized to victims and said that he would not appeal the decision; the Associated Press noted that those sentences are generally commuted to life in prison after two years.

A warehouse owned by Ruihai exploded in August 2015 and killed 173 people, including 99 firefighters and 11 police officers who were unaware of the facility's dangerous chemical stockpiles.

Nearly 800 others were injured — primarily due to the warehouse's illegally close proximity to nearby neighborhoods — and the chemicals compromised air, water and soil in the immediate area.

An investigation found that highly flammable nitrocellulose — used in medical applications and in lacquers — lost humidifying agents, dried out and began to burn in Tianjin's hot August weather.

The incident was one of China's deadliest industrial accidents in recent years and called attention to corruption by company and government officials.

The AP reported that courts sentenced 12 other Ruihai employees for their role in the disaster, along with 11 workers from a related company and 25 local government employees accused of taking bribes, dereliction of duty and abuse of power.

Yu, in particular, was found to have bribed officials in order to secure their permission to store nearly 50,000 tons of toxic chemicals at the warehouse.

"I want to use this opportunity to apologize to those who died and were hurt in the blasts and their families, as well as all the citizens of the nation," Yu told judges in a video shown by state television, according to the AP.