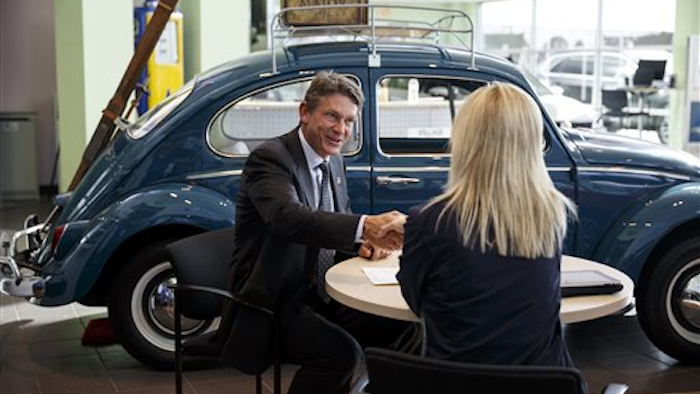 A legislative hearing called by a leading Volkswagen critic just days after news of a diesel emissions cheating scheme broke last month turned into more of a pep rally than a grilling in the city that is home to the German automaker's lone U.S. plant on Thursday.

A top Republican in the state House said he expects the scandal will turn out to be a "small bump in the road;" a former governor said critics were doing a disservice to more than 3,000 workers at the plant; and the state's economic development chief went to a nearby dealership to put a $5,000 deposit on a new SUV to be made at the factory next year.

Volkswagen earlier in the day announced an official decision to stick with its lone U.S. plant in Chattanooga — including production of the new midsized SUV next year — despite the uncertainty caused by its emissions scandal.

The Chattanooga meeting was presided over by Sen. Bo Watson, R-Chattanooga, a longtime critic of the company for not taking a harder line against the United Auto Workers' efforts to unionize the plant. But Watson opened the hearing by saying that labor issues were not the reason for the hearing, and the issue did not come up during the discussion.

"I'm kind of interested in what's happening in my hometown and home state," Watson said.

Christian Koch, the plant's president and CEO, said that diesels made up an average of between 20 percent and 25 percent of the midsized Passat sedans produced in Chattanooga before sales were halted following the revelations. The plant has made more than 500,000 Passats since it opened in 2011.

But Koch said that the focus of production has been shifted to a gasoline version so that the factory is "not missing one car of production" in the aftermath of the scandal.

Koch said that the schedule of production of a new SUV at the plant remains on track. He told lawmakers that equipment is being installed for the production of a successor of the Passat which could be hybrid or electric vehicles.

Former Gov. Phil Bredesen, who played a key role in persuading Volkswagen to choose the Chattanooga site in 2008, attended a ceremony near the plant to name an interstate exchange after him and former Hamilton County Mayor Claude Ramsey.

Bredesen told reporters afterward that he was put off by critics of the automaker following the scandal.

"When Volkswagen started having their problems, I started to hear some people jawing a little bit about things," Bredesen said. "I'm just trying to say you don't do that with your partners."

"There's some people who screwed up, there's no question about it," he said. "It's not the people across the street over here."

Mike Cantrell, the president of United Auto Workers Local 42 in Chattanooga, also welcomed Volkswagen's confirming its commitment to the plant.

"We believe Volkswagen will fully recover from the emissions scandal and, as a result, will emerge as a stronger company," he said in an email. "We look forward to supporting the VW comeback story."

"In historical context, this is a small bump in the road for a company like Volkswagen," he said. "I think six months or a year from now people are going to look back at this and it's just going to be an afterthought."

"We're looking forward to those days," he said.

After the hearing, state Economic and Community Development Commissioner Randy Boyd traveled to a nearby Volkswagen dealership to sign papers to acquire one of the new SUVs scheduled to hit the market in early 2017.

"I'm putting my own money down knowing that I'm going to get a great car," Boyd said.