The Senate voted 64-29 to add legislation reviving the bank to a sweeping highway bill. 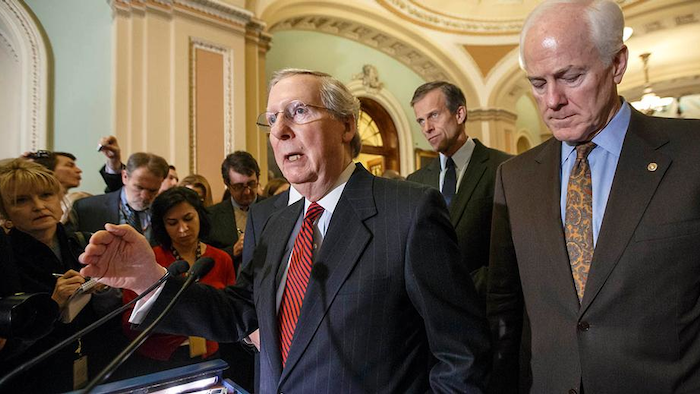 The federal Export-Import Bank expired June 30 when Congress failed to renew its charter. The bank is a small federal agency that helps U.S. companies sell their products overseas, by underwriting loans to foreign customers. Conservatives oppose it as corporate welfare and are pushing to keep it dead. But late Monday the Senate voted 64-29 to add legislation reviving the bank to a sweeping highway bill being considered on the floor.

Five things to know about the Export-Import Bank and its future:

Despite the Senate's action on a measure to revive the bank and extend it through 2019, its future is far from assured. The House announced plans Tuesday to pass a three-month highway extension that does not include an Export-Import Bank provision — and then adjourn for the summer. The Senate will likely be forced to adopt the House bill or watch transit programs lapse. That means the bank will stay shuttered at least into the fall, when Congress returns from its annual August recess.

Even though the bank's charter expired at the end of June, it remains in business to service more than $100 billion in outstanding loans and guarantees. The agency itself is funded, including employee salaries, through Sept. 30.

Debate About The Bank's Role

Conservatives say the Export-Import Bank amounts to corporate welfare, pointing out that the companies that benefit include major corporations like Boeing, Caterpillar and GE which they say can support themselves without taxpayers' help.

But supporters of the bank, including groups like the Chamber of Commerce and National Association of Manufacturers, point out that most other countries have export credit agencies, in some cases more generous than the U.S. version. Supporters say it will be harder for U.S. companies to compete overseas if their competitors are supported by the government and they aren't.

The bank says that last year it authorized $20 billion worth of transactions which supported $27.5 billion of U.S. exports and 164,000 U.S. jobs. And it says it has a default rate of less than 1 percent.

Opponents argue that the bank mostly helps big businesses. Of the $20.5 billion in financing and insurance authorized by the bank in 2014, just over $5 billion of that was for small business exporters, according to bank officials. But if the transactions themselves are counted up, more small businesses are helped than big ones. It's just that the amounts spent on them are smaller.

In past years the bank was renewed with little or no controversy and sometimes without so much as a roll-call vote. But after a tea party-infused GOP majority retook the House in 2010, conservatives began seizing on the bank as crony capitalism and a federal agency ripe for elimination, making a 2012 reauthorization vote a struggle for the first time.

Outside groups like Club for Growth and Heritage Action for America made it an issue, and this year, with Republicans in control of the Senate and a presidential campaign underway, conservatives have targeted the Export-Import Bank even more assertively.

Adding to the pressure, the billionaire GOP Koch Brothers took on the cause through their allied organizations Americans for Prosperity and Freedom Partners, pressuring GOP presidential candidates who are jockeying for the Kochs' coveted financial backing to toe the line.

The issue provoked extraordinary GOP infighting in the Senate in recent days as presidential candidate Sen. Ted Cruz, R-Texas, accused Majority Leader Mitch McConnell, R-Ky., of lying to him about whether there was a deal to revive the bank. McConnell disputed the accusation.

The bank was created by Franklin Delano Roosevelt in 1934, during the Great Depression. His aim was to help the U.S. "re-engage economically with the rest of the world," according to the State Department historian. The bank was initially established to help trade with the Soviet Union, and a second version was meant to boost trade with Cuba, but the two entities were soon merged and began extending efforts around the globe.