Mayors from GOP-dominated states are calling on cities to use nature to fight the impacts of climate change, even while Republican governors and lawmakers repeatedly question the science that shows human-caused pollution contributes to global warming. 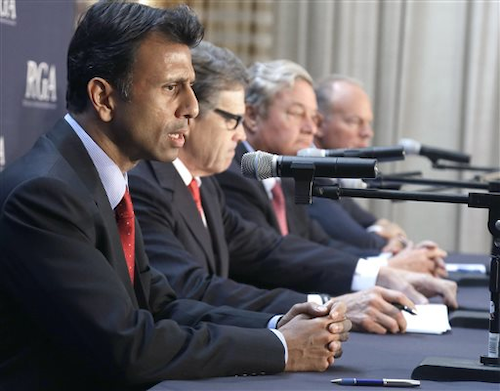 HOUSTON (AP) -- Mayors from the GOP-dominated states of Texas and Arizona are calling on cities to use nature to fight the impacts of climate change, even while Republican governors and lawmakers repeatedly question the science that shows human-caused pollution contributes to global warming.

As conservative governors criticize the U.S. Environmental Protection Agency's new rules designed to cut greenhouse gas emissions from power plants, the mayors — many from cities already struggling with climate-change effects — are taking steps and spending money to stem the damage.

Attendees of the U.S. Conference of Mayors will vote Monday on a resolution that encourages cities to use natural solutions to "protect freshwater supplies, defend the nation's coastlines, maintain a healthy tree cover and protect air quality," sometimes by partnering with nonprofit organizations.

Since the conference is almost evenly divided between Republicans and Democrats, and the resolution only "encourages" steps rather than mandating action, Leffingwell believes it will easily be approved Monday since it quickly passed through the committee on Friday.

"The best strategy is not to get involved in partisan politics," said Leffingwell, who noted that Texas Gov. Rick Perry may be a climate-change skeptic, but he still supported the state's move to invest $2 billion in water infrastructure after a debilitating drought in 2011.

"He doesn't have to acknowledge climate change to know that the facts are there. ... We want to take the steps that would advance the things that we all believe in without getting into some ideological argument," Leffingwell added.

EPA Administrator Gina McCarthy told an audience of mayors on Sunday that they could turn the debate on climate change into a discussion about economics, public safety and health rather than strictly politics. Local action could also serve as an example to skeptical lawmakers at the state level, she argued.

"You have shown them what leadership on this issue can bring," McCarthy said.

For coastal cities such as Galveston, Houston and New York City, as well as more arid regions of the country, such as Phoenix and Sacramento, California, there is no time for debate — climate change's effects are real.

Galveston's seawall didn't stand up to Hurricane Ike in 2008, partly because of the sea level rise that allowed the storm's surge to reach inner areas. Officials began to rethink protections, leading Galveston and nearby coastal communities to collaborate with The Nature Conservancy to restore oyster reefs and wetland habitats that could better help protect communities.

New York learned similar lessons after Superstorm Sandy. Quickly after, it became clear some man-made solutions — such as seawalls or underwater fencing — are expensive and not always effective. The city also asked the Nature Conservancy to study how built defenses could be combined with "natural infrastructure" to buffer a city that's becoming more vulnerable.

Howard Beach, a low-lying, flat area of Queens, was pounded by Sandy. The Nature Conservancy's report concluded that significant, cost-efficient defenses could be achieved by re-vegetating shorelines and restoring mussel beds and wetlands in combination with more traditional solutions, such as sea walls.

Heat and debilitating drought is worsening in some parts of Arizona and California. Sacramento is using trees for part of the solution, and the city has outlined a detailed "climate plan" for the coming decades.

Bill Finch, the mayor of Bridgeport, Connecticut, and co-chair of the conference's climate task force, said some mayors in mid- and large-sized cities have had a climate plan for about seven years. Party politics are irrelevant, he said, pointing out that his co-chair on the committee is Carmel, Indiana, Republican James Brainard.

Carmel put roundabouts at 84 intersections. Studies have shown such traffic patterns can cut down on emissions. Now, Finch plans to implement a similar plan in his community.

"Mayors have to go to the grocery store and listen to families complain about kids with asthma ... that their flooding is getting worse," Finch said, pointing out that the steps in the resolution would also give cities more parks and green space.

"This is not a cause for mayors. This is a pragmatic problem that requires pragmatic solutions," Finch said.