Sales of a treated ground beef product that critics derisively dubbed "pink slime" have rebounded, according to two of its manufacturers. 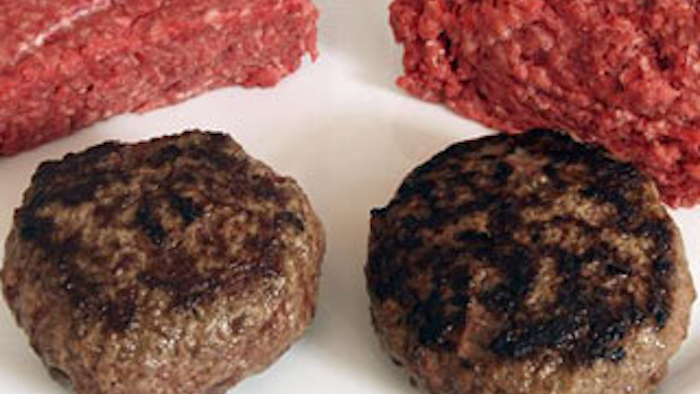 LINCOLN, Neb. (AP) -- Sales of a treated ground beef product that critics derisively dubbed "pink slime" have rebounded, according to two of its manufacturers.

Spokesmen for Cargill and Beef Products Inc. confirmed that sales of the product, which the industry refers to as "lean, finely textured beef," have risen. But Cargill told the Lincoln Journal Star (http://bit.ly/1ju6LS1 ) that sales haven't rebounded to the level they were before a 2012 controversy about the meat.

The product, which is added as a low-cost ingredient to ground beef, is made from fatty bits of meat left over from other cuts. The bits are heated to about 100 F and spun to remove most of the fat. The lean mix then is compressed into blocks for use in ground meat. The product also is exposed to ammonium hydroxide gas or citric acid to kill bacteria, such as E. coli and salmonella.

The phrase "pink slime," coined by a federal microbiologist, has appeared in the media at least since a critical 2009 New York Times report.

BPI sued ABC News and others in September 2012, alleging the network's reporting about the product earlier that year damaged BPI by misleading consumers into believing it was unhealthy and unsafe. BPI said the sales drop forced it to close plants in Waterloo, Iowa; Garden City, Kansas; and Amarillo, Texas; laying off more than 700 workers. Only a Nebraska plant in South Sioux City remained open.

Attorneys for ABC have said the network in each of its broadcasts stated the U.S. Department of Agriculture deemed the product safe to eat. They argued that although the term "pink slime" may come across as unappetizing, it is not incorrect. Lean, finely textured beef is both pink and, like all ground beef, has a slimy texture, they argued.

The South Dakota Supreme Court ruled last month that BPI's lawsuit against ABC News can go to trial. Union County Judge Cheryle Gering has already ruled that ABC isn't protected against liability by saying that the product is beef and is safe.

Jeremy Jacobsen, a spokesman for Dakota Dunes, South Dakota-based BPI, said he could "confirm we are seeing an increase in sales." But he would not comment further, saying the company's attorneys have advised BPI not to discuss the issue in any detail because of its $1.2 billion lawsuit against ABC News.

Cargill also lost sales and shut down a plant in Plainview, Texas, that employed more than 2,000 people. Cargill spokesman Mike Martin told the Journal Star that his company now sells the product to about 400 customers, which is more than before March 2012, but the sales volume remains down about 40 percent.

Since Jan. 20, Cargill has said, all of Cargill's U.S.-produced, fresh, 100 percent ground beef products that contain the finely textured beef will say so on a label, whether sold in bulk or in chubs directly to consumers.

Cargill also has developed a website to answer questions about the product. It says, for example, that Cargill makes ground beef that ranges from 73 percent lean to 96 percent lean. Cargill says it the finely textured beef is mixed in to help reach the right percentage for each product.