A group of eight current and former employees of United Parcel Service in Kentucky have sued the company saying they faced racial discrimination, poor treatment based on race and retaliation after they complained. 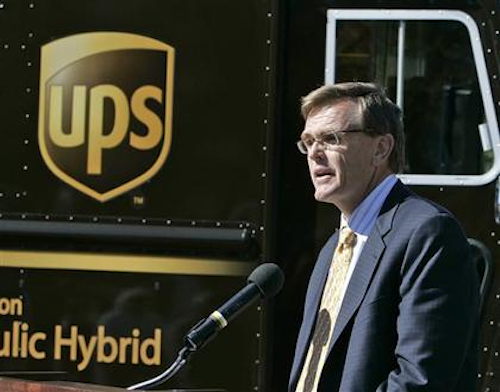 LOUISVILLE, Ky. (AP) -- A group of eight current and former employees of United Parcel Service in Kentucky have sued the company saying they faced racial discrimination, poor treatment based on race and retaliation after they complained.

The men also contend an effigy of a black UPS employee hung from the ceiling outside the manager's office for four days.

The suit, filed Friday in Fayette County Circuit Court in Lexington, names three managers and the company as defendants.

The men say they were punished more severely than white employees for "alleged workplace infractions." Two of the employees were fired; two others resigned, which the lawsuit says constitutes "constructive discharge."

The men are seeking unspecified damages from Atlanta-based UPS, which has a freight service center in central Kentucky.

Luke Morgan, the attorney for the men, said his clients tried to work out the issues with UPS, but the company "has given them the runaround."

"You can't make any sense of this," Morgan said.

Susan Rosenberg, a spokeswoman for UPS, said the company disagrees with the allegations in the lawsuit and that all complaints were investigated.

"We took it seriously," Rosenberg said.

Morgan said racially-based issues first popped up in the summer of 2008, when Barack Obama began his general election campaign for the presidency and resurfaced during his re-election campaign four years later. The lawsuit says that on Aug. 9, 2012, one of the managers made a dummy in a UPS uniform with a dark brown toboggan as a head and it hung from the ceiling until Aug. 13, 2012.

The dummy's hands and one foot were tied to a ladder to demonstrate the "three points of contact" that employees should have when using a ladder. Twine was tied around the dummy's neck and to the ceiling to "prevent the dummy from falling forward," the lawsuit says UPS claimed.

Rosenberg said the dummy in question was part of safety training for drivers and not intended to offend anyone.

"We believe this was never intended to be offensive or discriminatory," Rosenberg said.

Later, the ladder was moved and the dummy hung from the ceiling with a handwritten note that read, "no hangings please."

"There were a lot of upset people, rightly so," Morgan said.

Complaints to the human resources department resulted in managers retaliating against them by doing "ride alongs" with the men on their delivery route "as a subtle means to intimidate and punish the plaintiffs for raising these issues," the men said in the lawsuit.