Senior Turkish officials denied allegations of lax government oversight and a Turkish mining company defended its safety record Friday, four days after at least 284 people died in an underground blaze at a coal mine in western Turkey. 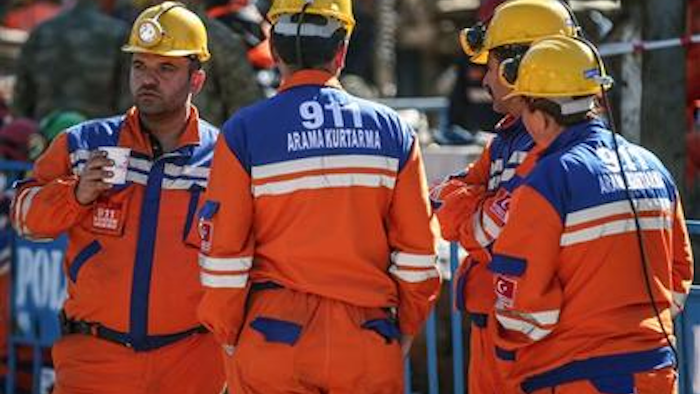 SOMA, Turkey (AP) -- Senior Turkish officials denied allegations of lax government oversight and a Turkish mining company defended its safety record Friday, four days after at least 284 people died in an underground blaze at a coal mine in western Turkey.

A maximum of 18 miners remain missing and the final death toll will be around 300, the country's energy minister said. Until now it had been feared that there might be more than 100 victims still in the mine.

The mining company's owner, Alp Gurkan, said he had spent his own money on improving standards at the mine at Soma in western Turkey.

"I am hurting inside," he said at a news conference of company officials.

Turkey's worst mining disaster has set off a raft of protests amid public outrage at allegedly poor safety conditions at Turkish coal mines, widespread corruption and what some perceived as government indifference. "It's not an accident, it's murder," read a banner waved by trade unionists who marched through the streets of Istanbul on Thursday.

The public anger has stirred up new hostility toward Prime Minister Recep Tayyip Erdogan's government, which was already sharply criticized for last summer's brutal response to protesters in Istanbul's Taksim square and its crackdown earlier this year on social media.

Responding to the outcry, Energy Minister Taner Yildiz said Friday that anyone found to have been negligent about safety at the mine can expect punishment.

"If they are at fault, no tolerance will be shown regardless of whether they are from the public or private sector," he said.

"We have no inspection and supervision problem," he said. "This mine was inspected vigorously 11 times since 2009."

Celik urged people to move on from the disaster. "Let's learn from this pain and rectify our mistakes. The private sector and the public sector will draw lessons," he said. "This is not the time to look for a scapegoat."

The chief prosecutor in the nearby city of Akhisar said prosecutors assigned to the case had begun interviewing some of the injured miners and other witnesses.

The mining company said the exact cause of the accident is still not known but denied any wrongdoing.

"There is no negligence," said Soma mine engineer Akin Celik. "I have been doing this job for 20 years but I have never seen anything like this. We would not want harm to come to a single fingernail of our workers."

Ramazan Dogru, the mine's general manager, rejected initial reports that the fire was caused by an explosion at a power distribution unit.

"It was caused by an undetermined spark,"Dogru said. "We believe that the fire grew because there was an entry of clean air there."

The mine officials said the mine had one safe room which was later made obsolete. The company was making preparations to build a second one when the accident occurred. Gurkan said that according to Turkish mining laws, however, safe rooms are not a legal requirement.

Turkey's Labor and Social Security Ministry says the mine's most recent inspection was in March, when no safety violations were detected. But the country's opposition party said Erdogan's ruling party had voted down a proposal to hold a parliamentary inquiry into several smaller accidents at mines around Soma.

The energy minister's comments suggested that no one else was expected to come out alive from the mine, where 284 miners are confirmed dead, mostly from carbon monoxide poisoning.

"We believe that there are no more than 18 worker brothers inside the mine," Yildiz told reporters. He said that number is based on reports from families and data provided by the company.

"We have 284 losses, 18 brothers inside and 77 million people hurting," Yildiz said, giving the last figure in reference to Turkey's population.

Yildiz said a fire is still burning inside the mine, spreading noxious fumes, but that "it is declining."

Grieving relatives laid their dead to rest in mass burials Thursday, with photos of their loved ones pinned to their chests and chanting the names of lost miners. More funerals were planned for Friday.