The U.N.'s expert panel on climate change is preparing a new report this weekend outlining the cuts in greenhouse gases, mainly CO2 from the burning of fossil fuels, required in coming decades to keep global warming in check. 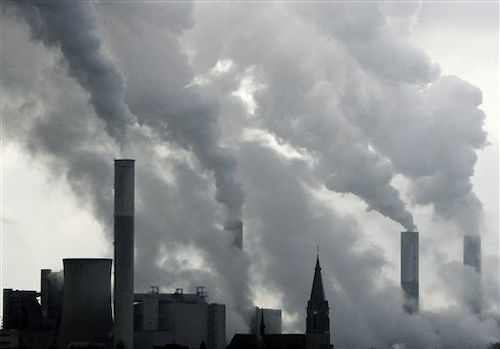 BERLIN (AP) -- The U.N.'s expert panel on climate change is preparing a new report this weekend outlining the cuts in greenhouse gases, mainly CO2 from the burning of fossil fuels, required in coming decades to keep global warming in check.

Since it's a scientific body, the Intergovernmental Panel on Climate Change won't tell governments how to divide those emissions cuts — a crunch issue in negotiations on a new climate pact that's supposed to be adopted next year.

However, in leaked draft of the report obtained by The Associated Press, the IPCC shows with graphs and tables which countries are responsible for the greatest share of emissions, using a range of different accounting methods. These are some of the key facts on emissions:

At the time of the IPCC's previous climate assessment, in 2007, the U.S. was the world's top carbon polluter. It has since been overtaken by China, which now accounts for one-quarter of global emissions because of its rapidly expanding economy. The U.S. is No. 2 with 17 percent, followed by India (6.6 percent), Russia (5.1 percent) and Japan (3.7 percent).

If you count back to when the Industrial Revolution started in the 18th century, the U.S. is the undisputed No. 1, accounting for nearly 28 percent of the world's cumulative emissions from energy and industry. China's share is 9.9 percent, Russia's 6.9 percent, Britain's 5.9 percent and Germany's 5.6 percent. Western countries rank high because they have been burning coal and oil for much longer than the rest of the world.

Putting emissions in proportion to population size also puts Western countries — and oil and gas-rich Gulf states — at the top of the table. In per capita emissions, Australians, Canadians and Americans exceed 20 tons of carbon per year — more than twice as much as the Chinese. "Overall, per-capita emissions in the highly industrialized countries ... remain, on average, about five times higher than those of the lowest income countries," the draft report says.

The main way of counting emissions is by looking at where they are released. But some say you get a better picture of what's driving emissions by looking at consumption patterns. As the IPCC puts it: "A ton of steel produced in China but exported to the United States results in emissions in China when the fundamental demand for the steel originated in the U.S." Accounting for emissions based on where a product is consumed rather than where it's manufactured still puts China at the top, but with a narrower gap to the U.S. China accounts for 21.9 percent of global consumption emissions, while the U.S. accounts for 18.1 percent.

Energy production is the biggest source of emissions, representing about one-third of the world total. Of the fossil fuels, coal generates the highest emissions, followed by oil and then natural gas. Agriculture, forestry and other land use accounts for 24 percent of total emissions. Other big sectors include transport (13 percent) and buildings (7 percent).

The IPPC gives a range of trajectories for global emissions, but doesn't break them down by country. However, it notes that nearly all growth in emissions is expected to occur in developing countries, as their populations grow and they try to catch up economically with the industrialized world. Developing countries say that's why they shouldn't have to face as strict emissions targets in a new treaty as industrialized nations. The latter say at least the biggest developing nations, including China, India and Brazil, must also make significant cuts. Both sides will likely point to selected statistics and projections in the IPCC report.