Obama signed a presidential memorandum on Thursday directing the Labor Department to devise new overtime rules "to ensure that workers are paid fairly for a hard day's work." 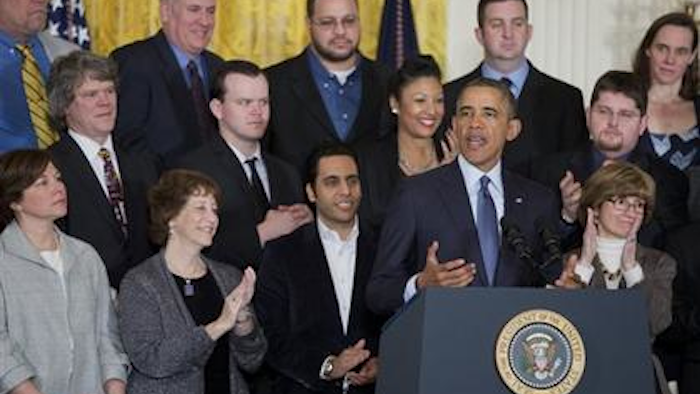 WASHINGTON (AP) — President Barack Obama's move to make more workers eligible for time-and-a-half overtime pay is being hailed by Democrats who see it as a potent midterm election issue and condemned by Republicans and business leaders as presidential overreach. Supporters say it will help the still fragile economy, critics say it will damage it further.

It is likely to affect millions of American workers.

"From my perspective, they have to be pulling numbers out of the air right now," said Washington labor lawyer Tammy McCutchen, referring to the conflicting claims by partisans that it would either help or hurt the economy. "We don't even know what the policy is going to be."

She's closer to the process than most. As administrator of the Labor Department's Wage and Hour Division during the George W. Bush administration, McCutchen oversaw the last rewrite of the program in 2004.

Currently, salaried workers making more than $455 a week, or $23,660 a year, aren't eligible for time-and-a-half overtime if some of their work is considered supervisory, even though many spend most of their day doing manual, clerical or technical work with few management duties.

Obama signed a presidential memorandum on Thursday directing the Labor Department to devise new overtime rules "to ensure that workers are paid fairly for a hard day's work." He's tossing out most of the rules McCutchen wrote in the process.

She called the rules "my babies. I spent two years of my life working on them. It's personal for me. It's going to be very sad to see them taking out a lot of the stuff I put in," she said.

But she also warned that the Obama administration should expect a rocky road ahead in implementing whatever new policy emerges — just as the Bush administration faced last time around.

Those close to the process suggest it will take 12 months to 18 months for the agency to complete its new assignment.

The move clearly has angered business groups and congressional Republicans, but it fits in with the overall Democratic midterm election game plan of focusing on income inequality and the middle class at the same time the stock market has soared.

"This will help to build an economy that honors work, not one that steals from workers," AFL-CIO President Richard Trumka said. "While workers are denied overtime pay that they have earned, compounding flat and falling wages, the bonus pool for Wall Street grew from $1.9 billion in 1985 to $26.7 billion in 2013 — an average annual increase of 14 percent in nominal terms."

Business and conservative groups argue that Obama's order will have the opposite effect of what is intended and could lead businesses to reduce the number of employees or cut pay, resulting in a drag on national economic growth.

"The federal government, in particular, shouldn't be involved in labor markets in any way, shape or form," said Jeffrey Miron, director of economic studies at the Cato Institute, a libertarian think tank, and a Harvard University economics professor. "It shouldn't be setting hours legislation and it shouldn't be providing union protection."

The order was the latest in a series of executive actions Obama has taken in an end run around congressional Republicans, who have blocked many of his proposals. With Congress blocking his attempt to raise the federal minimum wage from $7.25 to $10.10 an hour, he used his executive powers to raise it to that level for government contractors.

Thursday's presidential memorandum is aimed at workers who make more than the federal minimum but are ineligible for overtime pay under present law because they are designated as management, even when they have little or no supervisory responsibilities.

"If you're making $23,000, typically you're not high in management," Obama said in unveiling the initiative.

The White House contends the 2004 revisions to the 1938 Fair Labor Standards Act are outdated and allow employers to exempt too many workers from overtime pay.

Despite the contrary claims of Democrats and Republicans as to the economic impact of Obama's move, economists suggest any such impact will be minimal.

"Be a boom to employment among lawyers, but otherwise not a big deal," said Mark Zandi, chief economist at Moody's Analytics.