Are E-Cigarettes Just Smoke And Mirrors?

While e-liquids and vaping supplies lack oversight and long-term research, they are readily available to all ages online, and at gas stations, bodegas and many drug stores. 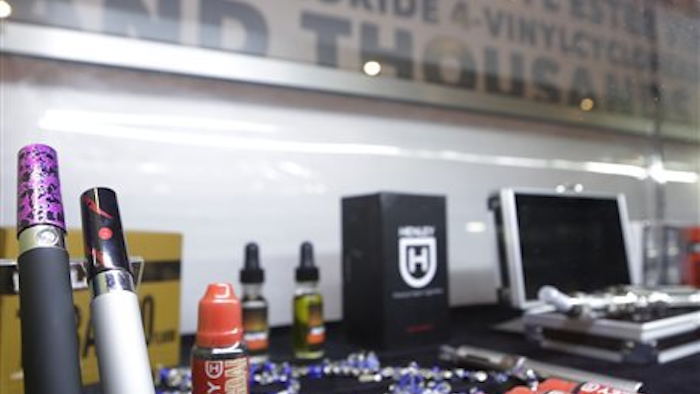 NEW YORK (AP) -- On the edge of the SoHo neighborhood downtown, The Henley Vaporium is an intimate hipster hangout with overstuffed chairs, exposed brick, friendly counter help — but no

Instead, the proprietors are peddling e-cigarettes, along with bottles of liquid nicotine ready to be plucked from behind a wooden bar and turned into flavorful vapor for a lung hit with a kick that is intended to simulate traditional smoking. A hint of banana nut bread e-juice lingered in the air one recent afternoon as patrons gathered around a low table to chat and vape, or sidled up to the inviting bar for help from a knowledgeable "vapologist."

Places like The Henley are a rarity, even in New York. But "vaping," itself, has had astonishing growth — in just eight years or so, the number of enthusiasts around the world has grown from a few thousand to millions. Believed by some to be the invention of a Chinese pharmacist, vaping now has its own YouTube gurus, trade associations, lobbyists, online forums and vapefests for meet-ups centered on what enthusiasts consider a safer alternative to the "analog," their name for tobacco cigarettes.

The Food and Drug Administration plans to regulate e-cigarettes but has not yet issued proposed rules. Right now, the agency simply states on its website that "e-cigarettes have not been fully studied so consumers currently don't know the potential risks of e-cigarettes," including how much nicotine or other chemicals are inhaled, or if e-cigs "may lead young people to try ... conventional cigarettes."

Whether vaping helps regular smokers quit or leads non-smokers to nicotine addiction isn't known. Vaping may be safer — there are differing opinions — but it isn't necessarily cheap.

Will Hopkins, a 21-year-old dog walker in black leather jacket and skull ring, visits Henley four or five times a week. He smoked a pack of full-strength Marlboros a day for eight years, until he took up vaping. The same goes for his buddy, 20-year-old photographer Will Gallagher, who has been vaping for two years and is fond of his brass mod, a cylindrical device that's larger than a cigarette and decorated with a tiger and Chinese lettering.

"I think both of us have poured in probably a little over a thousand" dollars, Gallagher said of their equipment. "I like the exclusivity of vaping. I like to keep changing up my stuff."

The Wills are into rebuilding tanks and rewiring coils, scouting new e-liquid flavors and adjusting their devices, which can cost up to $300 at Henley, to allow for more vapor, more flavor. But the co-owners of Henley count older smokers among their clientele as well.

E-cigarettes are usually made of metal parts combined with plastic or glass and come in a variety of shapes and sizes. They heat the liquid nicotine solution, creating vapor that quickly dissipates when exhaled. The vapor looks like tobacco smoke and can feel like tobacco smoke when taken into the lungs at varying strengths, from no nicotine up to 24 milligrams or more.

In 2006, sellers of all things vape worked primarily online or via kiosks in shopping malls. Now there are more than 250 brands and devices that can cost mere dollars for a case of "cigalikes," which resemble the real thing, to a gold-and-diamond unit the size of a fountain pen that was reportedly made for a Russian oil tycoon and cost about $900,000.

Whether vaping is cheaper than a cigarette habit is up to how much is spent on equipment and liquids and how often one vapes. A 15-milliliter bottle of liquid at Henley can go for $12 and may be roughly the equivalent of four packs of cigarettes, depending on the strength of both liquid and leaf cigarette, among other factors like how many puffs a smoker takes in. Rechargeable devices require batteries — another expense — and a starter kit for reuse that comes with a device can run around $66.

By comparison, the cost of a 20-cigarette pack of regular cigarettes can range from about $5 to about $15, depending on state tax and the type of location where they're purchased.

Some cities and states have already moved to ban public use the way they do tobacco, and some states forbid the sale of e-cigarettes to minors. Critics believe e-cigs may serve as a tobacco gateway for uninitiated young people. "It may be smoking e-cigarettes, but it's still smoking," said U.S. Sen. Richard Blumenthal, a Connecticut Democrat who was one of four senators to fire off a scathing letter to NBC and the Hollywood Foreign Press Association after a spoof on e-cigs aired during the Golden Globes in January.

Proponents argue that vaping isn't only safe but is helping people quit smoking. The Henley has a white "wall of doom," where it lists in big black letters the numerous tars and chemicals found in tobacco cigarettes, but absent in e-cig use if one is careful about the liquids purchased.

"What's so beautiful about this product is we can take people from a high level of nicotine down to zero, down to nothing, so they're just vaping basically water and flavoring," said Henley co-owner Talia Eisenberg.

She scoffs at the notion that child-friendly flavors of e-liquids — Watermelon Wave and Frozen Lime Drop, for instance — were created to lure teens. And she rejects the idea that e-cig companies should be banned from advertising on TV, as tobacco companies were more than 40 years ago.

While e-liquids and vaping supplies lack oversight and long-term research, they are readily available to all ages online, and at gas stations, bodegas and many drug stores. But Henley doesn't serve those under 18 — a voluntary decision. Would it make more sense to help people give up nicotine — an addictive substance — altogether?

"Sure, but how's that workin' for the country so far? How are they doin' with that? We're talking in terms of serious harm reduction," said Eisenberg's business partner, Peter Denholtz. His mother died of lung cancer two years ago; he himself smoked cigarettes for 36 years, but has been vaping for four years.

Some vapers, like Hopkins and Gallagher, find fun in tinkering with the paraphernalia. Denholtz likens them to older DIY enthusiasts who once whiled away their time on Heathkits, those all-inclusive boxes of parts that could be turned into TV receivers, amateur radios or stereo speakers.

"There's a whole subculture coming up. They're very into all of the different devices. They rewire and rebuild and use different materials for drawing up the juice. It's unbelievable what they've turned it into," he said.

Denholtz and others said vaping, to many, is merely a less harmful activity than tobacco smoking that duplicates the most pleasurable aspects and offers a communal feel like hookah use and cigar bars.

Xavier Armand, 25, has been vaping for a little more than three years and owns an advertising and marketing firm that is helping Henley put together a "liquid of the month club," along the lines of mail-order fruit of the month.

"I always kind of knew smoking was bad for me. My mom was a smoker, but I was never going to look into the patch or the gum or anything," Armand said. "At the end of the day, the best part about smoking is the smoke part. And that oral fixation is kind of a big thing as well. I consider my agency the 2014 version of 'Mad Men.' We all sit around there and instead of smoking cigarettes everyone is smoking e-cigs."

Much as movie stars made tobacco smoking seem glamorous in the 1930s and '40s, celebrities have helped fuel interest in vaping.

At the Golden Globes, Leonardo DiCaprio was shown vaping away in the audience. The actor told The Associated Press recently he vapes to "relieve the stress of life."

Other celebrities have signed on as paid e-cig endorsers, including co-host of "The View," Jenny McCarthy, and actor Stephen Dorff, both of whom push Blu, a big player in e-cigs that was recently bought by Big Tobacco's Lorillard.

Dorff, who took up smoking 20 years ago, stuck to Blu's talking points in a recent interview. He described how vaping offers him the freedom to smoke where regular cigarettes are frowned upon.

But wouldn't his loved ones like to see him quit nicotine for good?

"Ah, probably yeah," laughed Dorff, "but there's a lot of bad things in the world, you know. The one thing that I've always enjoyed is smoking. I consider myself a smoker."