Residents Frustrated By Lack Of Details On Nuke Dump

Energy department officials said there's no intent to hide anything and that some information is simply not known. 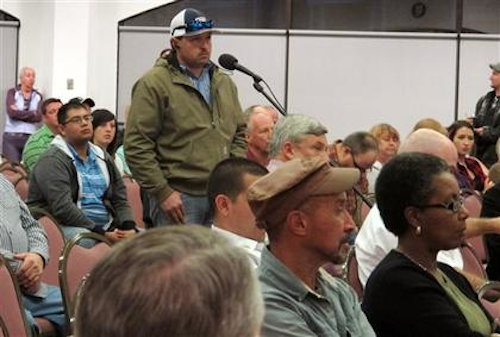 CARLSBAD, N.M. (AP) -- Residents and local elected officials voiced frustration Thursday with the amount of information being released by the U.S. Department of Energy about a radiation leak last month at the nation's only underground nuclear waste dump.

John Heaton, a former state representative and head of Mayor Dale Janway's nuclear task force, said at a town hall meeting here that the community feels as if it's being sidestepped and that things are being orchestrated in Washington, D.C. rather than involving Carlsbad.

Energy department officials said there's no intent to hide anything and that some information is simply not known.

Questions about what caused the leak at the Waste Isolation Pilot Plant, the extent of the contamination and the future of the federal government's national nuclear cleanup efforts have been swirling for weeks now.

Some of the uncertainty was quelled late Wednesday when officials announced that the level of radioactive particles being captured by monitoring stations in the Carlsbad area had decreased significantly and were close to normal.

Officials said further testing on the 13 workers who were at the plant at the time of the leak shows they aren't likely to experience any serious health effects.

Janway told the town hall meeting's audience that the systems at plant worked, with filters capturing most of the radiation that escaped from the underground mine. Still, he said the investigation needs to be swift and efficient.

"The longer it takes to get to the bottom of this incident, the more damaging it is to Carlsbad and this project," Janway said.

David Klaus, the Department of Energy's deputy undersecretary for management and performance, said the question is not whether the underground nuclear waste dump will reopen but when.

Klaus drew a round of applause from the crowd when he said there's no question the plant will continue, at some point, with its mission to help the nation clean up waste from decades of nuclear defense projects.

Department of Energy officials said work is ongoing to get air-monitoring equipment into the mine that will pave the way for specially trained crews to enter. They plan to make their way to two storage areas known as Panel 6 and Panel 7 to determine what might have happened.

Earlier Thursday, U.S. Sens. Tom Udall and Martin Heinrich said they met with Energy Secretary Ernest Moniz and other federal officials, including those at the Environmental Protection Agency, and were given assurances that progress was being made at the site.

They said officials hoped to send an unmanned probe underground to monitor the site in the next week, followed by workers if they believe it's safe to go inside.

"I want to assure you that we are working diligently to address your questions and concerns," Jose Franco, manager of the Department of Energy's Carlsbad Field Office, told the community in a letter. "We have not faced this kind of challenge in our 15-year history of waste operations, but I have the utmost confidence in the recovery team."

The repository stopped taking shipments after a truck hauling salt through the underground mine caught fire Feb. 5. Several workers were treated for smoke inhalation, and the mine was temporarily closed.

Nine days later, sensors alerted to a release of radiation from the underground portion of the mine. Monitors as far as half a mile away later detected elevated levels of plutonium and americium in the air.

The Department of Energy, the federal EPA and the repository's managers have all said there's no public health threat. But watchdog groups have questioned whether officials are holding back information related to the leak.

In the hopes of finding out what may have happened underground, Franco said a specially trained team is preparing to enter the mine next week after air-monitoring equipment is sent inside to gauge the level of contamination.