Investigators have seized more than $21.6 million in knockoff souvenir football jerseys, caps and other merchandise, shut down illegal websites and made dozens of arrests in a crackdown on Super Bowl counterfeiters, authorities said Thursday. 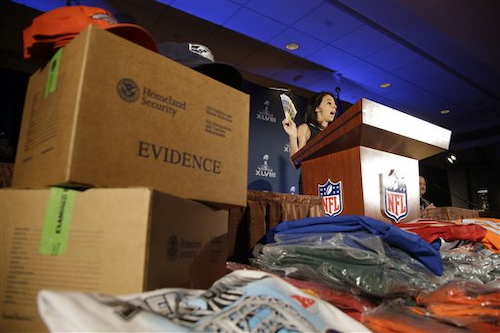 NEW YORK (AP) -- Investigators have seized more than $21.6 million in knockoff souvenir football jerseys, caps and other merchandise, shut down illegal websites and made dozens of arrests in a crackdown on Super Bowl counterfeiters, authorities said Thursday.

The seizures and arrests were announced at a Manhattan news conference where NFL and law enforcement officials displayed fake Payton Manning and Russell Wilson jerseys — complete with knockoff Adidas labeling — Broncos and Seahawks hats, Super Bowl T-shirts and other goods made to look like official NFL gear.

The league and law enforcement "are working hard to prevent fans from being scammed by criminals seeking to profit from the public's passion for the NFL, their home teams and the Super Bowl," Anastasia Danias, an NFL senior vice president, said in a statement issued three days before the game in East Rutherford, N.J.

During an eight-month operation, investigators seized more than 202,000 Super Bowl-related items that, if legitimate, would have been worth more than $21.6 million. Authorities called the dollar amount a record for similar enforcement operations before other Super Bowls, including one last year that netted about $17 million in seizures.

Authorities say most of the knockoffs were manufactured in China. They say once the makers learned the Broncos and Seahawks made the Super Bowl, they rushed to make the goods with the teams' logos. Then the goods were smuggled into the United States, often using overnight shipping.

Some of the items make their way to street corners in Times Square and elsewhere where they are sold for half the price or less of legitimate merchandise. But others are offered on websites designed to trick buyers into thinking they are purchasing officially licensed goods worth the nearly full price they pay.

U.S. Immigration and Customs Enforcement has obtained court orders to shut down several of the bogus Super Bowl gear websites. Authorities warn that users of the websites risk identity theft, and that proceeds can go to other illegal activities like drug trafficking.

Earlier this week, New York authorities announced the arrest of two men on charges they made high-quality counterfeit Super Bowl tickets and sold them online.