The study sponsored by the Robert Wood Johnson Foundation found that between 2007 and 2012 the companies reduced their products' calories by the equivalent of around 78 calories per person per day. The total is more than four times the amount those companies had pledged to cut by next year. 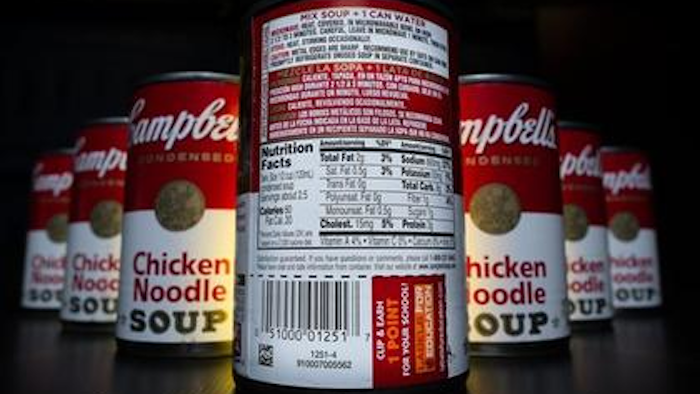 WASHINGTON (AP) — Some of the nation's largest food companies have cut daily calorie counts by an average of 78 per person, a new study says, more than four times the amount the industry pledged to slash by next year.

The study sponsored by the Robert Wood Johnson Foundation found that between 2007 and 2012, the estimated total cut in food product calories from a group of 16 major food companies was in the range of 6.4 trillion.

Seventy-eight calories would be about the same as an average cookie or a medium apple, and the federal government estimates an average daily diet at around 2,000 calories. The study said the calories cut averaged out to 78 calories per day for the entire U.S. population.

The Robert Wood Johnson Foundation signed on to hold the companies accountable, and that group hired researchers at the University of North Carolina at Chapel Hill to painstakingly count the calories in almost every single packaged item in the grocery store. To do that, the UNC researchers used the store-based scanner data of hundreds of thousands of foods, commercial databases and nutrition facts panels to calculate exactly how many calories the companies were selling.

The researchers aren't yet releasing the entire study, but they said Thursday that the companies have exceeded their own goals by a wide margin.

Dr. James Marks, director of the Health Group at the Robert Wood Johnson Foundation, said the group is pleased with the results but the companies "must sustain that reduction, as they've pledged to do, and other food companies should follow their lead."

The Robert Wood Johnson Foundation is a nonpartisan philanthropic and research organization that works to improve the nation's health.

Even though the companies that made the commitment represent most of the nation's most well-known food companies, they sold only a little more than a third of all packaged foods and beverages at the beginning of the study. Missing are many off-label brands sold under the names of retailers, and it's unknown whether those products have changed.

It is also unclear how the reduction in calories translates into consumers' diets. When the companies made the pledge in 2010, they said one way they would try and reduce calories would be to change portion sizes in an attempt to persuade consumers to eat less. The companies also said that they would develop new lower-calorie options and change existing products so they have fewer calories.

Evidence of those efforts are visible on any grocery store shelf. Many products now come in lower calorie versions, are baked instead of fried, or sold in miniature as well as larger versions.

Marks says he believes that companies' efforts to package smaller servings — 100 calorie packs of popular snacks, for example — and smaller cans of sugary drinks may have contributed to the reduction in calories. He says the main contributors most likely were the public's increasing willingness to buy healthier foods and companies responding to those consumers.

The companies involved are all part of an industry coalition of food businesses called the Healthy Weight Commitment Foundation that has organized to help reduce obesity. The foundation pledged to reduce the calories as part of an agreement with a group of nonprofit organizations and made the 2010 announcement as part of first lady Michelle Obama's Let's Move campaign to combat childhood obesity.

She said the companies achieved the goal by coming together and also competing to make new lower-calorie foods. Market studies have shown that many of the healthier foods have outperformed other products, she said.

"This is a very significant shift in the marketplace," Gable said.

Nutrition advocate Margo Wootan of the Center for Science in the Public Interest agrees that there has been a shift, but she says it is too soon to know how much credit the food companies can take.

"It's hard to know how much of this is due to proactive efforts by the food and beverage industry as opposed to heightened concern by the American public about obesity and nutrition," Wootan said. Also, she noted that food sales were down in general as the economy stumbled, and that could be a factor in the lower numbers as well.

Still, she said the 78 calorie drop is good news.

"From a public health standpoint that's meaningful," she said.