News that ThyssenKrupp planned to sell the $5 billion mill just five years after it opened sent a ripple through the region, which depended on well-paying jobs related to the mill throughout the economic downturn. ThyssenKrupp has said its plan to import steel slabs from its plant in Brazil fell apart because of the recession and increasing production costs in Brazil. 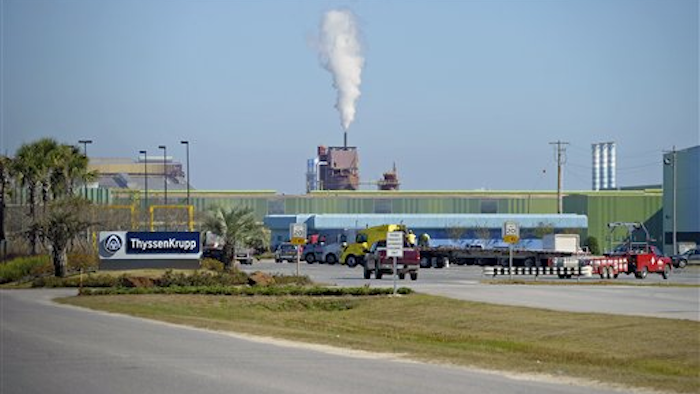 CALVERT, Ala. (AP) — When German steel manufacture ThyssenKrupp began construction of its $5 billion plant just down the road from Webbs Cafe in 2007, business boomed as construction crews poured into the area to build the most-modern steel production factory in the Americas.

Three generations of the Webb family have operated the cafe, which specializes in fried catfish and home cooking and is well-known throughout this bucolic stretch of southeast Alabama.

News that ThyssenKrupp planned to sell the mill just five years later sent a ripple through the region, which depended on well-paying jobs related to the mill throughout the economic downturn.

But word this month that the German company has reached an agreement with ArcelorMittal and Nippon Steel & Sumitomo Metal Corp. to sell the plant for an estimated $1.55 billion, seemed to quell concerns at Webbs Cafe and elsewhere in this tight-knit town just outside the gates of the mill.

"I don't sense much fear about the future of the mill. Everyone just wants them to hurry up and finish the deal," said Vanessa Barnett, the latest member of the Webb family to run the cafe.

As she prepared for her noontime rush on a recent weekday, Barnett said people feel reassured that operations at the mill will continue.

"There has been a lot of talk and speculation about what happened and why they decided to sell, but not about it shutting down," she said.

ThyssenKrupp has said its plan to import steel slabs from its plant in Brazil fell apart because of the recession and increasing production costs in Brazil.

The deal still has to pass regulatory scrutiny, but local and state officials say it looks good. The new owners have a business plan that hinges in part on supplying the recovering U.S. automobile industry.

Alabama Gov. Robert Bentley told The Associated Press that he believes the new owners will bring stability to the plant and secure existing jobs.

"It is a brighter future," he said.

While ThyssenKrupp relies on supplies from Brazil, the new owners plan to use that country, Mexico and the United States, which should help their costs, Bentley said. And he said the plan to produce for the auto market seems solid.

Scott Posey, a spokesman for the plant, said the deal is expected to be finalized sometime next year, "dependent upon all the necessary regulatory approvals."

In an emailed statement, Posey said the future of the plant looks good. Although ThyssenKrupp is leaving Alabama, it is leaving behind the world's most-advanced processing facility, he wrote.

"We believe the ArcelorMittal/Nippon Steel & Sumitomo Metal Corporation consortium's interest in buying our facility is confirming its future value to the NAFTA steel industry and securing our 1,600-plus local jobs and continued economic impact in Alabama for generations to come," Posey said.

Because operations at the mill will continue, state and local officials say the millions of dollars in subsidies provided to the company to attract the plant to the region remain a good investment.

"We fully expect development around the mill to continue. In fact, we think there has been some hesitancy by companies because they didn't know who the new owners would be and now I think we will see even more projects related to the steel mill," said Troy Wayman, vice president of economic development for the Mobile Area Chamber of Commerce.

Marceria Ludgood, a Mobile County commissioner who represents the area, said that for people outside the mill, the only noticeable change might be the German flag that flies above the plant now being taken down and another flag going up.

"I have very high expectations and high hopes for what will happen there. The company that is purchasing it has very solid relationships in the automotive industry and I think this will open up even more opportunity for other, related businesses to come in," she said.

Ludgood said she and other local leaders were worried when rumors of the plant being sold first surfaced.

"But we didn't think they would abandon a facility that was the most-modern anywhere and cost so much to build," she said.

"It is nice though to have it settled," she said.

Convenience store clerk Angel Powell chatted with a steady stream of regular customers on a recent afternoon. Powell credits the mill for her job at the new store just outside the mill, which she says has been a boon for the town.

"All I can say is that I hope it stays open, but I cannot see why it wouldn't," she said. "It has been a good thing for this entire area."