Sysco To Buy US Foods For About $3.5B

One of the largest food supply companies is buying one of its key rivals, creating an even larger, global distribution company.Sysco is buying privately held US Foods for about $3.5 billion in cash and stock. 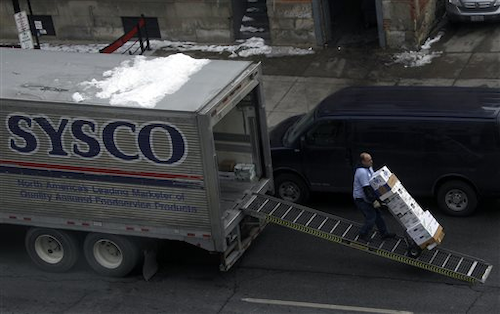 HOUSTON (AP) -- One of the largest food supply companies is buying one of its key rivals, creating an even larger, global distribution company.

Houston's Sysco will pay $3 billion in common stock and $500 million in cash. It will also assume or refinance about $4.7 billion in debt. That puts the total value of the deal at about $8.2 billion.

For the fiscal year that ended in June, Sysco's sales totaled $44.41 billion. It trucks food and cooking supplies to about 425,000 customers through 193 locations in the U.S., Bahamas, Canada, Ireland and Northern Ireland.

US Foods' customers include independent and chain restaurants, health care and hospitality companies, and government and educational institutions. Major stakeholders in the company, based just outside of Chicago, in Rosemont, Illinois, include Clayton, Dubilier & Rice LLC and Kohlberg Kravis Roberts & Co. LP.

Representatives from both of those investment firms will join Sysco's board.

When the deal closes, US Foods shareholders will own about 87 million shares, or about 13 percent, of Sysco's common stock.

The buyout has been approved by the boards of both companies. Sysco said it expects the deal, which is set to close in the third calendar quarter of 2014, to immediately boost its profit after adjusting for acquisition-related costs and expenses. It's also expected to create annual cost savings of at least $600 million after three or four years.

Moody's Investors Service placed all of Sysco's ratings, including its investment-grade "A1" long-term rating, under review for possible downgrade. Moody's said that while the deal makes sense and the price seems fair, a downgrade is likely given the amount of debt Sysco will assume.