Fast food worker Caitlin Turowski had this much in common with high-paid CEOs: When she quit her job, she couldn't work for a competitor. Hired as a delivery driver for sandwich maker Jimmy John's and later made an assistant manager, Turowski said she signed a two-year non-competition agreement banning her from... 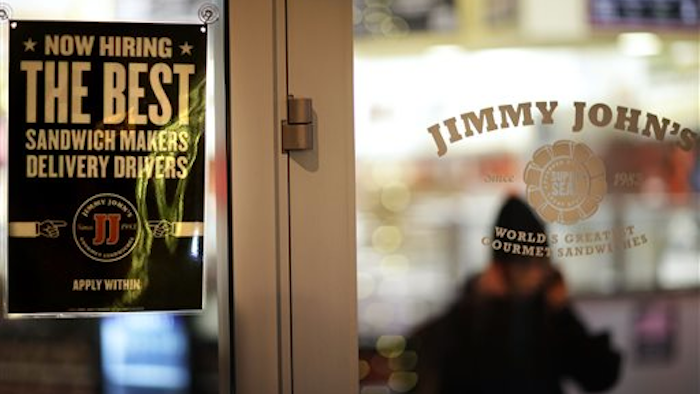 Fast food worker Caitlin Turowski had this much in common with high-paid CEOs: When she quit her job, she couldn't work for a competitor.

Hired as a delivery driver for sandwich maker Jimmy John's and later made an assistant manager, Turowski said she signed a two-year non-competition agreement banning her from working for sandwich-making rivals within three miles of a Jimmy John's store. Burned out by long hours and low pay, Turowski quit in July, then took a pay cut to work in insurance telemarketing. She could earn more waitressing or bartending, but fears being sued.

Non-competition agreements are better known in contracts for senior executives who have business secrets of interest to competitors. However, court records show the restrictions have also snared maids in Chicago, a nail stylist in Texas, cable TV installers in Michigan and agricultural workers in Washington. In October, Democrats in Congress asked the U.S. Federal Trade Commission and Department of Labor to investigate.

The agreements for low-wage workers might trap them in their current jobs, allowing their employers to pay them lower salaries, experts said. "It has a chilling effect on people actually going out and trying to seek jobs because they fear getting sued," said Kathleen Chavez, an attorney for Turowski and others. "This is not like a high-wage, skilled worker who says, 'OK, let them sue me. I'll defend myself.'"

Employers might seek noncompetition agreements because they fear losing money training a worker who quits or who brings business secrets to a rival.

"You certainly wouldn't want anyone to know in the competitive landscape what's around the corner," Home Depot spokesman Stephen Holmes said. The retailer signs non-competes with senior executives.

Researchers say there's evidence non-competes limit pay for executives, and the same trend could hold for the rank-and-file.

"If you can't leave, you don't have leverage," said Matthew Marx, a professor at MIT's Sloan School of Management.

States differ on enforcement. Almost three dozen states allow judges to rewrite defective non-competition agreements, according to Russell Beck, a corporate law attorney who conducts national reviews. In a few states, he said, judges can strike problematic restrictions but keep the rest of the deal. Just under half-a-dozen states require that judges completely toss non-compete agreements if any part of it is legally flawed. Three states ban the agreements.

It's unclear how many workers are subject to the deals.

"The idea that they're only for high-skilled workers is only wishful thinking," said Evan Starr, a labor economist at the University of Illinois. He's started analyzing results from a survey asking more than 11,500 people across the workforce about noncompetition agreements. "Workers just sign them — they don't even think twice about it."

Jimmy John's employees cannot work for any employer that gets more than 10 percent of its revenue from selling sandwiches within three miles of a Jimmy John's shop, according to a version of the agreement filed in court.

Jimmy John's officials did not return messages seeking comment, and it's unclear whether the company has enforced the non-competes. Turowski said she once overheard a Jimmy John's manager phone another store to warn against hiring an ex-employee from her location.

Enforcement threats alone may help employers. A house-cleaning service in Chicago, Super Maid LLC, required its maids to sign non-competes, according to a U.S. Department of Labor complaint. The government said the maids scrubbed floors on their hands and knees, got chided for eating lunch and received less than minimum wage.

In a court filing, maid Mariana Bahena said, "... If I worked for any Super Maid customers, I would get sued, which made me afraid." The deal also banned maids from working for other cleaning services. Owner Paul Krawczyk said he never enforced it.

"I never sued anybody over this," Krawczyk said in a deposition, "just kind of trying to persuade them not to do it because it's hurting my profits and company."