Washington Gov. Jay Inslee on Wednesday proposed an ambitious cap-and-trade program to require the state's largest industrial polluters to pay for every ton of carbon they release. The proposal was part of a broader package that the Democrat said would help the state meet a 2008 mandate to drastically reduce... 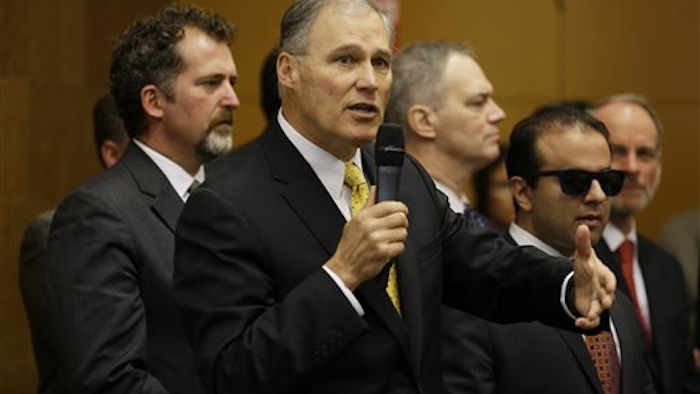 Washington Gov. Jay Inslee on Wednesday proposed an ambitious cap-and-trade program to require the state's largest industrial polluters to pay for every ton of carbon they release.

The proposal was part of a broader package that the Democrat said would help the state meet a 2008 mandate to drastically reduce greenhouse gas emissions blamed for global warming. It sets an overall limit on heat-trapping gases similar to a program that California launched nearly three years ago.

"It is primarily and foremost an issue of health for our children and our grandchildren," said Inslee, who was flanked by Democratic lawmakers and other supporters at a news conference at REI's flagship store in Seattle. "It's not only a good idea, it's the law," he added.

ers hailed the plan as historic and bold, saying it will protect human health and the environment. Meanwhile, critics questioned whether the cap-and-trade program would raise gas and energy prices and harm families and businesses.

The proposal must be approved by the Legislature and is certain to face resistance. Republicans, who will have outright control of the Senate next year, have voiced opposition.

Inslee, who has made tackling climate change a key issue since taking office two years ago, said the plan would raise nearly $1 billion in its first year, which would begin in July 2016.

Money raised by selling allowances to pollute would pay for transportation projects, education-funding requirements imposed by the state Supreme Court, and assist low-income families and industries that are most affected by higher energy costs.

Republican state Sen. Doug Ericksen, who chairs the committee that deals with environment and energy issues, said the governor's plan "would make it more expensive to take a family vacation, drive your kids to soccer practice and heat your home."

Ericksen called it "a general fund tax increase" that will hurt working families and businesses. He said he'll work to come up with clean energy solutions that aren't so costly.

The plan could raise fuel prices by 7 to 15 percent above what they would be by 2035, according to state estimates.

Among other initiatives proposed Wednesday, Inslee said he asked state regulators to draft a low carbon fuel standard similar to California's first-in-the-nation mandate. Inslee said he wants to hear from lawmakers and others before beginning a formal process on a rule that would require cleaner fuels over time.

Inslee also proposed extending a break on sales tax for the first $60,000 on the cost of an electric vehicle, creating a $60 million fund to support clean-energy research and improving state incentives for solar energy.

The key part of the plan is cap-and-trade. Under that market-based program, the state would set an overall cap on carbon emissions and require the state's biggest polluters to pay for each metric ton of pollution emitted. The price would be set at an auction. Polluters can sell excess permits they don't need to others.

The proposal would apply to about 130 large facilities, including refineries, power plants and steel mills, or those that emit more than 25,000 metric tons of greenhouse gases a year. It will cover about 85 percent of all the state's carbon emissions.

The overall cap on greenhouse gases would decrease over time, so fewer permits are issued, increasing their value on the market.

Companies may decide to pay for every metric ton they emit, or find that there's more financial incentive for them to cut their pollution by becoming more energy efficient or finding newer technologies to reduce pollution.