Margery A. Beck, The Associated Press 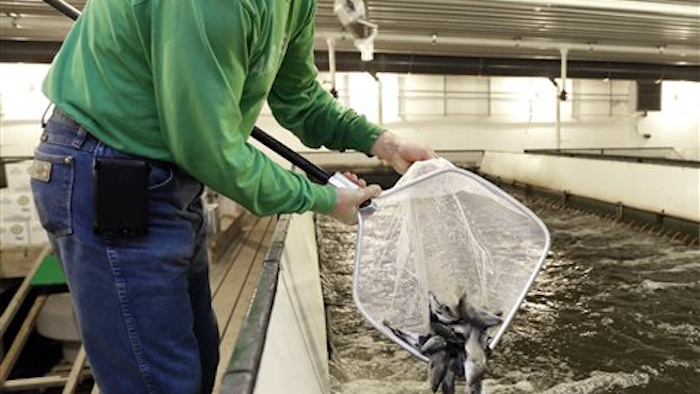 The latest of five generations who have worked the same ground in northeastern Nebraska, 52-year-old Scott Garwood, isn't growing corn or cattle — it's fish.

Farmers are increasingly embracing the practice as a way to stay in agriculture and participate in what's billed as "green" food production, with virtually no chance of their fish spreading disease or genetic mutation into the wild. And such tank systems can be placed almost anywhere — from Minnesota to Florida — because temperature and water quality can be controlled.

Moreover, there's a market for these land-grown fish. The U.S. imports more than 90 percent of the 4.5 billion pounds of seafood it consumes a year.

Globally, aquaculture supplies more than 50 percent of all seafood produced for human consumption, but only a fraction comes from the United States, according to the National Oceanic and Atmospheric Administration Fisheries. Even less is known about how much the U.S. produces in indoor tanks.

"I'm afraid to tell you, the U.S. is way behind the rest of the world in terms of developing aquaculture or keeping up with production of aquaculture," says Dr. Yonathan Zohar, chairman of the Department of Marine Biotechnology at the University of Maryland. "If you look at the U.S. production numbers, it's mostly catfish — which is a good industry, but we need to be looking at some of the marine species we've been running out of."

Some critics have suggested that the tanks — sometimes called closed containment systems — could be susceptible to catastrophic losses in the event of a power and backup generator outage. But Zohar, whose life work is in aquaculture, says the advantages outweigh "what-if" scenarios. Land-based tank fish farming nearly eliminates fish manure runoff and water waste through use of water recirculating and treatment systems, he noted.

"This technology lets us ... raise fish in a very clean environment, very optimized for their health," said Steven Summerfelt, who is the director of The Conservation Fund's Freshwater Institute in West Virginia. "It's free from disease. We haven't used antibiotics, pesticides, anything, to treat the water or the fish for over a decade, because we keep the diseases out."

Summerfelt had assumed those factors would drive the demand for tank-raised fish, but found, "What consumers really love is that it's locally grown."

Garwood and his father first branched out from row crops and livestock about 10 years ago, building a quarter-acre greenhouse to grow tomatoes commercially. About a year ago, they built a warehouse with 18 tanks to produce about 140,000 pounds of barramundi a year.

"We're in a developing urban area, so finding ground to continue our row crop operation and to keep it sustainable was a challenge," Garwood said. "So, we began looking out for other ways we could stay in agriculture."

Within the next two years, Garwood hopes to expand to 48 tanks and become part of a fish producing cooperative with other Midwest fish farms — including Iowa's First. The central Iowa fishery recently paired with VeroBlue Farms to build an indoor operation expected to produce 4 million pounds of fish annually by 2017, VeroBlue President Keith Driver said.

VeroBlue and other U.S. fish farms currently import fry — recently hatched fish about a quarter-inch long — from a fish hatchery in Australia. They nurture the fish to about 2 to 2 1/2 pounds for market.

"As you can imagine, you can bring over a lot of little quarter-inch fish relatively cheap," Driver said. "You need to hit a really big volume before it makes sense to put in your own hatchery and duplicate all that work."

Zohar and others say growing the world's food fish in tanks is no passing fad.

"There is a need for marine aquaculture so we can leave the wild stock alone so they can recover," Zohar said. "We don't hunt and gather chickens or cows. Why do we still do it for fish?"