Obama Tells CEOs He Wants To Work On Wage Growth

Citing 60-year high corporate profits, President Barack Obama told CEOs Wednesday he wants to engage them on "some tricky questions" about how to overcome stagnant wages in the face of business successes and a rising stock market. In a question and answer session... 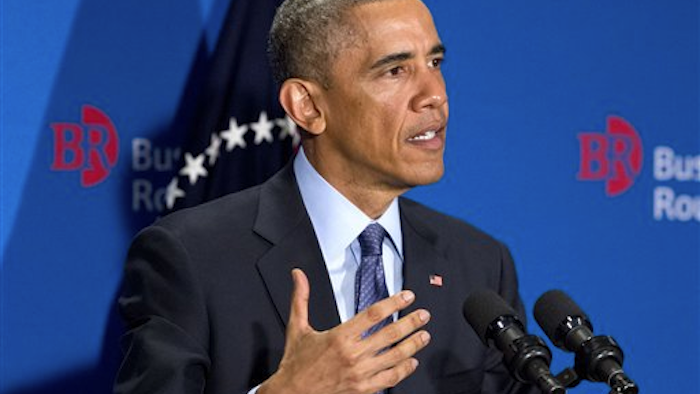 Citing 60-year high corporate profits, President Barack Obama told CEOs Wednesday he wants to engage them on "some tricky questions" about how to overcome stagnant wages in the face of business successes and a rising stock market.

In a question and answer session with more than 100 top executives, Obama said he is generally optimistic about the U.S. economy but said he worries that prosperity is not felt by all Americans.

"Domestically the area where I have the deepest concern is the fact that although corporate profits are at the highest levels in 60 years, stock market is up 150 percent, wages and incomes still haven't gone up significantly," the president said at a session with members of the Business Roundtable. "That's part of what's causing disquiet in the general public, even though the aggregate numbers look good."

Some executives questioned Obama about the prospects for success on areas where he and Republicans could cooperate, and one gently pushed back on the subject of wages for American workers.

"Any one or any combination or all of them would lead to economic growth, job creation, and everyone in here wants to grow and everyone wants to add jobs and we all want to raise pay, believe it or not. It's what we want to do," he said.

In the wide-ranging discussion, Obama told the CEOs he will make a push to conclude a trade deal with Europe and work through obstacles in the way of a broad trans-Pacific trade agreement. He also listed an overhaul of the tax system, spending on public works projects and immigration as other topics where he and the new Congress could find common ground.

Heavy Democratic losses in the elections diminished Obama's prospects for passing most of his other legislative priorities before leaving office.

His remarks came ahead of his meeting later Wednesday at the White House with Republican Sen. Mitch McConnell, the incoming Senate majority leader in the new Congress. McConnell said Tuesday that trade was among the issues where he and Obama could work, but noted that is an issue more popular with Republicans than Democrats.

Obama defended government regulations, a frequent target of corporate criticism, and he conceded that trade would be a difficult issue to sell to Democrats who worry that such agreements encourage companies to move business out of the U.S. to countries with lower labor and environmental standards.

Obama said he had advice for Democrats: "Don't fight the last war."

"Those who oppose these trade deals ironically are accepting a status quo that is more damaging to American workers," Obama said.