Democratic Gov. Dannel P. Malloy and Republican businessman Tom Foley officially kicked off their gubernatorial rematch with a feisty debate on Wednesday night, clashing over guns and who is best equipped to grow jobs and improve Connecticut's economy. The tenor of the hour-long event, held in a... 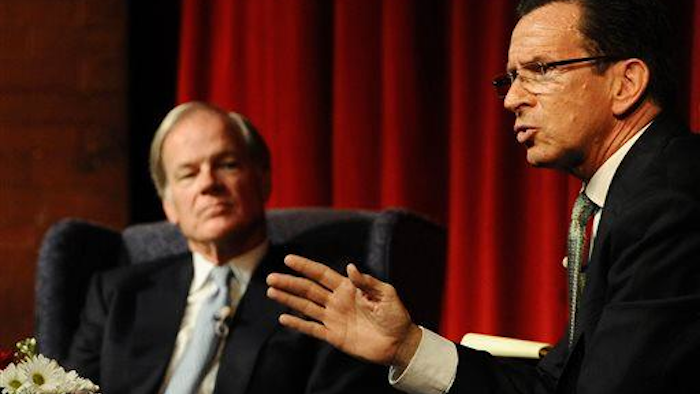 Democratic Gov. Dannel P. Malloy and Republican businessman Tom Foley officially kicked off their gubernatorial rematch with a feisty debate on Wednesday night, clashing over guns and who is best equipped to grow jobs and improve Connecticut's economy.

The tenor of the hour-long event, held in a steamy auditorium at Norwich Free Academy, mirrored the spate of recent TV ads the candidates and their supporters have been running.

Foley disputed Malloy's claims that his administration has made progress in righting the state's economy. He called job growth under Malloy "anemic" and said the first-term Democrat has driven jobs out of Connecticut, accusing him of "bribing people to stay here" with expensive economic development packages.

"Governor, this is not working," said Foley. "We have the worst job recovery rate or one of the worst in the country."

Malloy touted his record since he took office in 2011, claiming 60,000 private sector jobs have been created. He also added how he successfully pushed to raise the state's minimum wage to $10.10 an hour by 2017.

"You can say as many bad things as you can about me, but I take pride in what we're doing," Malloy said. "We're building a stronger and better Connecticut."

Malloy beat Foley by 6,404 votes in 2010 and polling indicates this year's race could also be close.

Malloy also blamed Foley for the 1995 closure of a Georgia textile mill Foley's company had owned. It's the focus of a recent TV ad, which resembles ads from the 2010 race. It's also an accusation Foley has repeatedly denied, saying new owners made the decision to shutter the plant and that he helped to grow jobs from less than 2,000 to 5,000 over an 11-year period.

Malloy argued the mill's closure is reason to question Foley's claims he knows how to create jobs in Connecticut, adding how he doesn't think Foley is telling the truth about what happened with the Bibb Manufacturing Company. Foley retorted that voters care more about being able to afford to live in Connecticut, not the Georgia textile company.

"Why are you spending so much time looking at some deal I supposedly did in the 1990s," Foley questioned Malloy. "You must have spent hours on this." Shortly before the debate, his campaign released a nine-page plan for "restoring pride and prosperity in Connecticut."

At one point, Malloy peppered Foley with questions about his concerns with the wide-ranging gun control legislation passed after the 2012 mass shooting at Sandy Hook Elementary School in Newtown. Foley, a critic of the law, has been reticent to discuss his specific concerns.

Malloy credited the legislation with helping to lower the state's crime rate. A 2014 mid-year report, prepared by Malloy's administration, found there were 86 murders in 2013, a 32 percent reduction from 129 murders in 2011 and the second lowest total in 40 years.

Foley, who said urban crime is still too high, has said he will not seek to repeal the gun control legislation, which bans future sales of more assault weapons and large-capacity ammunition magazines. But he accused Malloy of "overreaching" with the legislation, questioning why gun owners could be in violation of the law if they failed to register their grandfathered weapons.

"Absolutely, that aspect of the law I would change," Foley said. "I don't think you turn perfectly good law-abiding citizens, who are responsible people, who believe in the Constitution of the United States, and flip something on them so that something they did in the past turns them into a felon."

Both candidates have said they're willing to participate in multiple debates before the Nov. 4 election.