As Wine Fakers Get Sharper, Industry Fights Back

Counterfeiting has likely dogged wine as long as it has been produced. In the 18th century, King Louis XV ordered the makers of Cotes du Rhone to brand their barrels with "CDR" before export to prevent fraud. But it is getting more sophisticated and more ambitious, particularly as bottle prices rise due to huge demand in new markets, mainly in Asia. 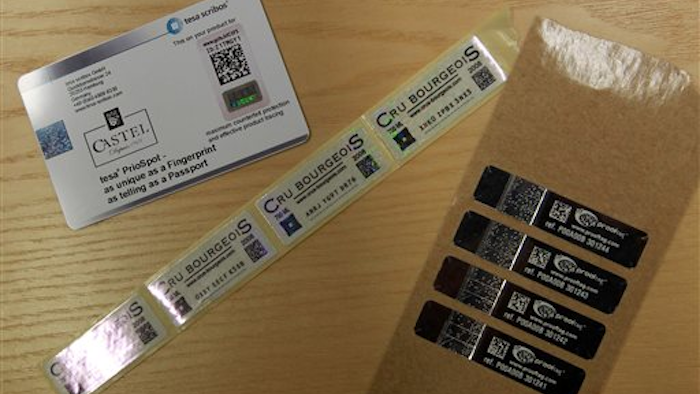 SAINT-EMILION, France (AP) -- An FBI agent recently showed Arnaud de Laforcade a file with several labels supposedly from 1947 bottles of Chateau Cheval Blanc, one of France's finest wines. To the Saint-Emilion vineyard's CFO, they were clearly fakes — too new looking, not on the right kind of paper.

But customers may be more easily duped.

Regardless of his skill, the counterfeiter had ambition: 1947 is widely considered an exceptionally good year, and Cheval Blanc's production that year has been called the greatest Bordeaux ever. The current average price paid for a bottle at auction is about $11,500, according to truebottle.com, which tracks auctions and helps consumers spot fakes.

Counterfeiting has likely dogged wine as long as it has been produced. In the 18th century, King Louis XV ordered the makers of Cotes du Rhone to brand their barrels with "CDR" before export to prevent fraud.

But it is getting more sophisticated and more ambitious, particularly as bottle prices rise due to huge demand in new markets, mainly in Asia. After decades of silence, producers across the $217-billion industry are finally beginning to talk about the problem and ways to combat it.

The astronomical prices paid for fine wine these days makes the bottles "more than just a luxury item," said Spiros Malandrakis, senior analyst of the alcoholic drinks market at Euromonitor, a research firm. "They become a currency in themselves. And as with every currency, at some point, people want to find ways to manipulate that and make more money."

SIZING UP THE PROBLEM

Experts say it's impossible to know the size of the counterfeit market. Partially that's because many sales happen privately and because it is woven into a legal market, unlike, say, cocaine trafficking. Many known counterfeits likely go unreported because the victims are embarrassed — and chagrined to lose their investment. Industry insiders, meanwhile, have long ignored the problem collectively as producers were afraid of scaring customers.

But many experts agree on one point: the quantity of rare bottles from illustrious vineyards being auctioned is just too high to not include fakes.

"I think it's pretty obvious to everybody that there is a relatively large amount of counterfeit wines from these top wineries that is on the market," said Leonardo LoCascio, founder of Winebow, a leading U.S. importer of wine.

Maureen Downey, an expert wine appraiser and authenticator who founded Chai Consulting, says it is important not to overestimate the problem, guessing it is still probably a very small proportion of the global wine trade, but she added that many producers think that recent publicity on the problem means it's been solved.

Not so, she and others said. In fact, it will likely simply get more sophisticated and even harder to track and estimate.

China's case is a good illustration of the evolution of counterfeiting. Initially, criminals took advantage of the country's twin weaknesses: consumers who were new to wine but had the money to buy it for show. That led to flagrant fakes, whose labels simply piled on the names — or near names — of as many famous vineyards and locales as possible, claiming, for example, to be a great Burgundy wine from a famous Bordeaux chateau.

But in the past two years, as more Chinese became connoisseurs, there has been an explosion in Asia of more refined counterfeits, says Mark Solomon, who co-founded truebottle.com.

Experts fear this problem will only continue to grow and won't be confined to Asia, as technology makes it possible to make better fakes and steadily rising auction prices make it worth the while.

On the front lines of that race is Bernard Medina, who is the director of a lab run by the French Finance Ministry in Bordeaux devoted to sniffing out fake wine. He recently laid out at least 15 bottles when journalists came to visit that ran the gamut from the silly to the serious. Some were outrageous amalgamations, like the bottle that had "Luxembourg" on the label and "produit de France" below that. Others were trying to give consumers just a soupcon of glamour: Chatelet Cheval Blanc, another attempt to copy the illustrious Chateau Cheval Blanc. Most of the bottles were picked up in China by French customs or fraud agents and would easily be sorted out.

But Medina also sometimes receives bottles from chateaux in the surrounding area, which is home to many of the world's best wines. These are suspected fakes but so well done that even the owners aren't quite sure if they might be real.

Medina's lab runs a series of tests on bottles that come their way: measuring the isotopes of certain elements can determine generally which country a wine comes from, measuring the trace radioactivity in a bottle can broadly determine its age. Wines that claim to be from before the invention of the atom bomb, for instance, should have no cesium-137. By contrast, bottles from the 1960s, when nuclear tests happened almost weekly, show a noticeable spike in cesium.

The lab also makes its own wines from grapes collected about every 30 miles (50 kilometers) across Western France. Each of those wines then serves as a reference point for a given year and micro-region.

None of these tests is definitive, but, taken together, they can generally sniff out the fakes. Medina warns, however, that over the past year he has been seeing fewer of the gross counterfeits and expects criminals are focusing on harder to spot, more lucrative fakes.

For instance, counterfeiters buy up old, empty bottles from the best vineyards, so the wine would pass a test that sampled the bottle's glass or inspected the label. A recent search on eBay showed several old, empty bottles were for sale, including a 1958 Chateau Lafite Rothschild, a 1928 Chateau Margaux and a 1971 Romanee Conti — all of which are some of the most counterfeited wines.

Several wineries are laser-engraving their bottles with unique serial numbers. Other wineries are experimenting with hologrammed or bar-coded stickers placed half on the bottle, half on the capsule — the foil that covers the cork — that serve as id tags and will shred if removed. The Bordeaux winegrowers' professional association has created an app, called Smart Bordeaux, that it bills as the "Shazam for wine." Point your cell phone camera at a wine bottle's label and the app will give you information about the wine and contact details for the winery. Smart Bordeaux is also keeping a database of labels that appear to be fakes.

Hindering the industry's ability to shake out the forgeries is the wine industry's secretiveness. It is a discrete business, conducted quietly among a relatively small number of people who know one another. When a bad apple worms its way into that circle, many it seems would rather swallow their losses than rat out their "friends" and admit their own ignorance.

Bill Koch, the billionaire businessman whose cellar includes 43,000 bottles of wine, says he has upset that order by becoming a vocal crusader against fakes. He started collecting wine about 40 years ago and has bought some of the most sought-after wines in the world, including bottles that purported to be part of Thomas Jefferson's private collection.

Those were the first bottles Koch discovered were fake, but the experience led him to hire experts to sniff out the other forgeries. They have found 500 to 600 counterfeit bottles, for which he paid between $4 million and $5 million — and the experts aren't yet finished.

"There's a code of silence in the entire industry," Koch said, but his lawsuits against the auction houses where he bought fakes have threatened that.

As have high-profile cases like the FBI's against Rudy Kurniawan, who is accused of selling $1.3 million worth of counterfeit wine — and believed to have put many more millions of dollars in fakes on the market.

"I think the ostrich strategy, hiding yourself and saying we'll figure it out later, is not satisfying," said Fabien Teitgen, who is in charge of winemaking at Smith Haut Lafitte in Bordeaux. "The best is to speak about it openly and to say what we're doing and let the consumers know what means there are to verify that they have the right product."

Not all wineries feel that way. Some, at the very highest levels of wine making, have told Koch that their wine is "too good to be faked."

Downey says consumers also have to get smarter, choosing a reputable merchant and resisting "deals."