7 Killed In Chinese-Run Factory In Italy

A fire early Sunday swept through an illegal, makeshift dormitory in a Chinese-run garment factory in Tuscany, killing seven, firefighters said. The blaze, which partially collapsed the factory's roof, broke out in a loft where 11 people were sleeping, said fire inspector Stefano Giannelli. 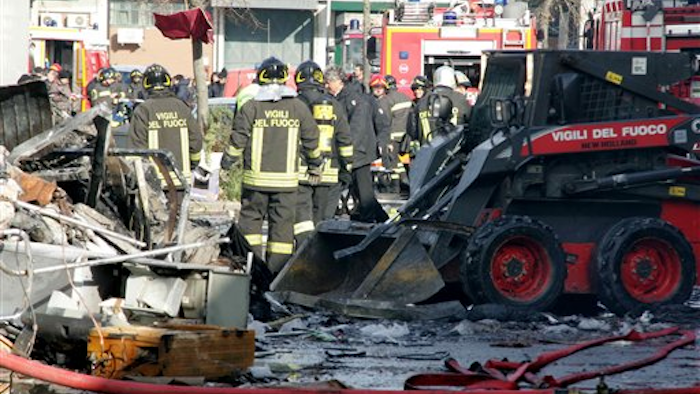 The blaze, which partially collapsed the factory's roof, broke out in a loft where 11 people were sleeping, said fire inspector Stefano Giannelli.

The cause was under investigation. Two people remained hospitalized, while two were treated and released, Giannelli said.

The Tuscan city of Prato has become a center for Chinese-run factories producing low-cost garments mostly for international retailers — an activity that has all but decimated Italy's own lower-end clothing industry. Many of the workers aren't declared to authorities, sleeping, eating and living in the factories where they work.

Tuscany's regional governor Enrico Rossi said there needed to be greater coordination between Italy and China on the thousands of businesses that have sprung up over the last two decades as well as better supervision of the structures. Rossi noted that numerous garment factories are in the hands of Chinese organized crime.

"This is on all of our consciences. We need to see the situation for what it is. This is the largest concentration of black-market labor in Italy's central north, probably all of Europe," Rossi said on Sky TG 24.

Prato Mayor Roberto Cenni said authorities inspect hundreds of the businesses each year, shutting down the ones found to be operating illegally.

"But they reopen in another area, with the same procedures," he told La7 private TV.

The business daily Il Sole 24 Ore reported that about 30,000 Chinese workers in Prato are employed by 3,500 companies that generate 2 billion euros ($2.7 billion) a year in revenues — half of those undeclared. That's alongside Prato's traditional textile industry employing some 20,000 workers in 2,800 companies generating 3 billion euros a year in revenues, the paper said.

An ex-military police officer passing by said he notified authorities of the fire. Leonardo Tuci told the Italian news agency ANSA that he saw smoke coming from the factory and Chinese workers screaming for help. One man was trying to put out the flames with a fire extinguisher.

"A Chinese woman, half wet and completely black due to the smoke was telling me, 'There are many other people on the mezzanine,' pointing to the highest part of the building as you enter," Tuci said on Tuscan TV, adding that the flames were so strong that he couldn't see anything.