California's first-in-the-nation statewide ban on plastic shopping bags was put on hold Tuesday when a trade group turned in enough signatures to place the issue before voters in 2016. The American Progressive Bag Alliance, which represents bag manufacturers, had about... 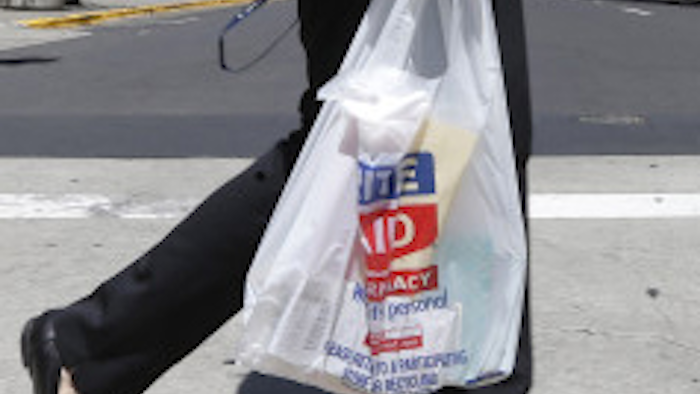 California's first-in-the-nation statewide ban on plastic shopping bags was put on hold Tuesday when a trade group turned in enough signatures to place the issue before voters in 2016.

The American Progressive Bag Alliance, which represents bag manufacturers, had about 50,000 more valid signatures than the 505,000 needed to qualify the referendum after a random sample of the signatures was tallied, said Bill Mabie, chief deputy for Secretary of State Alex Padilla.

The group had submitted more than 800,000 signatures at the end of last year.

Gov. Jerry Brown signed the bag ban last fall after one of the fiercest legislative battles of 2014, pitting bag-makers against environmentalists. It was scheduled to be phased in starting in July at large grocery stores and supermarkets as a way to cut down on litter and protect marine life.

The bag alliance said the ban will cost manufacturing jobs and boost profits for grocers, who can charge customers a premium for bags now given away for free.

"California voters will now have the chance to vote down a terrible law that, if implemented, would kill 2,000 local manufacturing jobs and funnel obscene profits to big grocers without any money going to a public purpose or environmental initiative," the group's executive director, Lee Califf, said in a news release.

Supporters of the ban criticized manufacturers for spending millions on the referendum campaign to continue selling single-use plastic bags.

"This is a cynical ploy by out-of-state interests desperate to delay a ban already adopted in more than 100 communities across California," Brown's spokesman Evan Westrup said.

Mark Murray, a spokesman for Californians vs. Big Plastic, said the coalition of environmental, labor, and business groups is confident California voters will uphold the ban. "It's not surprising that after spending more than $3.2 million, 98 percent of which is from out of state, the plastic bag industry has bought its way onto the California ballot to protect its profits," Murray said.

Under the legislation by Padilla, who was then a state senator, California was to begin pulling plastic bags out of checkout counters at large grocery stores such as Wal-Mart and Target this summer. The ban was scheduled to expand to convenience stores and pharmacies in 2016.

Padilla was elected in November as California secretary of state, whose office oversees the process to qualify initiatives for the ballot.

The law does not apply to bags used for fruits, vegetables or meats, or to shopping bags used at other retailers. It allows grocers to charge a fee of at least 10 cents for using paper bags.

To address concerns about job losses, the bill included $2 million in loans for plastic bag manufacturers to shift their operations to making reusable bags.

Environmental activists have successfully pushed plastic bag bans in cities across the U.S., including Chicago, Seattle and Austin, Texas. Hawaii also is on track to have a de facto statewide ban, with all counties approving prohibitions.

More than 100 cities and counties in California, including Los Angeles and San Francisco, already have such bans. Several other California local governments plan to move forward with their own bans as a result of the referendum, including San Diego, Santa Barbara County, Sacramento, Oceanside and American Canyon.