High-calorie sports drinks and candy bars will be removed from school vending machines and cafeteria lines as soon as next year, replaced with diet drinks, granola bars and other healthier items. The Agriculture Department said Thursday that for the first time it will make sure that all foods sold in the nation's 100,000 schools are healthier by expanding fat, calorie, sugar and sodium limits to almost everything sold during the school day. 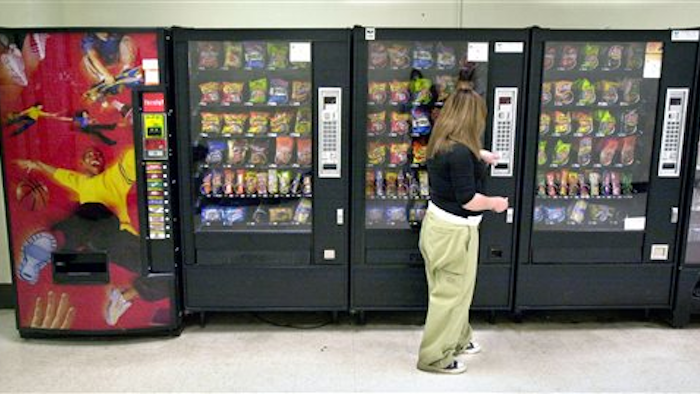 WASHINGTON (AP) — High-calorie sports drinks and candy bars will be removed from school vending machines and cafeteria lines as soon as next year, replaced with diet drinks, granola bars and other healthier items.

The Agriculture Department said Thursday that for the first time it will make sure that all foods sold in the nation's 100,000 schools are healthier by expanding fat, calorie, sugar and sodium limits to almost everything sold during the school day.

That includes snacks sold around the school and foods on the "a la carte" line in cafeterias, which never have been regulated before. The new rules, proposed in February and made final this week, also would allow states to regulate student bake sales.

The rules, required under a child nutrition law passed by Congress in 2010, are part of the government's effort to combat childhood obesity. The rules have the potential to transform what many children eat at school.

While some schools already have made improvements in their lunch menus and vending machine choices, others still are selling high-fat, high-calorie foods. Standards put into place at the beginning of the 2012 school year already regulate the nutritional content of free and low-cost school breakfasts and lunches that are subsidized by the federal government. However most lunchrooms also have the "a la carte" lines that sell other foods — often greasy foods like mozzarella sticks and nachos. Under the rules, those lines could offer healthier pizzas, low-fat hamburgers, fruit cups or yogurt, among other foods that meet the standards.

One of the biggest changes under the rules will be a near-ban on high-calorie sports drinks, which many beverage companies added to school vending machines to replace high-calorie sodas that they pulled in response to criticism from the public health community.

The rule would only allow sales in high schools of sodas and sports drinks that contain 60 calories or less in a 12-ounce serving, banning the highest-calorie versions of those beverages.

Many companies already have developed low-calorie sports drinks — Gatorade's G2, for example — and many diet teas and diet sodas are also available for sale.

First lady Michelle Obama, an advocate for healthy eating and efforts to reduce childhood obesity, pointed out that many working parents don't have control over what their kids eat when they're not at home.

"That's why as a mom myself, I am so excited that schools will now be offering healthier choices to students and reinforcing the work we do at home to help our kids stay healthy," Mrs. Obama said in a statement.

At a congressional hearing, a school nutritionist said Thursday that schools have had difficulty adjusting to the 2012 changes, and the new "a la carte" standards could also be a hardship.

Sandra Ford, president of the School Nutrition Association and director of food and nutrition services for a school district in Bradenton, Fla., said in prepared testimony that the healthier foods have been expensive and participation has declined since the standards went into effect. She also predicted that her school district could lose $975,000 a year under the new "a la carte" guidelines because they would have to eliminate many of the foods they currently sell.

"The new meal pattern requirements have significantly increased the expense of preparing school meals, at a time when food costs were already on the rise," she said.

Ford called on the USDA to permanently do away with the limits on grains and proteins, saying they hampered her school district's ability to serve sandwiches and salads with chicken on top that had proved popular with students.

The Government Accountability Office said it visited eight districts around the country and found that in most districts students were having trouble adjusting to some of the new foods, leading to increased food waste and decreased participation in the school lunch program.

However, the agency said in a report that most students spoke positively about eating healthier foods and predicted they will get used to the changes over time.

One principle of the new rules is not just to cut down on unhealthy foods but to increase the number of healthier foods sold. The standards encourage more whole grains, low-fat dairy, fruits, vegetables and lean proteins.

"It's not enough for it to be low in problem nutrients, it also has to provide positive nutritional benefits," says Margo Wootan, a nutrition lobbyist for the Center for Science in the Public Interest who has lobbied for the new rules. "There has to be some food in the food."

The new rules are the latest in a long list of changes designed to make foods served in schools more healthful and accessible. Nutritional guidelines for the subsidized lunches were revised last year and put in place last fall. The 2010 child nutrition law also provided more money for schools to serve free and reduced-cost lunches and required more meals to be served to hungry kids.

Last year's rules making main lunch fare more nutritious faced criticism from some conservatives, including some Republicans in Congress, who said the government shouldn't be telling kids what to eat. Mindful of that backlash, the Agriculture Department left one of the more controversial parts of the rule, the regulation of in-school fundraisers like bake sales, up to the states.

The new guidelines also would not apply to after-school concessions at school games or theater events, goodies brought from home for classroom celebrations, or anything students bring for their own personal consumption.

The USDA so far has shown a willingness to work with schools to resolve complaints that some new requirements are hard to meet. Last year, for example, the government temporarily relaxed some limits on meats and grains in subsidized lunches after school nutritionists said they weren't working.

The food industry has been onboard with many of the changes, and several companies worked with Congress on the child nutrition law three years ago.