At 60, Peeps More Popular Than Ever

As the storied candy brand celebrates its 60th anniversary this year, Peeps' first TV ad in a decade captures an essential truth about the spongy confection made of sugar, corn syrup and gelatin: Love them or hate them, people do all sorts of things with Peeps, only some of which involve giving them to kids at Easter. 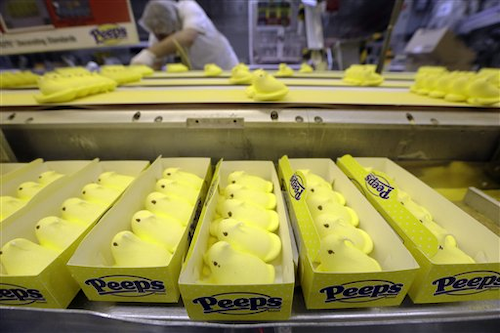 BETHLEHEM, Pa. (AP) -- It's Easter morning. A boy rouses his younger brother, and they run to the living room to find their baskets filled with — what else? — Peeps.

"Peeps are THE candy of Easter," the excited boy tells his wide-eyed sibling, who pops a yellow marshmallow chick in his mouth.

As the storied candy brand celebrates its 60th anniversary this year, Peeps' first TV ad in a decade captures an essential truth about the spongy confection made of sugar, corn syrup and gelatin: Love them or hate them, people do all sorts of things with Peeps, only some of which involve giving them to kids at Easter or eating them straight from the box.

And they're not shy about sharing.

"Everyone seems to have a Peeps story," says Ross Born, third-generation operator of Just Born Inc., which hatches 5 million Peeps a day at its plant 60 miles north of Philadelphia. "And they are free and willing to talk about how they eat their Peeps, how they cure them, how they store them, how they decorate with them. And these are adults!"

Just Born calls it the "Peepsonality" of consumers who buy Peeps not only to eat, but also to play around with.

"If you had asked me about this 25 years ago, I would've been rather bewildered about the whole thing," Born confesses. "We were candymakers."

Not that he's complaining. Just Born had its best year financially in 2012.

His grandfather, Russian immigrant Sam Born, started the candy company out of a Brooklyn storefront 90 years ago. Born advertised the freshness of his product with a sign that said "Just Born." The name stuck.

The burgeoning business moved to Bethlehem and acquired the Peeps brand with its 1953 purchase of Rodda Candy Co. of Lancaster. Best known for its jelly beans, Rodda had also introduced a small line of marshmallow chicks and bunnies, employing dozens of women who hand-squeezed them out of pastry bags. "It was really very difficult, and these women were strong," said David Shaffer, Sam Born's nephew and co-CEO along with Ross Born.

Ross's father, Bob Born — a physicist and engineer by training — automated the process in the mid-1950s, and a version of the machine he invented is still in use today, extruding millions of those familiar shapes on peak-Peep production days.

The company, whose other brands are Hot Tamales, Mike and Ike, and Goldenberg's Peanut Chews, has never suffered an unprofitable year. But its growth has always been relatively slow, steady and controlled, and a few years ago, Born and Shaffer decided they wanted to accelerate it.

The longtime partners brought in a new management team, spent heavily on marketing and broke back into the chocolate business, introducing chocolate-dipped Peeps as well as Peepsters, small chocolate candies filled with marshmallow-flavored cream. (New for this year is a yellow chick nestled in a hollow chocolate egg.) They also focused on holiday seasons other than Easter, particularly Christmas.

The result: Shaffer says last year was "off the charts." While Just Born is privately held and does not disclose revenue, he says it posted double-digit growth across all brands. And Shaffer sees more growth potential as the confectioner works to position its products in warehouse clubs and convenience stores.

Just Born certainly benefits from being part of a $33 billion candy industry that is seen as basically recession-proof, offering an inexpensive indulgence during tough economic times.

"Candy did not seem to take the hit that some other industries faced in recent years. We think a big reason for that is candy's place in our hearts and minds," says Susan Whiteside of the National Confectioners Association, a trade group.

Long associated with Easter, Peeps have penetrated the pop-culture consciousness in a way that other candy brands have not.

Aficionados send chicks into battle in a microwave "sport" known as Peeps jousting. They enter Peeps art contests, dozens of which are held around the country this time of year. They innovate recipes like "Peepza," a desert pizza. They write cheeky blog entries with titles like "101 Fun Ways to Torture a Peep."

While the company churns out more than 1 billion Peeps this Easter season — a record — it sees the 60th anniversary as another marketing opportunity and a chance to connect with its fans. In addition to the TV ad campaign, it's ramping up social media promoting a Facebook survey that asks knowing questions like this one: Do you like your Peeps fresh, frozen, or "aged to perfection"?

So which is it, Ross Born? Fresh or stale?

"There's a lot of gray area here," Born says diplomatically. "There are people who tell me they put a one-inch slice in the film (that seals the box), and they'll lay it on top of their refrigerator for two days. No more, no less. Then they are PERFECT to eat.

"So it's not necessarily stale, it's just a little firmer. All right? It's just like politics," says Just Born's commander-in-Peep. "You've got people way on one side, and way on the other side, but there are a whole lot of people in the middle."