Horse A Hidden Ingredient In Many European Foods

Daily revelations from an ever-increasing menu of supermarket, catering and restaurant goods have taught the world one lesson: When minced up with other meat or slathered with spices, consumers cannot tell equine from bovine in the food chain. European horse has yet to be detected in any American-sold products. 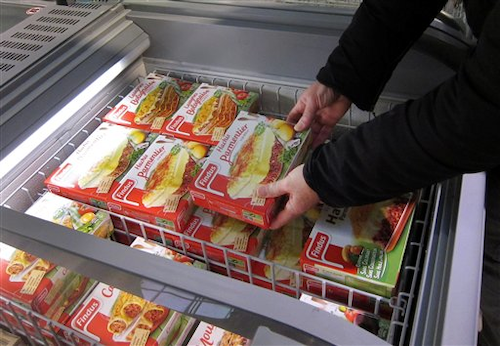 DUBLIN (AP) -- So hungry you could eat a horse? Chances are, if you've regularly consumed processed-meat products in Europe, you already have.

Since Ireland published surprise DNA results on Jan. 15 showing that a third of frozen "beef" burgers in Ireland contained at least a trace of horse, food scientists in more than a dozen countries have found the animal trotting into products where it was never meant to roam.

Daily revelations from an ever-increasing menu of supermarket, catering and restaurant goods have taught the world one lesson: When minced up with other meat or slathered with spices, consumers cannot tell equine from bovine in the food chain. European horse has yet to be detected in any American-sold products.

In fairness, IKEA never did call them beef balls. The Swedish furniture giant has discovered that its signature cafeteria dish — spiced meatballs of mixed beef and pork — also might contain horse.

IKEA was keen to stress that its U.S.-based meatballs were all-American and not subject to recall.

There's something rotten in Denmark, but it's not the meat itself. The Danish Veterinary and Food Administration says a product enigmatically described as "pizza meat" and sold by the Harby Slagtehus meat wholesaler contains cow, pig and horse. The company insists its customers in pizzerias across Denmark knew the topping contained horse, even if that little fact was nowhere on the ingredients list. Government vets don't believe a word of that.

Better make that "bolo-neighs." Many of Europe's leading makers of microwaveable frozen foods — including Birds Eye of Britain, Nestle of Switzerland, and Findus of France — found that some suppliers had mixed horse into the ground beef used for Europe's most ubiquitous pasta sauce.

Not to beat a dead horse, but Europe's food-testing labs are indicating that any factory-made pasta product containing "beef" sauce or filling might be horse in drag. Among those caught at the DNA finish line are the frozen "beef" lasagnas of Birds Eye; Nestle's Buitoni brand of ravioli in Italy and fusilli in Spain; and Combino-branded tortelloni and penne in Austria. France's Comigel blamed the discovery of up to 100 percent horse in its "beef" lasagnas — sold under other brand names, including Findus and Tesco — on a complex supply chain stretching from its Luxembourg factory back via Dutch and Cypriot middlemen to Romania horse butchers.

Thank goodness there's no such thing (yet) as a beef doughnut. In Spain, Nestle's recall of products includes meat-filled, semicircular pastries called empanadas.

You might be surprised to find horse meat hiding under a frilly layer of potato. British-style cottage pies, with gravy, beef and carrots under the smashed spuds, have been withdrawn from scores of school cafeterias in England, Wales and Scotland after DNA tests found horse meat inside. France made similar discoveries in its potato-topped pie called hachis Parmentier.

Mom might tell you to eat your vegetables, but the Nestle product recall in Spain included meat-stuffed peppers.

Once you've blended a handful of meats, does one more really matter? The Austrians found horse in kebab meat produced by a Vienna firm, Lilla Gastronomie, that was supposed to contain a blend of only beef, pork and turkey.

Fry 'er up: Despite sausages' worldwide reputation as a favored destination for mystery meat, only Austria has found equine DNA hiding in sausages, in two brands made by Josef Freitag, aka "Joe Friday."