In the simplistic narrative of U.S. presidential politics, China is a Hollywood villain, a monetary cheat that is stealing American jobs. But the one-dimensional caricature offered up by President Barack Obama and Republican challenger Mitt Romney obscures the crucial reality of U.S.-China relations: For all the talk about getting tough on Beijing, the U.S. and China are deeply entwined. 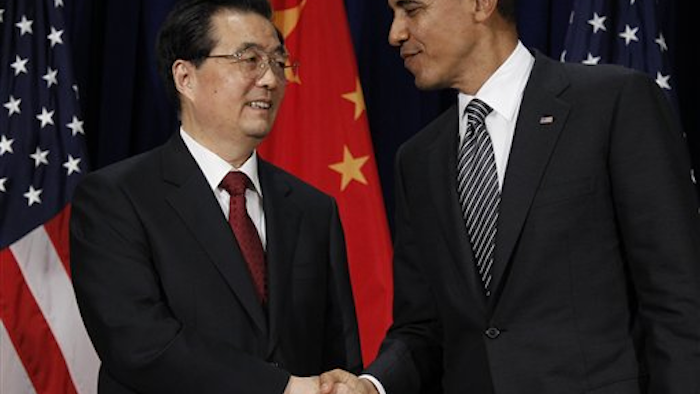 BEIJING (AP) -- In the simplistic narrative of U.S. presidential politics, China is a Hollywood villain, a monetary cheat that is stealing American jobs.

But the one-dimensional caricature offered up by President Barack Obama and Republican challenger Mitt Romney obscures the crucial reality of U.S.-China relations: For all the talk about getting tough on Beijing, the U.S. and China are deeply entwined, defying easy solutions to the friction and troubles that beset their relations.

The two countries are the first and second largest economies in the world, doing nearly a half-trillion dollars in trade which in turn buoys the global economy. Their governments are in constant contact on North Korea's and Iran's nuclear programs and Syria's civil war and are trying to work out rules of the road for their huge militaries and such 21st century problems as cyberwarfare.

Few relationships are as critical to the world today. Managing the competition for global influence between the world's superpower and its still-rising rival so that it does not become outright confrontation will be a priority for whoever wins next month's presidential election.

Little of the enormity and importance of U.S.-China ties found its way into Tuesday night's debate between Obama and Romney. Instead, the candidates used it as a convenient foil for their campaign positions about revitalizing the U.S. economy and getting Americans back to work.

Both candidates sought to portray China as vacuuming up American jobs. Their arguments contained half-truths and flaws.

Romney said excessive regulation and misguided policies during Obama's first term drained away American jobs, turning China into "the largest manufacturer in the world." Obama said Romney, through his work for private equity and investment firm Bain Capital, bore responsibility by investing in companies that moved jobs to China.

The title of No. 1 manufacturer is a matter of dispute. The research firm IHS Global Insight said last year that China overtook the United States in 2010, with total output of $1.995 trillion, compared with $1.952 trillion for the U.S. The National Association of Manufacturers disputed that, saying the United States still was in the lead and IHS Global Insight's figures were distorted by changes in exchange rates and other factors.

Left unsaid by both candidates: That if low-cost manufacturing jobs don't go to China, they'll go somewhere else. Think Mexico.

Obama, for his part, said his focus on doubling U.S. exports is "creating tens of thousands of jobs all across the country." But one concrete example he cited in getting tough on China — slapping levies on imports of low-priced Chinese-made tires that he said saved 1,000 jobs — had mixed results.

Economists at the Peterson Institute for International Economics in Washington have said that some 1,200 jobs might have been preserved, but that the cost amounted to $1.1 billion in higher prices paid by American consumers — or $900,000 per job. Whether the outcome was good or bad for Americans is a matter of perspective.

Nor did they point out that in an era of globalized business, an Apple iPhone created in America and assembled in China helps both, as well as component suppliers in Japan, Germany and South Korea.

True, China has used its mix of free-market, state-directed economic policies to support Chinese business to the disadvantage of foreign competitors. Romney came closest to hitting that mark, ticking off China's rampant theft of intellectual property and other trade secrets as well as policies that help hold down the value of its currency, the yuan, thereby keeping low the price of Chinese exports.

Yet Romney's campaign promise — repeated in the debate — that he would brand China a currency manipulator on his first day in office may merely be symbolic. The act does not require immediate punitive measures, and while economists estimate the yuan is still undervalued, it has appreciated markedly, as Obama said.

And applying that label may be counterproductive if Beijing retaliates. On cue, China's government news agency, Xinhua, soon after the debate warned that China "perhaps would be forced to fight back," sparking a global trade war. One Romney supporter in the business community, former American International Group Inc. chairman Maurice Greenberg, told Bloomberg Television last week that the candidate is unlikely to follow through with the promise if elected.

Lost in the back-and-forth is any defense of U.S.-China relations as a whole, and how the candidates would handle the challenges China's burgeoning economic, diplomatic and military might pose to U.S. pre-eminence.

For much of the past two decades, presidential candidates have bashed China on the campaign trail and taken a tough line once in office only to find that global trade and hotspots require engaging Beijing. The Chinese government has reminded its people of that pattern in state media reporting on the election.

Four years ago, Obama attempted to break with the past by trying to treat China as a partner in solving global issues: the Great Recession, climate change and nuclear proliferation. He was rebuffed by Beijing, which took the overture as a sign of declining American power. Re-tacking, Obama has begun diverting more naval and other military resources to Asia, shoring up longstanding alliances from Japan to Australia and building a new one with Vietnam.

Beijing views the current policy as hedged containment and sees Washington's hand behind current territorial disputes over remote islands with the Philippines and Japan. Senior U.S. and Chinese analysts have warned of a deepening distrust between Washington and Beijing that has the potential to impede solutions to conflict in the Middle East, better managing the global economy and other world problems.

If the candidates have answers to that predicament, they did not say. Their final debate on foreign policy — and a chance to make the case for constructive U.S.-China relations — takes place next week.