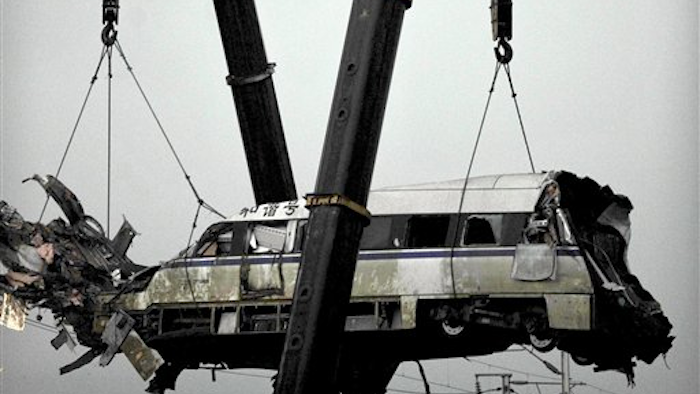 A former railway minister was among 54 officials found responsible for the crash, a Cabinet statement said Wednesday. Several were ordered dismissed from Communist Party posts but there was no word of possible criminal penalties.

The crash report was highly anticipated. The disaster near the southern city of Wenzhou also injured 177 people and had triggered criticism over the high cost and dangers of the bullet train system, a prestige project that once enjoyed lofty status on a level with China's manned space program.

Regulations had required the report to be released by Nov. 20. When that date passed, the government offered little explanation, drawing renewed criticism by state media, which have been unusually skeptical about the handling of the accident and the investigation.

The Cabinet statement cited "serious design flaws and major safety risks" and what it said were a string of errors in equipment procurement and management. It also criticized the Railways Ministry's rescue efforts.

The report affirmed earlier government statements that a lightning strike caused one bullet train to stall and then a sensor failure and missteps by train controllers allowed a second train to keep moving on the same track and slam into it.

Those singled out for blame included former Minister of Railways Liu Zhijun, a bullet train booster who was detained in February amid a graft investigation. Also criticized was the general manager of the company that manufactured the signal, who died of a heart attack while talking to investigators in August.

The decision to assign blame to one figure who already has been jailed and another who is dead, along with mid-level managers who have been fired, suggests further political fallout will be limited.

Several officials including a former Communist Party secretary of the Shanghai Railway Bureau were ordered dismissed from their party posts, a penalty that is likely to end their career advancement. Others received official reprimands but there was no mention of possible criminal charges.

The bullet train, based on German and Japanese systems, is one facet of far-reaching government technology ambitions that call for developing a civilian jetliner, a Chinese mobile phone standard and advances in areas from nuclear power to genetics.

The bullet train system quickly grew to be the world's biggest but has suffered embarrassing setbacks. After the Wenzhou crash, 54 trains used on the Beijing-to-Shanghai line were recalled for repairs following delays caused by equipment failures.

Critics complain authorities have spent too much on high-speed lines while failing to invest enough in expanding cheaper, slower routes to serve China's poor majority.

Beijing is rapidly expanding China's 56,000-mile (91,000-kilometer) rail network, which is overloaded with passengers and cargo. But it has scaled back plans amid concern about whether the railway ministry can repay its mounting debts.

On Friday, the current railways minister, Sheng Guangzu, announced railway construction spending next year will be cut to about 400 billion yuan ($65 billion), down from this year's projected 469 billion yuan ($75 billion).

A failure to expand rail capacity could choke economic growth because exporters away from China's coast rely on rail to get goods to ports.

The rail ministry's reported debt is 2 trillion yuan ($300 billion). Analysts say its revenues are insufficient to repay that. That has prompted concern the ministry might need to be bailed out by Chinese taxpayers.