When 17-year-old Trayvon Martin was shot, he happened to be carrying a bag of Skittles, thrusting the brand into the spotlight, for better or worse. 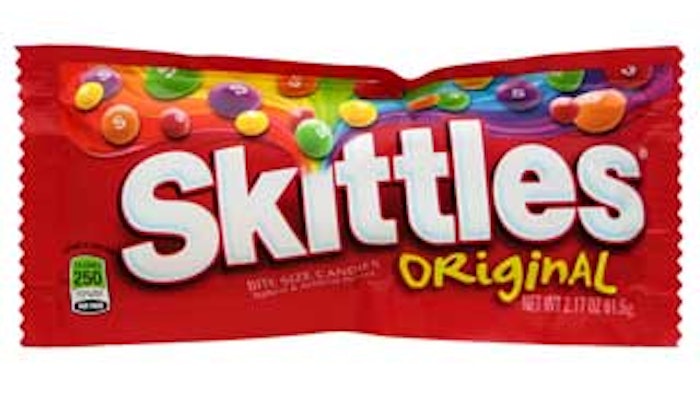 NEW YORK (AP) — It could've been Starbursts, Twizzlers or Sour Patch Kids. But when Trayvon Martin was fatally shot, he happened to be carrying a bag of Skittles.

The 17-year-old's death at the hands of a neighborhood watchman in February ignited nationwide protests and heated debate about racial profiling and "Stand Your Ground" laws.

For Mars Inc., the privately held company that owns Skittles, the tragedy presents another, more surreal dimension. Protestors carried bags of the chewy fruit-flavored candy while marching for the arrest of shooter George Zimmerman. Mourners pinned the bright red wrappers to their hooded sweatshirts at memorial services.

On eBay, vendors sell $10 T-shirts with the words "Justice for Trayvon Martin" printed over a cartoon-like rainbow of pouring Skittles.

Wm. Wrigley Jr. Company —the unit of Mars that owns Skittles— issued only a brief statement offering condolences to Martin's friends and family, adding that it would be inappropriate to comment further "as we would never wish for our actions to be perceived as an attempt of commercial gain."

Skittles isn't the first popular food brand to find itself at the center of a major controversy. The terms "the Twinkie defense" and "don't drink the Kool-Aid" became part of the vernacular decades ago in the wake of tragic events. More recently, Doritos made headlines when it was reported that the corn chips were Saddam Hussein's favorite snack.

The cases show how millions of advertising and marketing dollars can be rendered powerless when a company's product is swept into a big news story. Hostess Brands Inc., which owns Twinkies, says it does not have any archival information on how it handled the popularization of the term "the Twinkie defense." The phrase was used derisively by the media during the trial of Dan White, who fatally shot San Francisco Mayor George Moscone and city supervisor Harvey Milk in 1978. White's lawyers cited his poor eating habits as a sign of his depressed state.

As for "don't drink the Kool-Aid," younger generations may not realize the phrase has its origins in the 1978 mass suicide in Jonestown, Guyana, where Reverend Jim Jones led more than 900 members of the Peoples Temple to drink a grape flavored drink laced with cyanide.

The powdered mix used to make the concoction was actually the lesser known Flavor Aid. Even so, executives at Kraft Foods Inc., which owns Kool-Aid, decided to let the matter go, rather than set the record straight.

"It would be like spitting into the wind at this point — it's just part of the national lexicon," says Bridget MacConnell, a Kraft spokeswoman. "We all try to protect the value of our brands. But this one just kind of got away from us. I don't think there was any way to fight it."

MacConnell added that Kool-Aid remains a popular drink and that the Jonestown tragedy has not overshadowed the brand.

In 2005, Doritos became fodder for late night comedians when it was reported that Saddam Hussein loved the chips. A U.S. military guard quoted in a GQ magazine story said the deposed Iraqi dictator originally obsessed over Cheetos and got "grumpy" whenever guards ran out of the finger-staining treats. Saddam forgot about Cheetos only after guards gave him Doritos as a substitute one day.

"He'd eat a family size bag of Doritos in 10 minutes," the guard said.

A spokesman for PepsiCo Inc., which owns Frito-Lay, says the matter was a "non-issue" for the company.

Although it didn't get as much attention, the article also noted Saddam preferred Raisin Bran Crunch for breakfast, telling a guard, "No Froot Loops."

As difficult as it may be for companies to weather controversy, the uncomfortable attention doesn't spell the end of a product. Hostess and Kraft say they don't have information on whether the "Twinkie" and "Kool-Aid" catch-phrases had an impact on sales. But both brands clearly survived.

Wm. Wrigley Jr. Company declined to say whether the Martin case has had an impact on Skittles sales. Even so, it is one of the most popular candies in the U.S. Sales grew 7 percent over the past year to $213.8 million, according to SymphonyIRI, a Chicago-based market research firm that tracks sales at supermarkets, drug stores and mass merchandise outlets, excluding Walmart.

The best approach for companies is to maintain a low profile, says Katherine Sredl, an assistant professor of marketing at the University of Notre Dame's Mendoza College of Business. That's particularly true in the Martin case, where any action by Mars could be interpreted as insincere or opportunistic.

Fate can swing in the other direction too, of course. Companies can become the beneficiaries of unexpected positive press, usually when celebrities are spotted consuming their products without being paid for an endorsement.

Last winter, Skittles basked in exactly that type of exposure when NFL star Marshawn Lynch was shown scarfing down a bag of the candy on the sideline after a touchdown. Lynch, a running back for the Seattle Seahawks, explained it was a tradition he started with his mother in high school. Fans started throwing Skittlesat Seahawks games.

In that scenario, Mars was quick to step forward and capitalize on the opportunity. The McLean, Va.-based company gave Lynch a free two-year supply as well as a custom-made Skittles dispenser for his locker.

Despite becoming ensnared in the Martin case a few months later, Mars may ultimately benefit from the tragedy, says Sredl, the marketing professor. The many people who see Martin as an innocent victim might buy the candy in solidarity or an act of protest, she says.

That's why the candy became such a vivid detail in the Martin case. In the public imagination, it underscored that the teenager was "just a kid walking down the street eating Skittles," Sredl says.

Perhaps more importantly, Skittles has become a part of the public discourse, she says. And that's always good for a company.