Baxter’s ability to work side by side with human counterparts has many people worried.  What if he and his robotic buddies stop dancing and take over all the manufacturing jobs?  What if people – and the wonderful human qualities they bring to manufacturing – become passé? 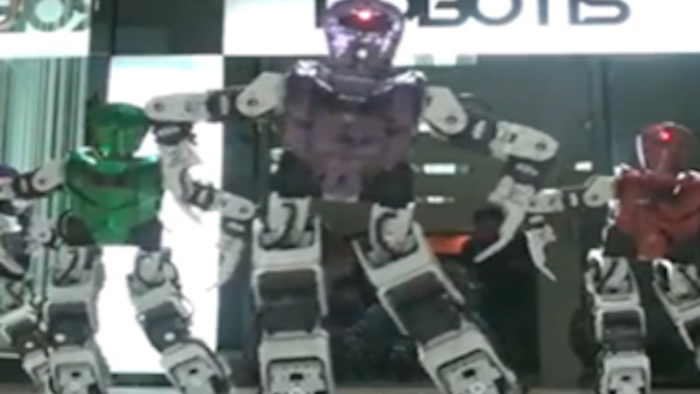 Rethink Robotics, the firm that designed and manufactured Baxter the famous industrial robot, has met its match. Robotis’ Bioloid, an educational DIY robotics set, has developed a new, hipper cousin to Baxter that dances – Gangnam Style.  And no wonder. Baxter is a “serious robot” who has a job at Vanguard Plastics, a Connecticut manufacturer. He doesn’t have time to goof off.

But Baxter’s ability to work side by side with human counterparts has many people worried.  What if he and his robotic buddies stop dancing and take over all the manufacturing jobs?  What if people – and the wonderful human qualities they bring to manufacturing – become passé?

In last fall’s MIT Technology Review[1] Rodney Brooks, the CEO of Rethink Robotics and Baxter’s “father”, said he believes that the advent of sophisticated manufacturing automation will serve  humans by making them more efficient, not replace them.

There are over one million robots engaged in work around the world, says the International Federation of Robotics, and approximately 80 percent of car manufacturing is now conducted through automation.  And both small and large manufacturers can take advantage of automation, using machines that cost as little as $1,000 for a 3D printer, or sophisticated machines like Baxter that cost much more (Baxter costs $22,000).

Think how exciting it would be, says Julie Shah, an assistant professor of aeronautics and astronautics at MIT, who studies the role of robots in manufacturing “if you [could] develop a robot that’s capable of integrating into the human workflow, into the human part of the factory—if it has just a little bit of decision-making ability, a little bit of flexibility—that opens up a new type of manufacturing process.”[2]

Counter to any apocalyptic thinking about manufacturing and human obsolescence, manufacturing jobs have been growing in the last few years,[3] and improving, as new types of automation are introduced through nano-manufacturing, electronics, energy efficiency and bioscience. These new jobs require higher skills than the “old” manufacturing jobs and no matter how smart the robots, the employees will continue to be critical to operational success. For instance, on March 26, The Smart Manufacturing Leadership Coalition announced it won $10 million in funding from the U.S. Dept. of Energy Office of Energy Efficiency & Renewable Energy’s Advanced Manufacturing Program. The project will “transform industrial productivity and energize a new era of innovation by empowering manufacturers with real-time, plant-wide workflow intelligence needed to deliver higher levels of game-changing competitiveness,” said Dean Bartles of General Dynamics. “Smart Manufacturing infrastructures and approaches will also let operators make real-time use of ‘big data’ flows from fully-instrumented plants to improve safety, environmental impact and energy, water and materials use.” [4]   Without the automation such as this, good decisions driven by data will be harder to come by.  But without people, decision-making would be impossible. Of course, sometimes robots look and act like people, to wit PETMAN, designed for testing chemical protection clothing.  Luckily PETMAN is only as good as his human programmers.

Several MEP centers work with manufacturers who use robotics in their manufacturing operations. One is Advantage Kentucky Alliance. They have one client using robotic waterjets, and another searching for a robot that would explode unexploded ordnance.

At the Colorado Association for Manufacturing and Technology (CAMT), their client, Wolf Robotics, turned to CAMT for strategic support in continuing their growth trajectory, helping them with structured innovation technologies.

And at MMTC, they assisted Dokka (who was already using the latest robotic automation) to fine tune their machinery installation and establish an 18-month strategic plan.

Sometimes I wonder if my own job would be better if I shared some duties with a robot. That way, I could spend time dancing, gangnam style.  For more information about robotics or automation, visit the NIST webpage or the NIST MEP closest to you.