UPS May Be Changing The Supply Chain World

Over a hundred planes fly into Louisville International Airport every night and unload at Worldport, which is on the airport grounds. Packages are sorted and reloaded before the planes return to their respective cities, and all of this happens within a matter of a few hours. 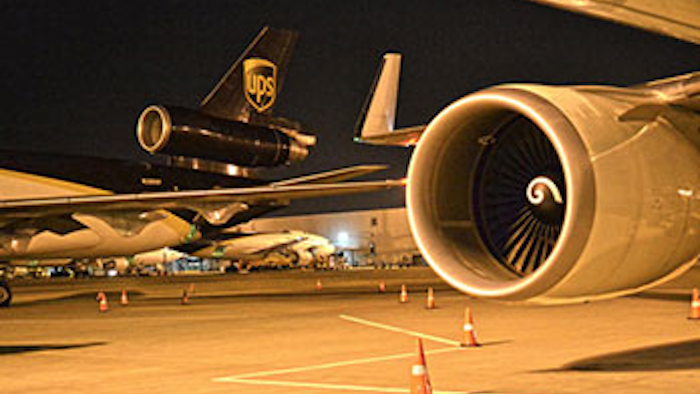 UPS recently gave me a tour of the company’s 5.2 million square foot Worldport facility in Louisville, KY. This overnight shipping/sorting facility accepts, sorts, and reloads at a rate of 416,000 packages per hour (that’s 115 packages a second). With over 130 aircraft and an average of 1.6 million packages traveling through Worldport on a daily basis, this facility is not just a massive (and efficient) mailroom, it is a wonder of contemporary automation.

Over a hundred planes fly into Louisville International Airport every night and unload at Worldport, which is on the airport grounds. Packages are sorted and reloaded before the planes return to their respective cities, and all of this happens within a matter of a few hours.

Since the facility does most of its operations at night, I found myself on an airport runway at about 1:30 in the morning. The sheer size of the UPS operation makes itself known at this hour, as planes land within just minutes of each other (sometimes less).

Inside Worldport, UPS employees are hard at work dragging cargo bins over more than 1.2 million casters-and-ball transfer units, emptying packages onto a 155-mile serpentine of conveyors, and scanning every package multiple times in 546 camera tunnels.

Much of the onsite staff at Worldport consists of students from the local college and tech school, to whom UPS provides a tuition support program for working the graveyard shift for $10 an hour.

While Worldport in and of itself is an impressive spectacle, UPS showed another side to the brown box company’s repertoire that many are still unaware exists. Despite UPS’s past “We (Heart) Logistics” campaign, most relegate the company to the delivery of packages via brown trucks.

Just a couple miles up the road from Louisville International Airport (and Worldport) sits the UPS SCS (Supply Chain Solutions) facility. This is where the real magic of UPS’s delivery legacy and supply chain innovation meld into a logistics behemoth.

Within the walls of the buildings at the Louisville campus (UPS has several campuses worldwide), UPS gathers, sorts, warehouses, picks, and ships components for several different corporations and industries. The eight-building location is known as the Louisville Technology and Logistics Center, and everything from Smart Boards for classrooms to human tissue is organized and shipped from the Kentucky location.

This facility brings to light a powerful solution that UPS has managed to capitalize on within almost every industry. The company facilitates both warehouse space, staff, and shipping capabilities to ease supply chain concerns for many companies. UPS even has a facility that supports a major aerospace engine manufacturer – sourcing both proprietary and third-party components, picking, kitting, and shipping directly to the manufacturing/assembly facilities.

At first glance/mention, these facilities seem like they may have a painful ROI for the companies using the services, but after a walk through the warehouses, UPS proves that they really do love logistics. The facilities (at least the ones I toured) seem extremely modular and yet, they are catered to the individual businesses they are servicing.

Beyond the enormity and impressive speeds of both these facilities, I can’t shake the feeling that UPS’s SCS facilities are an allusion, if not an absolutely integral concept, to the supply chain of the future.