Although Boulevard Brewing Co.’s product range, distribution and legacy has grown since the 1989 founding of the company, the used equipment that started the company remained largely unchanged until recently when the company adopted a new palletizing solution. 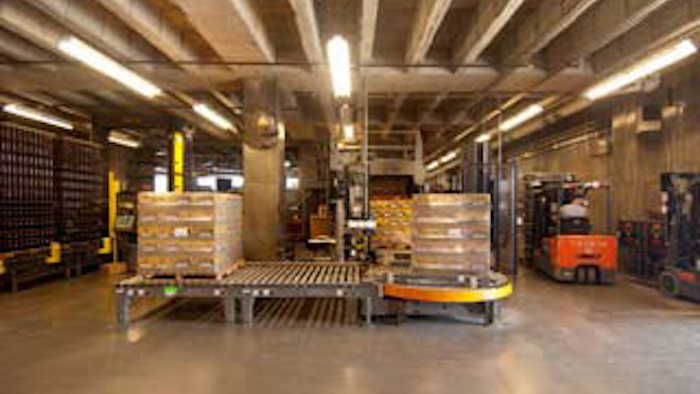 The Company: A Homebrewed Beginning

Soon, McDonald’s homebrewing operation grew into a more serious business. With an entrepreneurial mindset, McDonald secured capital investment, purchased a vintage Bavarian brewhouse and launched his company. Over the next 20 years, Boulevard Brewing Co. expanded its distribution from across town to across the country, delivering its beer, distinctive for its Midwest flavor profile, to 19 states.

The Challenge: A Microbrew with Major Appeal Outgrows Its Equipment

Although Boulevard’s product range, distribution and legacy has grown since the 1989 founding of the company, the used equipment that started the company remained largely unchanged until recently.

“We had taken the vintage equipment that started the company as far as it could go,” said Mike Utz, plant engineer, Boulevard Brewing. “The entire line needed to be revamped, and we knew that a proactive investment in our line was necessary to keep us competitive.”

In 2006, the company determined that they had outgrown their existing facility and infrastructure and began planning a new three-story building adjacent to the original building. The new, 150-barrel brewhouse would increase production while retaining the company’s legacy of quality, taste and craftsmanship.

The line would also handle a packaging challenge: automation of the closing of its signature closed-style cartons. Closing the cartons reduces light exposure, extending the shelf life of the product and allowing for increased distribution, while also addressing safety concerns with tamper evident packaging.

Significant upgrades were also planned for the end-offline process in the new building. Boulevard needed to relieve the bottleneck created by manually palletizing cases of beer. With 11 workers on the floor, the facility produced about 300 bottles per minute. Three workers alternated the manual end-of-line palletizing, stacking cases weighing up to 30 pounds each at a rate of 12 cases per minute. It was clear that the existing backbreaking, repetitive labor process would not be able to keep up with the efficiency gains of the rest of the line.

Boulevard planned to install a state-of-the-art, $6-million bottling line in 2008. The project’s budget was calculated based on payback for the increased efficiency and throughput rate of the new line. “While we knew what we would gain from the automation of the process, we viewed this project more in terms of how we are investing in our future,” said Utz.

Finding a Palletizing Partner with a Robust Reputation

Utz began his search for a palletizer by looking at the premium standard for the brewing industry, a machine that would stand up to the brewery use and abuse.He only had to look across the state to Intelligrated, located in nearby St. Louis, Mo., the manufacturer and integrator of Alvey® palletizers. With a 60-year legacy in palletizing and deep roots in the brewing industry, the Alvey brand name was recommended to Utz during his research.

“It’s well known in our industry that Alvey machines are stout,” said Utz. “They are rugged machines, and the fact that they are manufactured in America, right here in Missouri, was a big plus. We didn’t want to import something from halfway around the world.” The project was put on a fast-paced schedule for an August 2009 completion, before fall store deliveries began.

The Solution: Gentle Handling with a Compact Footprint

The most prominent concern when palletizing cases of glass bottles is the machine’s ability to move and configure cases without shattering the product. Compounding this issue is the trend of bottle thinning, where glass thickness is decreased for both cost and environmental issues. With no corrugated partitions and progressively weaker glass, Boulevard knew that gentle manipulation of product would be a top priority.

Another concern the brewery had was space constraints within the facility. Located in an urban, completely developed area just south of downtown, the new facility had a limited footprint to build on, and every piece of equipment needed to be compact, functional and efficient in both its use of space and process.

Intelligrated recommended the Alvey 780 midspeed palletizer for maximizing space efficiency and for gentle product handling. Particularly suited for single-line applications in the beverage industry and capable of rates of 50 cases per minute, the Alvey 780 provided the mid-speed rates that Boulevard needed.

Additionally, with a 90-degree angle of the infeed conveyor, the Alvey 780 ensured the most compact footprint for the tight configuration of the facility. Intelligrated also designed the palletizing cell to take advantage of dual-purpose functionality, where only one operator manages all functions of both the palletizing and depalletizing process.

Cases containing glass bottles in six-pack, 12-pack and 20-pack configurations, as well as a 24-pack case of aluminum bottles, are conveyed to the high-level infeed of the Alvey 780 palletizer. After each layer of cases is placed on the pallet, the pallet lowers one layer. When the pallet is filled, it discharges from the machine at floor level via a full pallet conveyor provided by Intelligrated. Full pallets are conveyed along Intelligrated chain-driven live roller full pallet conveyor to a Lantech Q-series semi-automatic turntable and stretchwrapper, also provided by Intelligrated.

Since coming online, the palletizer has surpassed expectations. The entire operation has moved from 11 workers running a maximum of 300 bottles per minute to five workers bottling 500 bottles per minute. A total of 25 to 30 cases are palletized by the Alvey 780 per minute, a 100 percent increase over Boulevard’s previous manual palletizing methods. The line is capable of brewery growth, with the capacity to quadruple the current operational capacity.

It can also provide Boulevard with the ability to add second or third shifts if needed, or new patterns for future products. With a changeover rate of 15 minutes or less, the Alvey 780 is ready for new product before the brewing line has been rinsed and converted over, a process that can take over two hours.

“The benefits we’ve received from the new Alvey palletizer have been remarkable,” concluded Utz. “Intelligrated’s Alvey palletizer truly is a stout machine that will carry Boulevard into the next 20 years of our business, and beyond.”