What’s behind this trend, and how can U.S. processors benefit? Milk and cheese are relatively new to the Chinese diet, says Todd Shilk, dairy category manager at Tetra Pak U.S. and Canada, but consumers’ taste for them is growing. 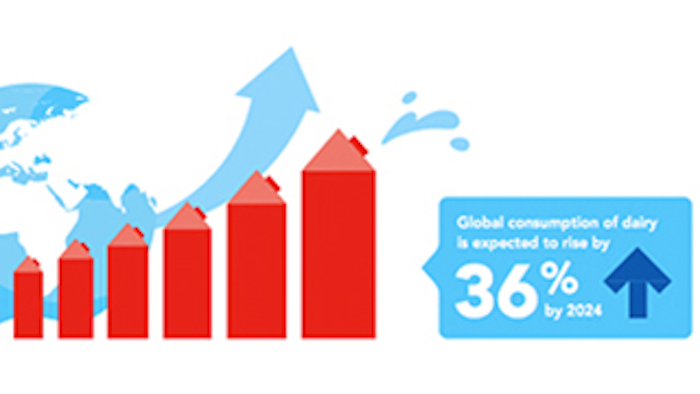 What happens when 1.36 billion people in China migrate toward cities, draw middle-class wages and shift toward ‘Western’ foods like ice cream, cheese pizza and strawberry-flavored milk? One result: larger profits for U.S. dairy processors, who, like dairy exporters in other countries, are charging record prices for their products at home and abroad, according to Bloomberg News.

China’s growing thirst for milk helped push American dairy exports to a record $6.7 billion in 2013, according to the U.S. Dairy Export Council (USDEC). January U.S. dairy exports were 35 percent higher than a year earlier, putting the month’s exports ahead of the staggering 30 percent annual growth Bloomberg News reported in 2013.

According to the 2014 Tetra Pak Dairy Index, China is just one plane of opportunity. The $3.69 price tag on the average gallon of whole milk sold in April 2014 is 7.5 percent more than just a year before, the highest since September 2011. In just three years, when Tetra Pak’s research predicts global dairy demand will overtake production, prices could be even loftier—especially in China, the world’s top dairy importer.

This does not mean all is rosy with U.S. dairy exports; sales to China declined 24 percent during August. However, year-to-date (January-August) exports by volume for 2014 are still 21 percent greater than last year, prices remain high, and there are still reasons to retain a positive long view.

What’s behind this trend, and how can U.S. processors benefit? Milk and cheese are relatively new to the Chinese diet, says Todd Shilk, dairy category manager at Tetra Pak U.S. and Canada, but consumers’ taste for them is growing. A wave of Western culture has swept into the country, bringing with it dairy-based foods. Baskin-Robbins and Pizza Hut have ambitious Chinese expansion plans; drinking milk is increasingly viewed as healthy–especially for kids–and has caught on with an increasingly affluent middle class.

Tetra Pak research shows most liquid milk consumed in China (76 percent) is ultra-high temperature (UHT) treated, which holds advantages over traditional pasteurization. When pasteurized traditionally, dairy products are heated then packaged. This milk must be continuously refrigerated and still has a brief shelf life (5-15 days).

UHT dairy products are briefly heated to high temperatures then filled into aseptic, shelf-stable cartons, lasting up to a year without refrigeration or preservatives. Traditionally, most milk exports to Asia have been powder; over the past 15 years, however, UHT milk exports have grown steadily and should continue to climb by 3.1 percent CAGR from 2013 to 2016, according to the Dairy Index.

UHT milk suits China’s transport infrastructure, which cannot support quick delivery of chilled dairy. And Chinese consumption of UHT milk jumped from 18 million pounds in 2010 to about 331 million pounds in 2013. The USDEC suggests this could quadruple again to 1.3 billion pounds by 2020. UHT milk also empowers use of renewable packaging materials and offers lighter weight and independence from refrigeration. This type of packaging delivers benefits throughout the supply chain.

“The U.S. industry produces large volumes of UHT-treated milk annually, yet we have played only a minor role in serving booming Chinese consumption,” he says. “Chinese buyers have expressed growing interest in U.S. supply to meet spiraling demand.”

Meanwhile, in the U.S., fluid milk consumption continues a decades-long slide. Bright spots include value-added innovations, like flavored, organic and nutraceutical products. Last year, American milk sales were the lowest since 1984; culprits include fewer people eating breakfast (when more than half of fluid milk in the U.S. is consumed) at home. Less than 50 percent of adults now drink milk; whole-milk consumption is half what it was 30 years ago.

U.S. dairy producers should still focus on opportunities in their homeland. Dairy innovation could likely abate the slide in consumption here. As novel milk flavors grabbed Chinese consumers and pushed sales up in that country; similar innovations could work magic in the U.S.

The Tetra Pak Dairy Index shows the globe is dotted with areas of opportunity, especially in developing areas. U.S. export sales to Mexico, for example, increased 18 percent in August. Most U.S. producers, however, are targeting China where exports were up 21 percent in the first half of 2014 compared with a year ago and prices are high.

Expansion in Chinese dairy production can’t keep up with demand, Shilk says, adding dairy production there likely will continue lagging for years to come. Eventually, entrepreneurial dairy farmers could close the gap but, he adds, “in the meantime, the opportunity is there to sell a lot of milk.”

Producers entering the market now can get a jump on building brand loyalty and creating long-term sales opportunities. As U.S. retailers (such as Wal-Mart and Costco) and European counterparts (Tesco, ALDI and Carrefour among them) enter China, they offer a natural path to market for their partner dairies, Shilk says.