Baby eels, also called elvers, are at the center of a lucrative business in Maine, which is home to the only large-scale fishing operation for them in the country. 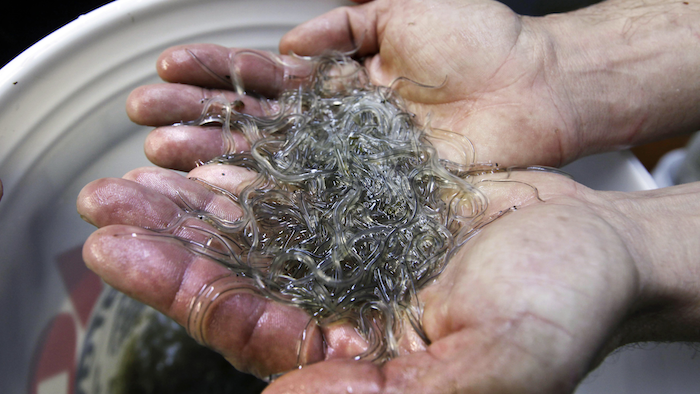 SOUTH PORTLAND, Maine (AP) — Sara Rademaker wants to give the East Coast's most valuable eels a much shorter commute from river to sushi roll.

Baby eels, also called elvers, are at the center of a lucrative business in Maine, which is home to the only large-scale fishing operation for them in the country. Fishermen sold them for more than $2,000 per pound last year, and they typically are sent as seed stock to Asian aquaculture companies so they can be raised to maturity and processed into sushi and other food products.

But Rademaker, a Maine aquaculture farmer, is looking to change all that and keep more of the state's valuable baby eels closer to home. She's operating a small eel farming operation in South Bristol, Maine, that raises the elvers so they can be sold live and fully grown to local restaurants.

Rademaker launched American Unagi in 2014 and sold her first eels to Maine sushi restaurants this summer. She is hoping to scale up production in the coming years.

"The local food movement is shifting toward seafood," she said. "Having products that are produced local, that have traceability, that can show they are sustainable is going to be important."

Eel aquaculture in America is underdeveloped, as most of the business takes place in Asia and Europe. Rademaker buys her elvers locally from purchasers who acquire them from Maine fishermen, and she is raising her eels at the University of Maine's Darling Marine Center. She said she expects to sell more than 2,000 pounds of the eels within two years.

Maine is one of only two states with an elver fishery; South Carolina's fishery is much smaller.

Rademaker has set an ambitious goal. America's entire wild-caught eel fishery, which is mostly centered around Maryland, only yields between 800,000 and a million pounds of eels per year. Wild-caught older eels, which make up most of the fishery, are worth much less than the baby eels Maine fishermen take from rivers and streams.

Rademaker recently received a nearly $50,000 federal grant to explore the possibility of processing the eels locally. The money will pay for hiring a marketing consultant, performing consumer testing and other planning associated with selling processed farmed-raised American eels.

For now, sushi restaurant owner Matt Howe is more than happy to buy live eels from Rademaker. Howe, who owns Sushi Maine in South Portland, barbecues the eels and serves them in a sushi roll with avocado.

"With the craziness of the unagi market, being shipped to Asia and being sold and shipped back over here, it's good," said Howe, using a Japanese word for eels. "We were thrilled to hear about the possibility of securing locally raised unagi."

The price of Maine's elvers has exploded during this decade, in part because of the collapse of European sources of eels.

Maine elvers typically were worth between $25 and $350 per pound at the dock up until 2011, when prices ballooned to $891. They have grown and fluctuated since, twice topping $1,800 per pound and reaching their high point last year at $2,172.

Elver fishermen typically fish for their quarry using dip nets along a riverbank. They are held to a tight quota system and reporting requirements because of the growth in value of the eels.

Darrell Young, co-director of the Maine Elver Fishermen Association, said he likes the idea of the state growing some eel farming infrastructure. But, for now, he thinks a lot of elver fishermen will stick to selling to their traditional buyers, which means lots of eels will keep going overseas.

"We're fishermen, and we're looking for the most money we can get," he said. "But it's good for the state of Maine," he said of Rademaker's efforts.