Octopi Brewing's sophisticated equipment and ambitious goals are poised to make it a major player in the burgeoning craft beer industry. 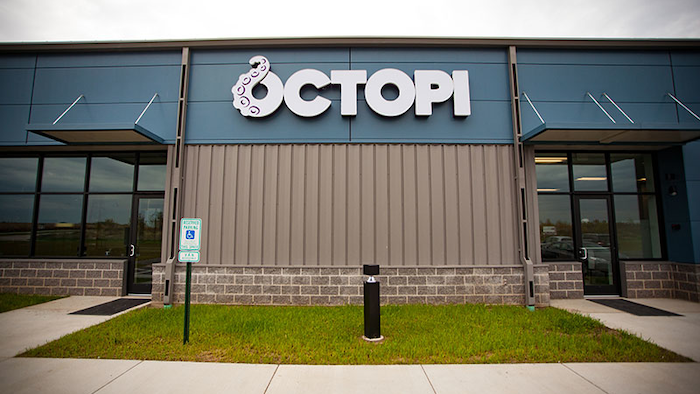 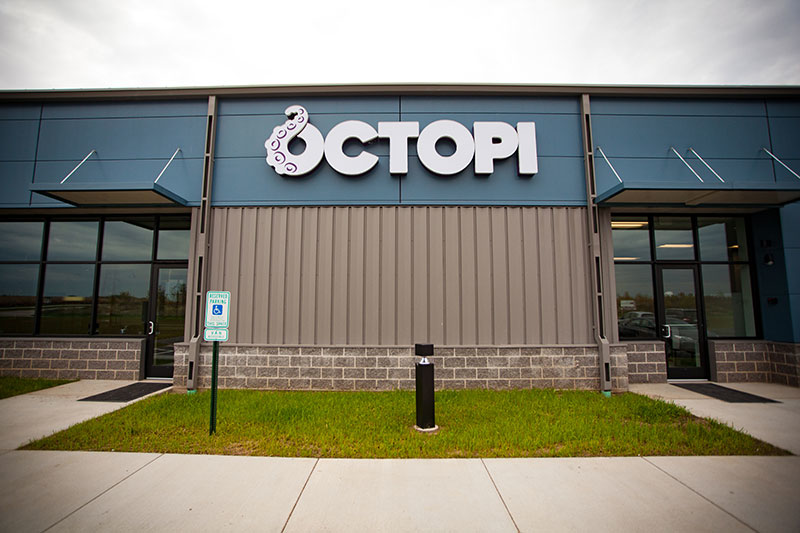 Wisconsin wouldn't ordinarily be confused for a state lacking in beer.

But Isaac Showaki saw a missing link in the regional brewing industry when he decided to start his next venture in the Madison area.

Showaki is the president of Octopi Brewing, which began brewing and bottling beer on behalf of clients in October.

Octopi isn't the only contract brewer in the Midwest — or Wisconsin, for that matter — but Showaki said that it is the first facility of its kind in the region.

The company focuses primarily on craft beer — which is growing rapidly despite overall sluggishness in the domestic beer industry — and seeks to accommodate even the most difficult or unusual demands of its brewers.

Showaki said that his company offers a "right-size approach" for smaller brewers due to lessons he learned firsthand in his initial foray into the craft sector.

"We are 100 percent flexible with what the client wants," Showaki said.

The typical image of a craft brewer is the at-home tinkerer — a beer lover with a straight job working on recipes in a basement or garage in his free time.

Eventually, after sharing his creations with friends and neighbors, he starts his own company and, with luck, finds his beer on sale in nearby taverns or stores.

Showaki, however, noted that he first learned the business side of the industry rather than the brewing side.

He got his start in consulting at Bain & Company in Chicago, where he worked on a project in Panama for Dutch beer giant Heineken.

"After that, I became the 'beer expert,'" Showaki joked on a snowy January morning in Octopi's taproom in the sleepy suburb of Waunakee.

He fell in love with the industry and, after stints in New York and Mexico City, returned to the Windy City some five years ago to fulfill his dream of starting a microbrewery.

His first company turned to contract breweries to make its beer.

"That turned out to be a complete nightmare," Showaki said.

He said that the young company faced problems with ingredients, packaging specifications and, most importantly, the quality of the beer itself.

Two years ago, Showaki left to start his second brewery and looked to fill the void that plagued the first. 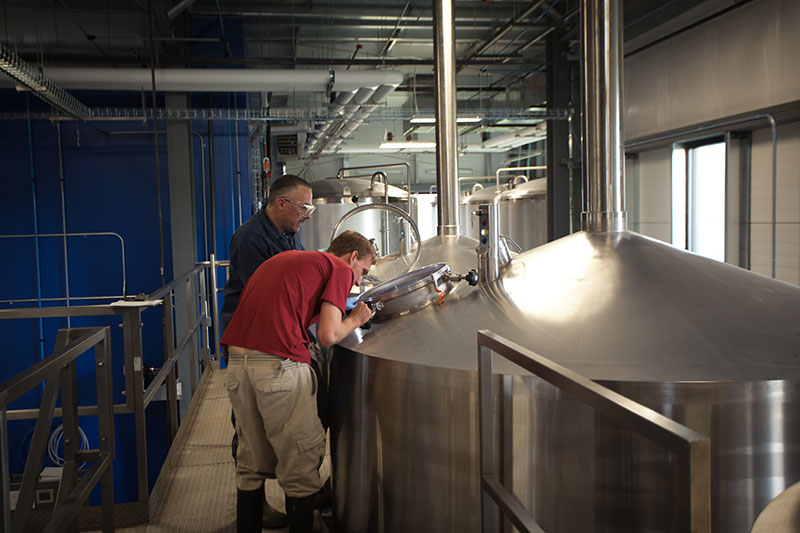 Taking The Next Step

Peter Gentry brewed beer out of his home for years before opening a small brewery and tasting room on Madison's near-east side in 2012.

Showaki said that One Barrel is the only client he's able to divulge at this early stage, but that Octopi is producing "all the beer for him that’s packaged."

Octopi’s contract terms stipulate an annual threshold for production, and Gentry said that One Barrel’s target of “basically 100 barrels a month” for one year “seemed like a big number to have to hit.”

He said that Showaki “was really confident” in their ability to meet that goal and that One Barrel’s production will exceed it with months to spare.

Gentry lauded Octopi’s flexibility for craft brewers and said that he found Showaki “at the exact right time” for his brewery, whose demand was far exceeding its capacity.

“It was actually a no-brainer for me,” Gentry said of enlisting Octopi.

Startup breweries like One Barrel are one of three distinct types of clients sought by Octopi.

For craft brewers that lack the space, financing or expertise to scale up their production, Showaki said that Octopi's operation offers them an opportunity to "build a solid base before they go on to the next step."

Gentry said that step will eventually be his own brewery, but that the current partnership allows his brand to grow without taking on millions in loans.

He conceded that it was “a challenge” to give up some control of his beer, but joked that expanding his capacity through Octopi will allow him to prove that the market will support recipes “that my parents like and my friends say are good.”

“It’s one of the best ways to sort of expand your brand and then get that control back,” Gentry said.

Octopi also targets established craft brewers strained by their current capacity, as well as private-label brands for retailers that hope to sell their own beer. Costco, Trader Joe's and Whole Foods are among the retail chains that sell an in-house beer brand.

Showaki wanted to stay in the Midwest to start his second brewery and eventually settled on the Madison area.

Not only is the city centrally located, but Wisconsin's German heritage created a near-inherent knowledge of beer among residents and maintained beer taxes that are the lowest in the nation.

Although Octopi hopes to work with Midwestern brewers first, Showaki said that his company provides an opportunity for brewers in other areas of the country as well.

Instead of spending thousands to truck beer from far-flung headquarters to Chicago, Octopi head brewer Mike Krause -- formerly of O’so Brewing, a craft brewery about 90 minutes to the north in Plover, Wisconsin -- can produce their beer a quick 150-mile jaunt up Interstate 90.

Showaki also said he's received inquiries from smaller brewers overseas that hope to break into the U.S. market. He mentioned interest from Europe, Israel and Costa Rica, and said that although those nations are behind the American craft movement, they realize "it's the future."

Showaki said that contract breweries are often either "too small or really, really big" for craft brewers, which could limit their growth on one end of the spectrum or compromise their quality on the other.

"Whatever you want to use, we're 100 percent game," Showaki said.

That could include everything from buying a fresh -- and more expensive -- batch of yeast to mimicking the water supply near a client's headquarters. Showaki noted that Krause, his head brewer, has a background in water chemistry.

The brewery itself teems with gleaming steel tanks and equipment, including automated fermenters and a hop dosing system, as well as a "hop back" to add flavor late in the brewing process.

A centrifuge whips the beer around in order to filter out any solids remaining in the brew, while a bottling line can push more than 9,000 of bottles per hour while taking on miniscule amounts of oxygen -- and thereby lengthen the beer's shelf life.

The bottling line was produced by KHS, a German manufacturer whose U.S. office is just down the road in Waukesha, Wisconsin.

Octopi will soon install a KHS x-ray system that can detect even tiny flaws in the final beer bottles -- the first of its kind in North America.

The brewery is also a zero-waste facility. Used ingredients go to a nearby farmer as either feed or fertilizer, while a specialist from Oregon's Deschutes Brewery designed a waste water system to balance the pH before water is released back into the environment.

"We overinvested in all the equipment to make sure that we're prepared," Showaki said. 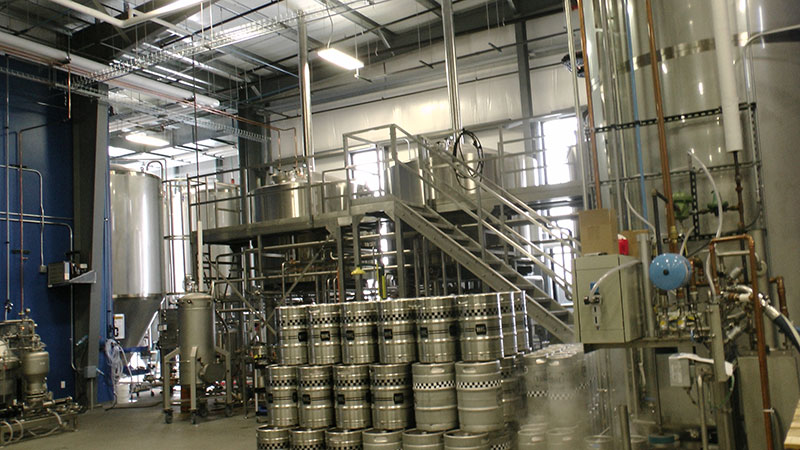 Although his brewery is only a few months old, Showaki noted that the craft beer industry is always thinking "20 steps ahead," and he maintains a pretty clear picture of how Octopi plans to grow.

The brewery, housed in a single building with its offices and taproom, has a current capacity of 13,000 barrels per year and is operated by nine full-time employees -- five in production and four in administration.

Showaki hopes to add two to three employees in production each year and develop a second and, eventually, a third shift.

The brewery plans to install a canning line in the near future, and Showaki said that brewery equipment "can always be optimized."

The addition of more fermenters alone -- something the current facility already has space for -- could increase its annual capacity to 65,000 barrels.

In three to five years, Octopi hopes to add a second building devoted entirely to packaging on its Waunakee property. That could increase its overall capacity to 150,000 barrels, which would be among the largest in the state.

Showaki said that increased production will allow Octopi to maintain its status as primarily a contract brewer even if its own line of craft beer takes off.

Between 80 and 85 percent of Octopi's capacity is devoted to its clients, while the remainder makes 3rd Sign, an in-house brand that Showaki said showcases the brewery's capabilities.

The brand is named for the third sign of the Zodiac -- Gemini -- and Octopi brewers introduced its initial offerings in twin pairs of mild ale and India pale ale, respectively.

3rd Sign's Madagascar Vanilla Mild Ale pours a golden hue in contrast to the darker Sumatra Coffee Mild Ale, while the Jungle IPA's citrus flavors are paired with the piney taste of the Forest IPA.

Octopi's bar -- comprised of wooden planks from Chicago's famed Navy Pier and a former ammunition plant in the nearby Baraboo Hills -- offers window views into the brewery and, like any honest Wisconsin tavern, a selection of bar snacks and frozen pizzas to accompany its 3rd Sign beers and rotating craft taps.

Although the tasting room can get crowded on weekends, the Octopi property -- located in a business park between sparse fields and a hockey rink -- appears more accommodating to industrial-grade beer-making than to bustling nightlife.

That's by design, Showaki said. Despite his ambitious expansion plans and heavy infrastructure investment, he expects that Octopi's contract beer output will continue to outnumber 3rd Sign at the current four-to-one clip.

"We want to keep it contract," Showaki said.