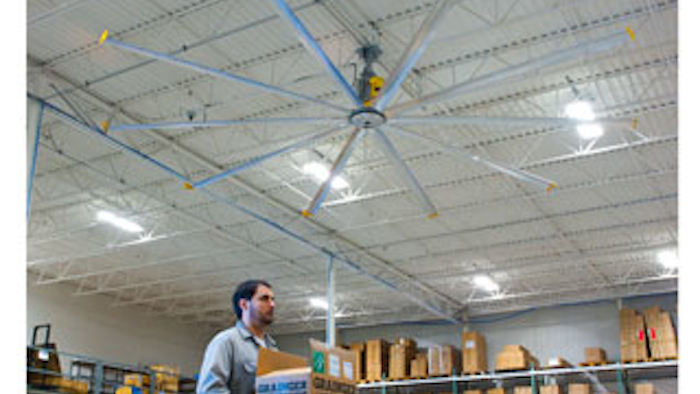 Unlike small ceiling fans that struggle to send air to the floor in tall spaces and only create small pockets of air movement at best, large diameter, low speed fans provide gentle mixing and stabilized air movement without creating a draft directly underneath the fans in winter, using patented airfoils and winglets to increase downward velocities.

Stratification occurs because hot air is approximately 5-7 percent lighter than cool air in a space and tends to rise to the ceiling. In the winter, large diameter fans can be used to destratifyheat by moving large volumes of warm air off the ceiling without creating a draft. The steady mixing of air creates a uniform temperature throughout the space. The energy savings achieved from reducing the amount of heat escaping through the roof is similar to turning the thermostat down three to five degrees, which can also translate to a serious reduction in operating costs.

Because these big fans use their immense size, not speed, to move a massive amount of air, they require minimal electrical input to run. Using the fans in conjunction with a mechanical heating system, it is not unusual to save a significant amount on energy bills by circulating the warm air throughout the space.

Even HVAC experts need a little help with airflow from time to time. Siefert MTM of North Kingstown, R.I., needed to bring energy costs down in its non-air-conditioned 19,000 square foot warehouse, ironically full of air conditioners and heat exchangers.

In the winter, hot air from the warehouse’s radiant heaters would congregate near the roof, leaving cold pockets at the workers’ level below.

“Knowing what we know about thermal technology, the heaters in the building are poorly placed,” said Logistics and Operations Manager Rob Granai of the heaters positioned in the upper corners of the warehouse. “Even when you cranked the heat up to 80, the heaters were just pumping hot air straight into the ceiling.”

Granai installed four 24-foot diameter fans, and immediately felt a difference on the floor. Seifert warehouse employees began shedding some of the heavier clothing they had been forced to wear, and Granai began thoroughly tracking energy bills. Throughout its first winter with the fans, Seifert MTM saved 30-35 percent on its heat bills. At this rate, the fans will pay for themselves in two years.

“I think that everybody was skeptical at the possible cost savings in the beginning, including me,” he said. “I just didn’t get it, but I’ve been proven wrong so far.”

When New Hampton Metal Fab put an 8,500 square foot addition on its northeastern Iowa metal fabrication facility in 2005, they didn’t expect that a supplemental space with a higher roof would be so uncomfortable.

Purchasing Manager Pete Gallup was looking to save on heating bills and to balance out temperatures during colder months. With 40-foot ceilings, the new space was known to have cold corners, where few employees wanted to work.

“All of the heat was going up,” Gallup explained. “We’d send somebody up to fix something and they would strip down to their long johns, while the guys on the floor were standing there in Carhartts, basically freezing to death.” As an added concern, wearing so much flammable clothing was a safety issue.

With the addition of an 18-foot diameter fan, the ceiling to floor temperature differential was brought down to less than 1degree F.

“Nobody would work back in those corners,” said Gallup. “But now anybody can work pretty much anywhere. The fan has made the temperature uniform all the way up.”