The long-term unemployed now make up nearly 40% of the jobless. 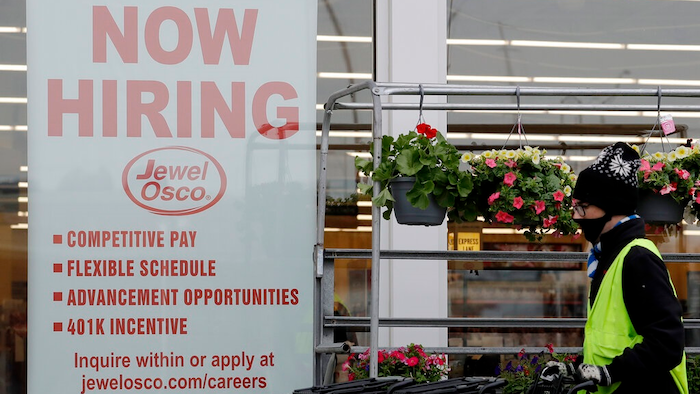 A man pushes carts as a hiring sign shows at a Jewel Osco grocery store in Deerfield, Ill., Thursday, April 23, 2020. Friday, Dec. 4, monthly U.S. jobs report will help answer a key question hanging over the economy: Just how much damage is being caused by the resurgent coronavirus, the resulting restrictions on businesses and the reluctance of consumers to shop, travel and dine out?
AP Photo/Nam Y. Huh

WASHINGTON (AP) — America’s employers sharply scaled back their hiring last month as the viral pandemic accelerated across the country, adding 245,000 jobs, the fewest since April and the fifth straight monthly slowdown.

At the same time, the unemployment rate fell to a still-high 6.7%, from 6.9% in October as many people stopped looking for work and were no longer counted as unemployed, the Labor Department said. November’s job gain was down from 610,000 in October.

Friday’s report of another hiring slowdown provided the latest evidence that the job market and the economy are faltering in the face of a virus that has been shattering daily records for confirmed infections. Economic activity is likely to slow further with health officials warning against all but essential travel and states and cities limiting gatherings, restricting restaurant dining and reducing the hours and capacity of bars, stores and other businesses. Most experts say the economy and job market won’t be able to fully recover until the virus is controlled with an effective and widely used vaccine.

Before the pandemic, last month’s job gain would have been considered healthy. But the U.S. economy is still nearly 10 million jobs below its pre-pandemic level, with a rising proportion of the unemployed describing their jobs as gone for good. Faster hiring is needed to ensure that people who were laid off during the pandemic recession can quickly get back to work.

Most of November's job growth came from temporarily laid-off people being recalled to their former jobs. For others, finding a new job has become increasingly difficult. People who have been out of work for six months or more — one definition of long-term unemployment — now make up nearly 40% of the jobless, the highest such proportion in nearly seven years. The long-term unemployed typically face a harder time finding work.

Friday's jobs report also reflects how the coronavirus has transformed the holiday shopping season. Transportation and warehousing firms added 145,000 jobs in November, more than half the total job gain for the month. That reflected rapid hiring by shipping and logistics firms that are benefiting from the surge in online purchases by consumers shopping at home. Retailers, by contrast, shed 35,000 jobs — a reflection of fewer consumers shopping in physical stores.

The impact of the pandemic was particularly visible on a category that includes restaurants, bars and hotels. This group added just 31,000 jobs in November. That's only about one-tenth of the gains of the previous two months and suggests that the virus spread, new business restrictions and colder weather are forcing many businesses to closer their doors or limit hours.

In a further sign of a weakening job market, the unemployment rate fell in November mostly for a discouraging reason: More people gave up looking for work, and were no longer counted as unemployed. The proportion of Americans working or looking for work has fallen to 61.5%, the lowest since 1976.

Two enhanced federal unemployment benefits programs are set to expire at the end of December — just as viral cases are surging and colder weather is shutting down outdoor dining and many public events. Unless Congress enacts another rescue aid package, more than 9 million unemployed people will be left without any jobless aid, state or federal, beginning after Christmas.

Friday’s report coincides with renewed efforts in Congress to reach a deal on a new rescue aid package. A bipartisan group of senators has proposed a $900 billion plan that would include expanded unemployment benefits, more small business loans and aid to state and local governments. But there are no signs of any imminent agreement.

The gravest threat to the economy remains the raging virus, and most experts say any economic recovery depends on how fast an effective vaccine can be widely distributed and used. U.S. deaths from the coronavirus topped 3,100 Wednesday, a new high, with more than 100,000 Americans hospitalized with the disease, also a record, and new daily cases topping 200,000. In response, at least 12 states have imposed new restrictions on businesses in the past month, according to an Associated Press tally.

For now, there are signs that the economic recovery is stumbling. Consumer spending grew in October at the slowest pace in six months. Seated diners at restaurants are declining again, according to data from the reservations website OpenTable. And a Fed report on business conditions found that growth cooled last month in several Midwest regions and in the Fed’s Philadelphia district.

Still, the full impact of the worsening pandemic may not be evident in Friday’s jobs report, which measures hiring trends in the middle of the month. Some state restrictions weren’t imposed until later in November. As a result, some economists say the worst consequences of the pandemic won’t appear until the December jobs report is issued in early January.

Union Pacific maintains that it is taking appropriate precautions, but unions disagree.
Dec 23rd, 2020
Follow Us
Most Recent